Professional athletes have the good fortune of living out their childhood dreams and making a fortune doing it. But while money is a strong motivator, the best athletes play out of pure passion. Nowhere is this truer than with professional bull riders.

For these men, eight seconds of holding onto a two-thousand-pound bucking beast hellbent on hurling its rider to the ground can feel like a full four quarters, nine innings or longer. Those eight seconds constitute a complete ride.

"It's almost like a car crash -- everything happens so fast, but everything slows down," explains Luke Snyder of the Professional Bull Riders (PBR) league. "Within eight seconds, so much happens. Two minutes before, the adrenaline kicks in. It's almost like your body puts in the right amount of adrenaline for the job, to get on a bull and stay on something so big."

Snyder, 29, started riding bulls as a 9-year-old attending rodeo camp. After three days, he was hooked.

Fellow PBR competitor, 30-year-old Colby Yates, started at age 8. Raised in a family of cattle ranchers, he followed the footsteps of his father and brothers.

Dressed in traditional western attire, these bull riders look like cowboys with a death wish -- but there is an art to their sport. Technique is key to both scoring points and simply staying alive. 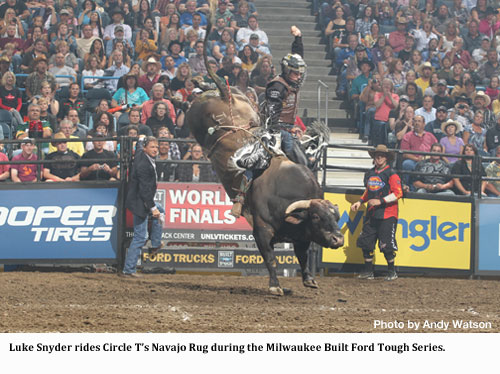 According to Snyder, you've got to be in sync with the bull, which basically moves in four directions: up, down, left and right. A fast bull can jump 15 times in eight seconds. "It's like a rocking chair, you want to ride with them," he described. "But you don't get too lazy with it."

Riders must hold onto a rope with one hand while keeping the free hand from touching themselves, the bull or the ground.

Like any sport, physical conditioning is a must. A strengthened core allows the rider to stay in movement with the ever-shifting, spinning, and twisting bull. And staying lightweight gives the bull less to throw.

"There's so much momentum as he's bucking, if you're big, as soon as the bull jumps forward, you're going to take it," Yates says. "If you're 150 vs. 200, there's a big difference in how the bull throws you. It helps us to be light and quick."

These PBR athletes have to be just as tough mentally: "It's really easy to overthink this sport," Snyder says. "The hardest part is waiting around, riding in your head before you start."

It should be noted that while these bulls appear to be bucking in fury, they aren't angry. Contrary to popular belief, nothing is done prior to the ride to anger the animal.

The buck is simply bred into them. Professional bulls are like racehorses, descending from long lines of buckers. To help encourage kicking and to bring out a bull's full potential, a flank rope is tied around the bull's waist, just loose enough to make him think he can get it off, but tight enough to stay on.

With individual values nearing one million dollars, hurting them is the furthest thing from anyone's minds. 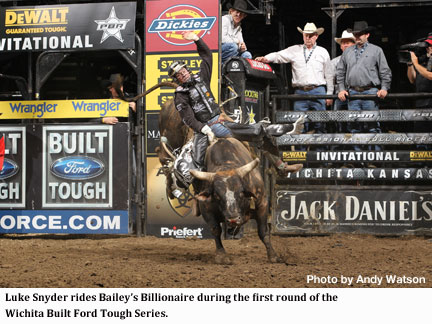 "Owners treat them like family," Snyder says. "Some are treated better than kids. Some won't drink anything but bottled water and are fed strict diets."

And it would seem the bulls actually enjoy the sport. According to Yates, the various bulls often exhibit their own personalities.

"One used to do a victory lap after bucking guy off. Another, Little Yellow Jacket, would buck the guy off, then turn and pose -- he was one of the greatest ever," he says.

Points are scored based on the time they remain on the bull, along with the form and style presented during the ride. It must appear that the rider is in complete control. An eight-second ride which appears effortless can earn 50 points. The bull is then also scored based on his aggressiveness, with the potential to also rake in 50 points.

Of course, should the rider make it to eight seconds, he has to dismount. And it's not like the bull stops to make it easy.

"You gotta ease up and find a good spot to get bucked off. You stop trying and they take care of the rest," Snyder says.

Three bullfighters assist the riders once they've hit the ground. They have the important and ridiculously dangerous job of distracting the bull so it doesn't chase the rider as he makes his getaway.

"They're the toughest people I've ever met," Yates says.

While they both admire the bullfighters' toughness, theirs can't be overlooked. Snyder and Yates have broken nearly every major bone in their bodies -- including the neck.

"But we always can't wait to get back," Yates says. "We'll cut corners to get back quicker."

Some injuries, such as a shoulder rotator cuff surgery, can keep them out of action for 6 months; others 2-3 weeks. If it's a minor injury, like a groin pull or a dislocated shoulder, they don't bother taking any time off.

"You can fight through that," says Yates, who claims he's endured at least 38 concussions. "It's no candyass sport. It's something you gotta toughen up to go with."

Clearly, the injuries don't give them second thoughts about their sport. "The day you think you should do something else you probably should," Snyder says. "Because your heart has to be in it. You have to be willing the pay the ultimate price."