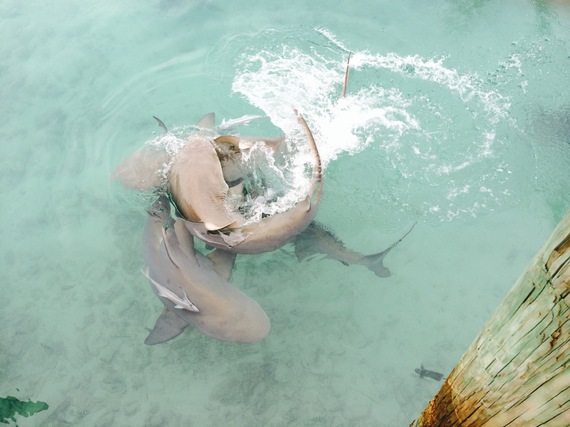 Most of us can eventually get used to almost anything -- natural catastrophes, war, even scores of huge aggressive sharks inhabiting a tranquil place such as the Big Game Club Marina on the Bahamian island of Bimini, my favorite boating retreat that I often daydream about when I'm back at my desk in New York. And in truth, after a few days visiting the Club, the new resident bull sharks, considered by many experts to be the most dangerous for humans of all sharks, had become part of the seascape along with astonishing bloody sunsets spilling across the harbor, the windswept mangroves to the east, swaying palms, pelicans on the pilings. I found myself looking forward to seeing them in the morning. I noticed that in the afternoon the sharks didn't swim around so much. Rather, they seemed to take up positions in the empty slips of the mostly empty boat basin, one or two enormous sharks to a slip, facing the current while hanging almost motionless like sentinels, waiting. It was fascinating to watch them. And I had the sense that they were watching us as well.

The bulls were waiting until 4 p.m. when a congenial man on the south dock would begin to throw fish guts and filleted carcasses imported from Nassau in the water and the sharks would school up and attack the chum in a frenzy that delighted and thrilled the audience of 30 or 40 tourists who came by to watch these daily feeding events.

Now it was about five o'clock, and my old friend James Rolle and I were back on the end of a dock, with sated sharks (or so we were told) finning out beneath our dangling feet, four large ones at the moment. Jim wanted to finish telling me the story he'd started three days earlier of a fishing day in the spring of 1962. My friend is implacable by nature, but this afternoon he had an unfamiliar urgency about imparting this story, which made me think of Coleridge's great poem, "The Rime of the Ancient Mariner," in which an old seaman needs to tell his tragic tale as expiation for earlier sins. Jimmy continued: 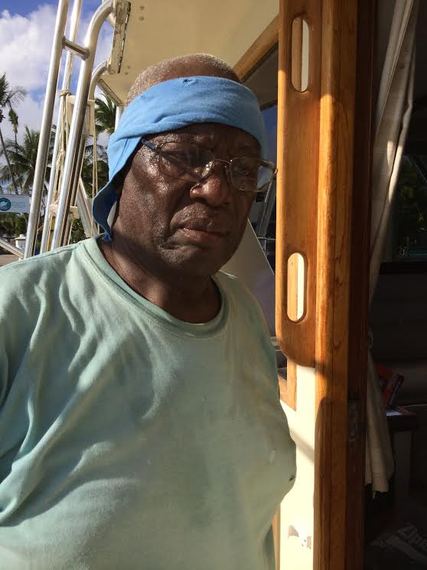 So when we get back from the morning fishing trip and hang up the marlin and sailfish, there was three guys waitin to talk. They want me to carry em down to Cat Cay, 10 miles to the south. I was happy to go. It was May, which is tuna time and lots of the Bimini fellas down there fishin on the boats for giant blue fin. My good buddy Bradford Banes was mate on one of the boats. Banes was a great fun loving man. He'd been away fishin for two, three weeks and I miss hangin out with him.

These fellas wanna troll to Cat Cay, and stay there couple hours, have dinner with one of the rich homeowners they knew, and ride back.

'Two-fifty for the day and an extra 150 because I'll have to bring you back in the night.'I was on a roll, Fred. I coulda charge em anything. Everythin breakin my way. I want to go down to Cat Cay to see Banes and these guys payin me 400 dollars to do it.

We troll down and watch this pretty sunset peekin through some clouds that was makin up in the west. We catch another marlin and turn it loose. Fred, there was so much fish back then. I tell you, guys down in Cat Cay were killin giant tuna. Boats catchin six and seven fish in one day. But they don't know about keeping tuna fresh back then. They pull a thousand pounder in the boat and it be spoil by the sun in two hours. Fellas weigh the fish at the dock, snap a picture and then roll it back into the water for the sharks.

Banes was waiting for me when we get into the marina. 'Jimmy, look to the west, man. For sure big storm comin at us. You can't go home tonight, man. Weather bad.'

We could already hear thunder and sky in the west lit up with fireworks. Banes right. We'd have to sleep on the boat and try going back in the mornin. So Banes and I went down to Louistown. That's what they call black town on Cat Cay. All the mates was there and some good lookin Bimini girls that work in the houses of rich white folks. We shot pool and whatever else goes on in the bar down there. Banes telling his jokes. I love that guy.

Around 8:30 I say, 'Let's go back to the boat case my people come down and I'll tell em we ain't goin tonight.'

'No way,' says Banes. But we get to the dock, the three white guys already waitin and they want to go back. They don't know nuthin about storms at sea. Baines was readin my mind. He says, 'Jimmy if my mommy was laid out on Bimini this night I wouldn't go out there in that storm. Look at the fire in the sky, man.' It was true. Lightnin just explodin on the water. Banes was begging me not to go like he knew something terrible gonna happen. And I should of listened.

But I was a young man and believe nothin bad could happen to me. I thought I could walk on water, Fred. All the older fellas with years on the sea were frighten and telling me not to go. I guess that also gave me a push to do it.

'Oh no, Jimmy.' That was the last thing Banes said to me. When you young you just do stupid things.

Jim paused to look at the restless sharks. By now there were two big kids from one of the yachts standing beside us on the dock watching the sharks. One of them had brought the carcass of a bonito from the morning's fishing, and he started cutting off scraps and throwing them into the water. As soon as the kid did this three more bull sharks appeared from under the dock, same size as the others.

The weather was real bad. Even with a spotlight I couldn't see 50 feet in front of the boat. I just idlin my way ahead, three four miles an hour. We was gettin thrown around, water breakin over the bow and any second seem lightnin would burn up the boat. In that tumblin around the compass was spinning like a wheel, one way, then the other. I couldn't hold a course. I was afraid we'd hit Piquet Rock or one of the Turtle Rocks. No one would ever find us in that rough ocean.

I was a blind fella with sheets of water in my face, feeling my way. Every time lightnin hit the water I stare ahead and try to glimpse a rock. I pick my way from one rock to the next, like I was rock climbin or something stead of running the boat. I wait for a burst of light and then I see a rock and get my bearing for a minute or so. But Fred, I never thought we wouldn't make it back. I was tellin myself, I'd show Banes and the guys. No one else would have tried it on such a night but I did.

After three hours I spot the light on the end of South Bimini. Then I can see the harbor mouth and soon we inside. We made it okay. I felt like a king. White fellas gave me $100 tip. I made it through the storm and I had $1000 in my pocket for one day's work.

By now eight or 10 bull sharks were swimming beneath us, maybe more. It was hard to say exactly how many because they were cutting back and forth, a hunting pack incited by the taste and scent of tuna, gulping scraps of bonito, as if spurred by some nascent memory of giant blue fin that once proliferated here. The kids were enjoying the mayhem, with little or no sense for the danger below or the portent of what we were witnessing. If one of them had tripped and fallen off the dock he wouldn't have survived for half a minute.

These wild creatures had been trained to show up afternoons at the bull shark feeding station. The congenial man who feeds them had decided or hoped or had been informed that by chumming the water he would be rendering the sharks docile. Maybe he was right. Maybe he was turning bull sharks into Labrador retrievers. Maybe nothing bad would happen, visitors would be entertained, and one day the sharks would swim away. But if a child fell off the dock and was eaten or an unsuspecting swimmer lost a leg, a second tragedy would quickly follow. Good men would come to the dock with chum and rifles and slaughter the entire population of sharks and feel righteous doing it.

Sad ironies were abounding in this marina. Now with few marlin and no more giant blue fin brought in to the dock, the folks here were apparently trying to evoke former glory days by showing off a pack of large aggressive sharks and in doing so, perhaps putting them in peril. Intuitions, hubris and greed are wild cards that can lead writers and fishermen and lion trainers to genius endeavors or to catastrophe. I was musing upon the sharks and how it would end when my friend interrupted:

The story isn't quite finished. Around ten the following morning Bradford Banes decide he wants to get back to Bimini to see his family. He went to the captain of his boat, guy named Eddie Wall and say, 'Cap, let's go home.' Wall don't want to go because the seas were rough. Banes push him and argue if Jimmy could do it, they could make it easy. Their boat was a lot bigger than mine.

There was no more lightnin but the wind was now blowing hard from the west. When it blows that way is a big surge comin cross the sand bar there in front of South Bimini. A boat has to get through big breakin water to get in the harbor in such wind. When they get off Sunshine Inn, their boat was caught in the surge and went onto her side. Brad sittin on the bridge on one of the chairs with his arms fold like he had no concern in the world. When the boat roll, Brad was tossed right into the water. There was fellas working outside the Sunshine Inn, they see when he went over. They search the beach but they couldn't find Brad.

"They never found the body, Jim?"

"Three days later my mommy saw a body lyin on the beach or the remains of a body. She call some neighbors and they pull him out. Then Ansel and I made a rough box. We knock it together in a few minutes. We wrap Banes in a sheet and put him in the box. Same time we was making the box, the fellas were diggin the hole."

"He should have been holding on, Jim."