It takes balls to take a gunshot to the testicles.

But it's the only way Jeremiah Raber can test his invention, a bulletproof jockstrap.

Raber, 38, is the man behind Nutshellz, a brand of athletic cup designed to protect a man's testicles from anything coming their way -- from a 98 MPH fastball to a 1700 MPH bullet shot from a gun.

Raber originally devised the product after watching his favorite MMA fighter lose a match after getting kicked in the family jewels.

"I didn't expect to leave the bar that night thinking about the best ways to protect a pair of testicles, but I just thought there had to be a better way to absorb the shock from a misdirected kick to the groin," he writes on his website.

Since then, Raber has been going nuts trying to make the strongest jockstrap known to man.

Nuttshelz are being used by athletes, but most sales are to military, police officers and SWAT teams.

Now he is trying to raise $30,000 on Kickstarter that will be used to make a smaller version for boys.

Only $1,155 has been raised so far, but Raber is hoping to gun up contributions by showing just how effective his product is -- by having himself shot in the nuts.

Barcroft TV has filmed the excruciating ordeal. If you can handle it without cringing, you can watch Raber take one for the team in the video above (don’t worry, he doesn’t lose any… limbs). 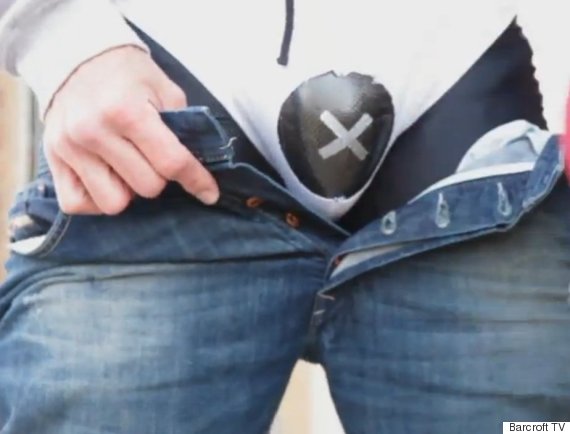