MADRID, July 9 (Reuters) - A bullfighter and a man participating in a village bull-run were killed in Spain on Saturday, while another two men were gored by the animals at the world-famous festival in the town of Pamplona.

Victor Barrio, a 29-year-old professional bullfighter, was killed when a bull’s horn pierced his chest in front of spectators as he competed in a fight in the town of Teruel in the eastern region of Aragon.

His death, shown live on television, was confirmed on the website of Madrid’s Las Ventas bullring, where Barrio began as an apprentice bullfighter in 2010. He is the first Spanish bullfighter to die in a ring since the turn of the century.

In the southeastern village of Pedreguer near Valencia, a 28-year-old Spaniard was killed during a bull-run, in which people risk life and limb by racing alongside specially-bred fighting bulls through narrow streets.

A bull’s horn pierced his lung and heart as he was trying to help another runner during the event, in which a man was killed last year, a spokesman for the regional government said.

The San Fermin festival, in which bulls chase red-scarved runners through Pamplona’s cobbled streets during nine days of events, attracts thousands of revelers from Spain and overseas.

In Saturday’s run there, a 33-year-old Japanese man was gored in the chest and a 24-year-old Spanish man in the arm, while 12 others suffered minor injuries, the local government said on its website.

The Japanese man was in a stable condition in hospital, a spokesman for the festival said.

The four-minute run in Pamplona featured six bulls from the Jose Escolar ranch, one of which separated from the rest and caused panic among the runners.

The daily bull-run along an 825-meter stretch of narrow streets in Pamplona’s old town starts at 8 a.m. (0600 GMT) and usually lasts between three and five minutes. There are eight runs in total during the festival.

Over the past century 15 people have died in Pamplona’s event, which dates back hundreds of years, according to a count on the unofficial San Fermin website. The last death was recorded in 2009.

(Reporting by Eloy Alonso in PAMPLONA and Maria Vega Paul in MADRID; Writing by Angus Berwick; Editing by Andrew Roche) 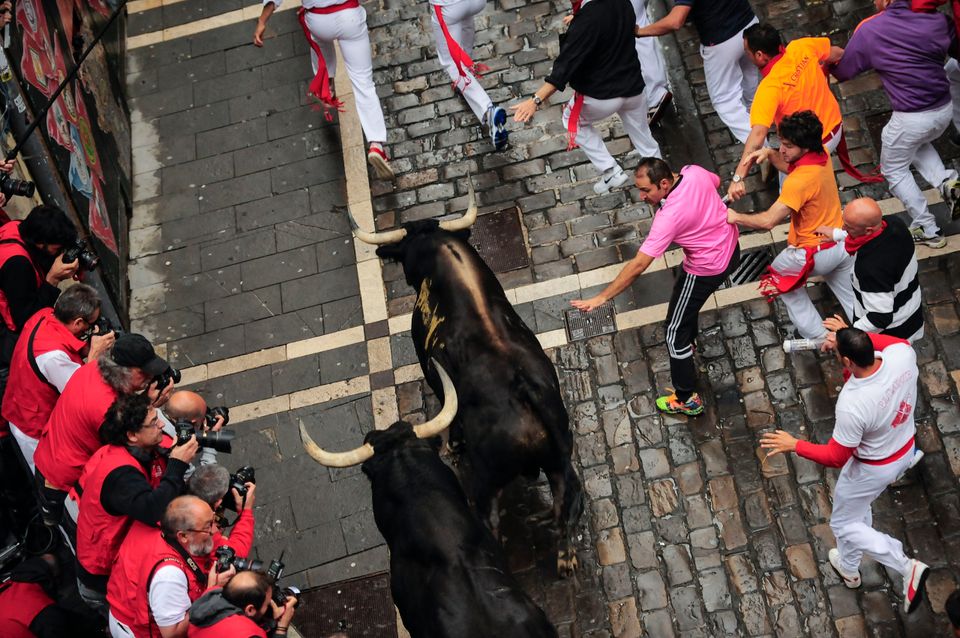 1 / 29
Revelers run ahead ''Victoriano del Rio Cortes'' fighting bulls on Estafeta corner during the running of the bulls at the San Fermin festival in Pamplona, Spain on July 9, 2014. (AP Photo/Alvaro Barrientos)
ASSOCIATED PRESS