Bullying and cyberbullying are topics that won't grow old until they become extinct. We can't stand idly by until that day arrives.

As communities, as families and as a country, we need to continue to educate and inform one another about the tragic and sometimes dire effects of bullying and cyberbullying. We need to rally to combat those dangers, and heal the damage they inflict.

Since bullying doesn't take time off during the summer, help your kids to use their vacation time proactively. Encourage them to form an anti-bullying group. It's the perfect time and opportunity for teens to organize their friends and be prepared for when the new school year rolls around.

Check out the free anti-bullying resources that are already available to you and your community. willUStand.com offers free posters, for example. willUstand is an organization founded on the belief that bystanders can make a difference; when someone stands for someone else, they inspire hope. It is a great place to start.

SmartSign's #TakeNoBullies offers a wide variety of social media specific anti-bullying stickers and pins. Their savvy slogans speak volumes, and are perfect tools for any anti-bullying effort that seeks to promote positive interactions among teens online.

Recently, I interviewed Mike Miles from SmartSign about the #TakeNoBullies mission after seeing their success and wide-reaching audience on social media.

What prompted SmartSign to launch the #TakeNoBullies campaign?

Everyone is accountable -- individuals, communities, and businesses included -- for society's wellbeing. The fact is that society now exists online as well as offline. Ninety five percent of teens use the Internet, according to Pew Internet's "Teens and Technology 2013" report this March. Widespread digital connectivity benefits our communities in countless ways, but there are lurking dangers. We need to identify negative influences and cultivate a web that promotes respect and kindness among this generation of kids, who are the world's future leaders. #TakeNoBullies is our response to providing an example for other companies to spread awareness that it's crucial to raise a healthy, empowered generation.

Your stickers and pins are fantastic! What is the best way schools, parents, kids and communities can use them?

That's the focal point of #TakeNoBullies: to reach the most-affected people involved with bullying, online and offline. Cyberbullying has become a complicated issue for schools especially, since harassing peers on social networks is happening off school grounds, yet it often spills over to the classroom. The stickers and buttons provide a visual reminder for libraries, classrooms and computer labs to tap into the social media platforms where the incidents themselves are taking place. They project the potential impact of what you're about to post or tweet. Also, they are targeted at empowering bystanders, one of the most important ingredients in curbing bullying.

You mentioned to me you loved creating projects when you were younger (which wasn't that long ago -- your words). Can you share with us what types of summer projects kids can do this summer to help prevent bullying and cyberbullying?

As far as I'm concerned, I'll always be young at heart. I think that mentality helped shape the core of the campaign. Growing up, I was constantly involved in sports, but also had a year-round passion for writing stories and haikus; I believe the slogans are a reflection of that -- painting a metaphorical picture with limited words is poetic in its own sense. Use this impulse to help kids proactively address bullying. Challenge kids to utilize their creativity in an uplifting way. Whether it's designing graphics or artwork with an anti-bullying theme, or creating fictional characters for a comic or short story. On the same token, encourage children to collaborate. Teens can team up to create an anti-bullying and digital responsibility campaign of their own on social media, where their peers can share their contributions in a healthy competition. Working together on projects shouldn't stop once summer break arrives -- collaboration is a theme to stress even when in recess.

What is your favorite slogan and why? 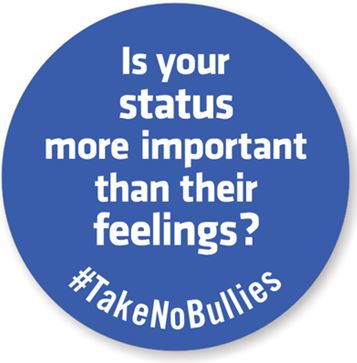 "Is your status more important than their feelings?" because of the imagery it conjures up. Facebook is a hub for social media, especially with teens. It only takes a click of the mouse to emotionally scar another person. Are your two sentences worth the damage that they'll inflict on your victim? Sadly, as cyberbullying is often done anonymously, the victim can feel helpless not knowing the source and reasoning behind the aggression.

• Libraries are a great place to start your local anti-bullying group. Don't delay, start today!
• Once you create your group, let everyone know, including your local newspaper.
• Parents, you are your child's role model -- lead by example. If they see you bullying (gossiping) or simply not being nice online, children (even teens) will mimic their parents.
• Be kind online - it's a cliché but always worth repeating.

By the time school opens again, hopefully the summer anti-bullying groups will be ready!