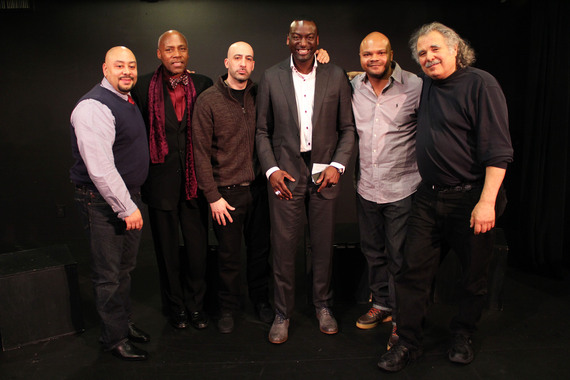 Saturday, Feb. 7, was the third time I saw The Bullpen by Joe Assadourian. Assadourian is one of those break-out stars in the vein of Keenan and Damon Wayans and John Leguizamo. Like them, he draws from his New York experiences to bring characters to life. On this occasion, three of the Central Park Five were in attendance. They participated in a panel discussion with Assadourian after the show. The Bullpen addresses Assadourian's encounter with the New York criminal justice system after a nightclub scuffle left one man wounded in the buttocks and Assadourian charged with assault. He offers a humorous glimpse into the flaws of the justice system. However, as Mr. Assadourian aptly states, "It is hard enough doing time when you're guilty, but when you are innocent?!" That statement summed up my curiosity about the attendance of the Central Park Five. Would they find humor in Assadourian's performance after being villified by the media and unjustly incarcerated? But the laughter of the Central Park Five was like medicine to the heart. Raymond Santana Jr., Yusef Salaam, and Kevin Richardson exuded a power of forgiveness, graciousness, and resilience that I cannot begin to understand after their horrific ordeal.

In 1989, a woman was brutally beaten and raped while jogging in Central Park. The police rounded up five teenage boys between the ages of 14 and 16, all African-American and Hispanic, and accused them. A media firestorm ensued, with the boys being vilified as the worst of humanity, deserving of death by electric chair. Donald Trump led the charge in assigning them guilt before the trial had even taken place, taking out full-page ads in several New York newspapers. Although none of the DNA or physical evidence supported the charges, they were convicted of the beating and rape of the Central Park jogger, who later was identified as Trisha Meili. The teenagers spent seven to 13 years in prison until another inmate, Matias Reyes, confessed. Reyes' DNA matched the semen from the rape of Trisha Meili and other rapes during that time. Despite DNA evidence exonerating the Central Park Five of wrongdoing, Donald Trump and others within the justice system continue to disparage them, alleging that they must be guilty of something, scientific evidence be damned!

Joe Assadourian saw the Central Park Five documentary while serving time at Otisville Correctional Facility. He commented on how surreal it was that, just a year ago, he was in prison watching their story, and now Raymond, Yusef, and Kevin were here watching him perform. His pivotal statement: "It is hard enough doing time when you're guilty, but when you are innocent?!" Joe credited his director, Richard Hoehler, for providing writing workshops at Otisville as therapy and a tool to make him productive after his release. Richard Hoehler has provided writing and acting workshops at Otisville -- unfunded -- for the past two years.

Raymond Santana Jr. said that watching Assadourian perform was "bullpen therapy." He could relate to every character portrayed, particularly because he was not released on bail. He spent 17 months in the bullpen before being convicted and transferred to a juvenile detention center and later prison. Exonerated in 2002, after spending their youth and young adulthood in prison falsely, they were simply released as if nothing had ever happened. Not until the 2012 documentary, Central Park Five, were their voices and story finally heard. Attending Assadourian's show was part-therapy. Santana stated that being in prison is lonely, and that without support from family, anything is liable to happen to you. "Prison can kill your spirit, a social death," he said. The documentary gave them a platform. When I asked Raymond about his impressions of the controversies surrounding Ferguson, Eric Garner, and Trayvon Martin, he replied that the Central Park Five were the original "stop and frisk." Like Michael Brown, they were demonized in the media. There was no "innocent until proven guilty," because the media had already convicted them.

Assadourian responded that until his experience in the bullpen, he always wondered: How could a confession be coerced? He equated being in the bullpen to torture. You are awakened at 4 a.m. for trial and not returned to the bullpen until 11:30 p.m., and awakened again at 4 a.m. the next day, and the cycle continues. He noted that it causes such a state of delirium that you would confess to anything just to stop it. It reminds me of a similar situation in Chicago in the 1980s. Under Police Commander Jon Burge, police used torture tactics, electric shock to genitals and plastic-bag suffocation to make people arrested for traffic violations confess to heinous crimes. Over 100 African-American men were convicted during Jon Burge's reign. The torture scandal was a well-known secret within the police department and to State Attorney Richard Daley, who later became the mayor. While State Attorney, Daley prosecuted and requested the death penalty in cases where police torture was utilized. Some people continue to believe that the men had to be guilty of something or they would not have confessed. For such people, to believe otherwise is an acknowledgement that the police and state attorney conspired to convict innocent men to build their careers and political profile. We all know that that sort of thing does not happen in America.

Yusef Salaam commented that Assadourian's show was the most amazing thing he had ever seen. He too was able to relate to the characters. The Bullpen was helpful because they received no therapy or counseling after they were exonerated. Even now, he cannot take the subway because being too close to people brings back memories from time in prison, where closeness meant danger. He wished programs like the one available to Assadourian at Otisville were at more prisons. He used poetry as a way to release his feelings. At his sentencing hearing, he rapped his statement to the judge in lyrical verse later used in Spike Lee's Do the Right Thing, which the media slammed as Salaam bologna.

Kevin Richardson called Assadourian's performance hilarious and raw. He was in the ninth grade when they were arrested. He recalled walking down the street and people pointing, saying, "That's the rapist." Those words hurt, because he was raised by women and around his sisters.

Assadourian stated that prison is all about punishment, not rehabilitation. Yet something must be done to help those coming out of prison so that they have options. Richard Hoehler's writing program at Otisville gave him options such that when he was released, he immediately started performing The Bullpen. What started as a nine-minute piece for a writing workshop evolved into the 70-minute performance. Assadourian has been auditioning for other roles. None of these opportunities would have existed but for Richard Hoehler's programs at Otisville.

I asked Raymond Santana Jr. why he agreed to do a panel discussion with Assadourian. He said that it was right up his alley and there was an immediate connection. Although the media, city, police, and district attorney never apologized for their part in this miscarriage of justice, he has forgiveness. He channels that energy into speaking to kids and getting their story out.

Aesop said it best: "No plea from the innocent will save him from an unjust judge." While the city and Donald Trump railed against the Central Park Five as despicable monsters, they instead have chosen to show forgiveness toward a system that is terribly flawed and in need of repair. Until we acknowledge that our criminal justice system is broken, miscarriages of justice on behalf of prosecutors abusing discretion and law enforcement acting without impunity will continue.

To experience The Bullpen, be sure to catch Joe Assadourian's performance at the Playroom Theater by March 21.