Prejudice is alive and well in the insurance industry. Every day thousands of "bully breeds" (pit bulls, German shepherds, Rottweilers, Akitas, etc.) are euthanized because they cannot be adopted. Why? There are many people out there that would happily adopt one of these breeds, but many insurance companies will not cover their homes with either renters' or homeowners' insurance. Four out of five dogs in shelters are considered bully breeds, and many of them won't ever find a home. We need to tell insurance companies to stop banning these amazing dogs because of undeserved stereotypes! Each and every dog deserves a chance at a happy life with a loving family, but many will never know what that's like because of the breed they were born as.

Refusing to insure families with dogs that look "scary" or have certain stereotypes is horrendous. Perhaps rather than immediately denying a family with a certain breed of dog, companies should have a system where they meet the beloved pet and approve or deny them based on an interaction. Insurance companies may argue that this would cost too much. In just the first six months of 2012, insurance companies made $6.458 billion. They can afford it. A checklist of sorts should be created based on the animal's temperament and vet history and even the family's history of owning pets previously. They should have incentives to lower insurance rates by showing good behavior, keeping up with going to the vet by getting the necessary vaccines and also spaying and neutering. 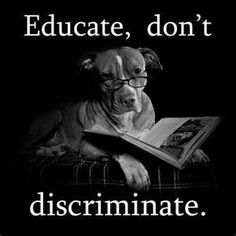 I've heard stories from friends and family saying, "My insurance went up because I got a German shepherd," or, "I want to rescue a dog, but I can't get one, because I won't be able to get an insurance policy." The one I hate the most is "I had to give up my pit bull otherwise I couldn't move into my new apartment." My belief is that if you own a dog, don't give it up! Do what you can to make sure that pet stays in his or her forever home. There are some insurers out there that will work with you!

Personally, I have a 3-year-old female pit bull mix. When I found my fur baby, she'd been horrifically abused and buried alive. After having to undergo the amputation of one of her rear legs, Bella is the love of my life. People see the word "pit bull" on paper and immediately turn their head, but every single person I have ever come in contact with while owning this dog stops and says, "Aw, she's adorable!" or, "What a beautiful dog! What kind of breed is she?" Once I respond with the words "pit bull mix," I tend to get mixed reactions. It could either be "I love that breed" or "Oh, I don't like pit bulls. They're too dangerous."

In my previous apartment I applied for renters' insurance. They of course have to ask many questions about your home and any other policies you have, then the dreaded dog questions come:

"Great. What breed of dog do you have?"

"Well you need to be more specific, because we only will provide renters' insurance to certain breeds."

At this point I became nervous with my answer, so I asked what breeds would be excluded from their approval. They responded with the following breeds: pit bulls and Staffordshire terriers, Doberman pinschers, Rottweilers, chows, Great Danes, Presa Canarios, Akitas, Alaskan malamutes, German shepherds, Siberian huskies, wolf hybrids or a mix of any of the above.

A study from the Applied Animal Behaviour Science journal says that large dogs, often pigeonholed as the dangerous breeds, aren't any more likely to bite than small ones. Siberian huskies and greyhounds, to name a couple, scored as very calm dogs, and even pit bulls and Rottweilers registered average or below-average with aggression. The ever-so-tiny dachshund, meanwhile, ranked as the journal's most aggressive breed, with Chihuahuas coming in second. To put it simply, liability claims can come from any breed.

The most common thing I hear is "Pit bulls are good dogs if you train them properly," but it's not just pit bulls, German shepherds or any other breed of dog. Every dog can be trained to become kind or even aggressive. All breeds of dogs were created to give love and loyalty and bring joy and happiness into our lives. By witholding insurance, companies force families to either give up their pet or not get one in the first place, which is truly sad. My dream is to rescue as many pit bulls as I can. I love the breed, but ridiculous insurance companies crush these dreams and may as well be euthanizing these unfairly judged animals themselves.

Amazing fact: Sergeant Stubby, the first-ever dog to receive medals and be promoted for his service in the military during World War II, was a pit bull. Not only was he shot two times, but he also warned soldiers of an oncoming gas attack, saving all of them. He met three U.S. presidents and became a national treasure. How about Teddy Roosevelt's pit bulls? He was one of the first breeders too. Even Helen Keller had a pit bull that helped her with everyday tasks in life. Last but not least, there's Petey from The Little Rascals. Who could forget that adorable mug and how well he got along with children? It seems as if insurance companies and people all over have forgotten what a lovable and compatible breed the pit bull is.

Just be sure to keep in mind that when you take home that puppy or adult dog, they expect to be with you for the remainder of their days. Don't give insurance companies that have breed-discrimination policies any of your business. Let's hurt them where it counts: their wallets. Instead, give your business to those that support breed equality. 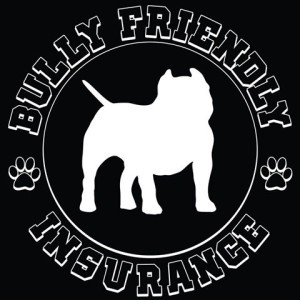