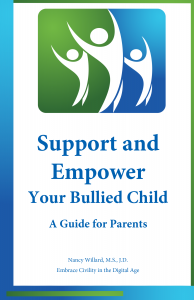 Bullying is a little like the weather. Everyone complains but no one does anything about it. Well, that's not entirely true. Some adults try to stop or prevent bullying but, too often, they wind up failing or making things worse.

That's one of several important take-ways from Support and Empower Your Bullied Child: A Guide For Parents, a short (46 pages) but extremely useful eBook by Nancy Willard.

Willard, who runs the website EmbraceCivility.org, is a pioneer in the field of cyberbullying prevention. But, as she points out in the book, cyberbullying is less a specific form of bullying and more "a term that has been applied to a wide range of hurtful acts," including all of the other forms of bullying she describes: discriminatory harassment, sexual harassment, disrespect or denigration, relational aggression, conflict or "drama," physical harm or threat, dating abuse, retaliation, hazing, and accidental bullying such as jokes gone bad. Cyberbullying can also include distributing nude (sexting) images and, as she points out, "Digital technologies have characteristics that can be an advantage or disadvantage." A digital record that sticks around for a long time can cause long term hurt, but it can also provide evidence for helping to deal with the problem. And the fact that it can be seen by a wide audience, "can increase the sense of vulnerability of the one targeted or alert helpful allies and generate help."

I hope you're getting the sense that Willard understand the nuances of bullying. She understands that the motives of those involved are diverse and complex and that the response from adults needs to be thoughtful and not knee-jerk. She also warns that well-meaning adults can sometimes make things worse.

The book is aimed at parents who want to take a role as an advocate in helping their child deal with a bullying issue. And the word "advocate" was chosen carefully. As parents, it's our job to advocate for our children and sometimes it takes more than just a nudge to get what our children need from schools, agencies and other authorities that affect their lives. Willard also suggests that parents of children who are bullied can also engage in advocacy on behalf of all of the students in the school--to help the school community make the necessary changes to support their child as well as others.

I won't give way the whole book but an excerpt from the introduction will give you a feel for the way Willard worries that school personnel - despite their best intentions - can sometimes get it wrong when confronting a bullying issue.

Teachers who bully & why that resonates with me

In most cases, school staff really do try to support students, but Willard does acknowledge cases where adults, including teachers and other staff, can themselves bully or harass students. Adult-on-child bullying is one of the least spoken about aspects of the problem, but I know from experience that it can be devastating, I was bullied for years by a gym teacher who -- sadly -- taught at both my middle school and high school. As an overweight and not-too-athletic child, I was ridiculed and harassed by this teacher for years. As an adult, I lost the weight and got in shape but I could never "lose" the memory of what he did to me such as following me around the track and hitting my butt with the braided chain attached to his whistle. I knew about bullying back then but it never occurred to me to apply the term to the way this teacher was treating me. 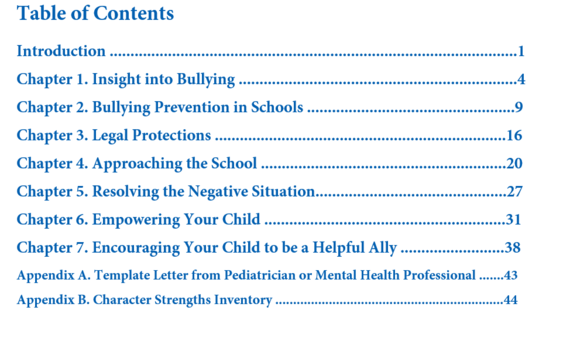 One of my favorite chapters explains how to "empower your child in gain greater self-confidence and resilience in the face of aggression, from peers or adults." In other words, even though parents and authorities have roles to play, often the children themselves are the best advocates. Based on research, which she (thankfully) cites, Willard concludes that "Students who are bullied, but who have supportive friends, experience less distress." Sometimes peer support can be more meaningful than parental support but parents can play a role in embracing and empowering that peer support.

Not all youth are at equal risk for bullying nor do all youth who are bullied respond in similar ways.

"The profile of students who are bullied is that of students who are 'diﬀerent' in some way, such as having disabilities, perceived to have a diﬀerent sexual orientation or identity, being obese, and, in some areas, racial or religious minorities." While differences can be celebrated, too often, being different, says Willard, is perceived as "deviant." But, she adds, "The social norms of a school community, as modeled by staﬀ and student leaders, plays a key role in determining the extent to which some students are considered 'deviant.'

Why buy the book

There are three reasons why you should buy this book: