One of the great questions of our time has been answered. The Honest Toddler, who had been anonymous until this week, is, in fact, the creation of a mom. Like Oz, the Great and Powerful, she has stepped out from behind the curtain and revealed her true identity. Just look on the cover of her forthcoming book, “The Honest Toddler: A Child’s Guide to Parenting,” and you’ll see, in small print:

“Written under the supervision of Bunmi Laditan.”

So, who is Bunmi Laditan? At HuffPost Parents, we've long had our suspicions about the mysterious person channeling our favorite virtual tot -- someone who has managed to attract almost 200,000 Twitter followers, 90,000 Facebook fans, run a popular website and score a book deal. (The routine in our newsroom when a new HT tweet pops up goes like this: synchronized laughter, followed by knowing looks and one editor saying out loud, “Honest Toddler?") Most of the team suspected that a mom brought “him” into our lives, though in a couple of instances, we debated whether it was a dad or a highly astute child-free comedian. In the end, we decided the toddler was based on one very funny woman's own child, probably her only kid.

Laditan, as it turns out, is a mom who was right under our noses, having blogged for The Huffington Post since October 2010 and written about parenting for websites including Mothering and iVillage.ca. 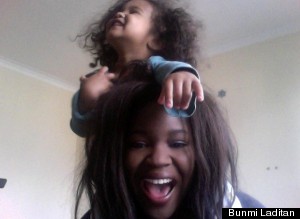 Yes, sorry, Americans, the genius comes from Canada -- Laditan lives with her family just outside Montreal. In addition to playing HT on the Internet, she works as a social media consultant for family brands and told HuffPost it has been a bit awkward answering colleagues who recommend that she "interact with @HonestToddler."

Perhaps most shocking to our team is that HT is based on Laditan’s younger child, a daughter (!), who is now 3 years old. When asked why the photo on HT’s Twitter profile looks like a boy, Laditan said, “The photo is boy-ish, but only because it was the only one that I could find at the time.”

Of course, we had about a million and two other questions for this grown-up who speaks toddler so fluently. Over e-mail, Laditan provided insight into how she balances parenting with being a child on Twitter, her the plan for HT after her daughter grows out of toddlerhood and what really breaks her heart about churros.

HPP: What gave you the idea to tweet as a toddler?

BL: I started the Twitter account in May 2012 during a challenging time with my then-2-year-old. She was in full defiant, crazy, wild, toddler mode, and I was taking care of her while working from home. It was absolute madness. One afternoon when I was at the end of my rope, I looked at her sweet but decidedly "Come at me, bro" face and for some reason our situation just seemed funny. I realized that just as I was frustrated, she probably was, too.

I began to wonder what she would say to me if she had the ability to fully articulate herself and started the Twitter account as a cathartic release. It was purely just for fun and my own personal entertainment. I was literally tweeting to myself for a while. I didn't think anyone would notice or care. I just needed to find the humor in the midst of toddler craziness. It was either that or start hitting the bottle. Hard.

HPP: HT is based on a girl! Is the character a boy though?

BL: The character is asexual. I've never mentioned sex because I wanted to focus on the universal toddler experience.

I could say "I'm done eating" but pushing my plate to the floor is how I live my truth.

HPP: Your identity has been such a well-kept secret? Was it tough to preserve anonymity?

BL: I did tell a few friends in passing, but it wasn't something that came up in casual conversation. Later on, I deliberately decided to stay anonymous because it wasn't about me; it was more about the voice and the entertainment. I felt like injecting myself into it would take away from the fun. The only reason people know that I'm behind it now is because my name needed to be on the book cover.

HPP: How true to life are HT's tweets?

BL: The tweets are extremely true to life. Obviously, when I make pop culture references to "sizzurp" or go on long rants about scones, they don't come out of my toddler's mouth, but for the most part, parenting a toddler is all the inspiration I need. I've had moments of panic where I think, "I'm all out of ideas," but it only takes a few minutes of bath-time wrangling or another meal rejection for me to be right back at it.

BL: The hardest part for me is remembering the ideas that pop up during the day. Trying to tweet and parent at the same time is next to impossible and usually results in something like a 50-count box of tampons being unwrapped. In the time I've answered these questions, my youngest has managed to dip her hand in a jar of maple syrup. Fully submerge it. I now carry a notepad around for blog/tweet ideas.

HPP: Does running the HT site and feed make it easier to handle when your daughter acts up because you know you're getting good material?

BL: Not at all. In those moments of mental exhaustion, I'm just trying to control the heart palpitations. If we're talking public tantrums, I'm thinking, "We need to get out of here before someone puts this on YouTube."

HPP: And has that happened recently?

BL: Today. Over not being able to hold my iPhone after she intentionally threw it whilst in the drugstore. In her defense, she is cranky (ear infection). I can never remember what tantrums are about. They're always a haze of enabling deadweight and me picking up her limp, angry body trying not to make eye contact with the strangers who are undoubtedly watching us.

HPP: What have you learned about parenting by channeling a rambunctious tell-it-like-it-is toddler?

BL: The greatest lesson that I've learned about parenting from watching my toddlers grow has been to not be afraid to be joyful -- that it's perfectly fine to react to life as it happens rather than wasting it in a state of tense anticipation. The second greatest lesson has been that there's nothing wrong with naked.

When you love someone, you accept them as they are. Pants or no pants.

HPP: How long do you plan to keep it all going? What happens when your daughter is out of toddlerhood?

BL: I plan to keep it going as long as it's fun. We have plans for more children so I'll have toddlers around for awhile ... just for material, of course.

HPP: Is there anything you wish someone would have told you about motherhood?

BL: Not that I would have listened, but I wish someone had told me to not get so wrapped up in defining my parenting style or approach to child rearing. It's very tempting to try to find a theoretical clique and get all hard-core about it. I've been in every group that would have me from Attachment Parenting to Let Them Eat Fruit Loops and have finally found that it's more important that my parenting be responsive to the particular/current needs of my kids, while not making me insane, rather than any philosophy.

HPP: What's the best part of having a toddler?

BL: The boldness by which they live their lives.

HPP: What's the worst part of having a toddler?

BL: The boldness by which they live their lives.

... wear pants? When we're outside, always (snowy winter). Inside, about 50 percent of the time.

... hang out with Grandma and Grandpa? Almost weekly.

... sleep in the Big Bed? These days, almost never. She just acquired some "Sesame Street" sheets and is pretty excited about them.

... eat churros? We live in Quebec where churros are not easy to come by. Once at year, at most. This breaks my heart.

We round up HT's best tweets every month. Click through the gallery below to see all of our favorites and be sure to follow @HonestToddler and @HuffPostParents on Twitter!