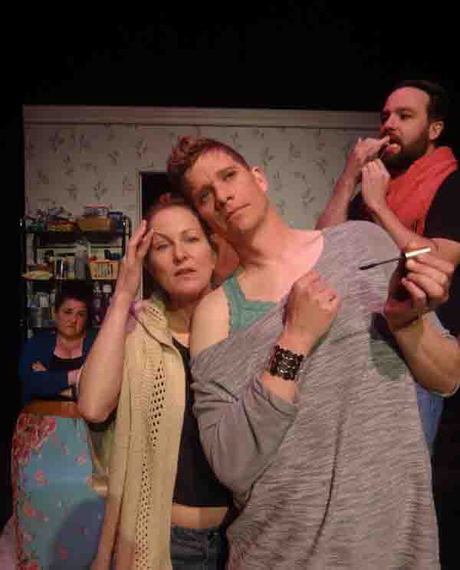 A gorgeous Saturday on Larimer Square, you'd almost think it was springtime and lucky girl that I am, I got to sit down with two of Buntport Theater Company's smarty-pants collaborators, Erin Rollman and Brian Colonna. The subject of our conversation should be their new show 10 Myths on the Proper Application of Beauty Products, but swiftly veers to mythological 80's bands, creative clusters and the beautiful Denver actress, Diana Dresser.

Joining in in this eggy-bagel-sandwich of a morning is musician/author/muse, Miriam Suzanne, whose book in a box, Riding SideSaddle inspired this current offering. Suzanne moved to Denver, identified Buntport as kindred spirits and managed to squidge her way into working with the group soon after. Her dark, indie trio, Teacup Gorilla, provided theatrical soundscape for the ReTriplicate performances, inspired by the Clyfford Still Museum Repeat/Recreate exhibition and now she's moved front and center. 10 Myths on the Proper Application of Beauty Products is the opener, adapting, supplementing and riffing on themes introduced in Suzanne's non-linear , "open source" Riding SideSaddle tale, written on 250 index cards to be read in no particular order.

Following a group of friends that resist order, category and completion, this play weaves myth and storytelling with every day rituals. It is about people deeply in love, suffering loss, celebrating strangeness, all while they pluck their eyebrows. It is about the Greek myth of Salmacis and Hermaphroditus, who are merged into "one being of both sexes" and about what we see when we look in the mirror. Oh, and the whole thing is underscored by a three-piece band standing in the bathtub.

The soul of the piece lies in the gender-blending love and acceptance that flows like water through these relationships. Sometimes narrative, other times abstract, and always metaphoric, the longing for what we miss in another brings forth the best in ourselves as we gain and lose in our most intimate moments.

After a nine-month hiatus to focus on different kinds of creative endeavors- a book on collaborative writing, among them- Buntport Theatre Company returns for their fifteenth season and three back-to-back original shows...because apparently, they missed the joys of summer stock. As a writer, I'm insanely jealous of Buntport's talents, asking about their process in hopes I could channel my inner voices into a collaborative style of my own. "It's always the same" says Rollman. "We get together for a pitch session to see who's thought of something interesting-", "And then we Google it", bumps Collona. Once a topic is chosen, they go their separate ways to research and write singularly, sending their individual offerings to Erin who edits it into a kind of first draft cohesion. "That's where we start the rehearsal where we rewrite, reshape and revise. A lot", she continues. "When it comes to casting, we start with 'anyone want to play something specific?' and fill in around that. Usually it becomes clear who should take which role." (I can't imagine this happening in many other groups.) Which brings us back to Diana Dresser... "We started working on a different piece with Di, which kind of fell apart. It's back to the morphing kind of thing our shows go through. We've always performed as ensemble so having Diana Dresser and Denver actor, Michael Morgan joining us in 10 Myths is a great and different kind of stretch for us. I'm sure our way of working's been a bit different for them, too."

10 Myths on the Proper Application of Beauty Products is the first full-length show of Buntport's 15th Season, followed by a one-person-piece about a museum guard called
The Rembrandt Room, where Erin Rollman goes solo. The ensemble comes together again for the third installment, Greetings from Camp Katabasis, an epic exploration of descent and ResussAnnie. Don't ask, just get your tickets. Because when Buntport Googles, people listen.