The Hmong villagers of Chiang Mai Province in Thailand eat a well-balanced diet. They raise pigs and other livestock, grow cabbage, tomatoes and corn. A typical meal might consist of rice with spicy minced pork sauce and soft-boiled vegetables. Unlike the vast majority of meat production in the United States, their animals are not genetically cloned and raised in pens at the expense of the animal's health and, arguably, the consumer's, but pastured outdoors on a healthy, natural diet.

So, "what happens if you take remote Chiang Mai villagers who've never seen a burger, who don't even have a word for 'burger' and ask them to compare Whopper versus Big Mac in the world's purest taste test?" the new campaign from Burger King asks.

Well, for one thing, vomiting, diarrhea, and with extended use, Type 2 diabetes, obesity and vitamin deficiency (i.e. the impact of the American diet on Greece). But most of all, you get a classic story of American corporate colonialism, sickly masked in that all-too-proud illusion of goodwill. 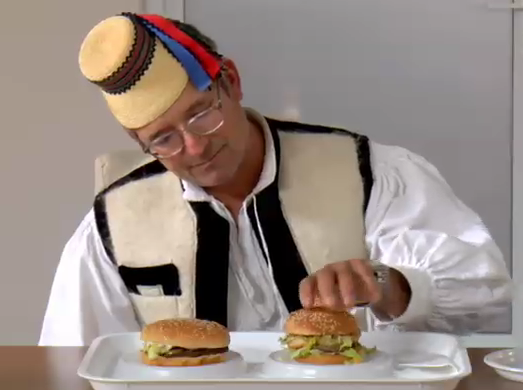 It's hard to tell who's more clueless when watching the behind-the-scenes footage of the ad campaign currently on the Whopper Virgins website (yes, that's their website): the peasants, who pick up parts of the burger in disconcerted quandary, or the producers, who ham themselves up as rugged pioneers, going out to discover "typically very difficult people to find" and thrusting burgers before their innocent eyes. The producers - or whoever they are - on screen set the tone for the pseudo-serious docu-mercial, talking with self-satisfaction about the project as some kind of neat cultural exchange (of course, Whoppers beat out Big Macs in the end). Oh, we get to see the nitty gritty: the burgers must be purchased from a franchise within fifteen minutes of reaching its taste-tester, so an SUV tosses up gravel in one shot as a PA simultaneously bursts out the door running with two paper bags - talk about fast food.

It's no wonder that many of the indigenous people offered "no preference" between the two sandwiches. Almost nothing in the Whopper and Big Mac resembles natural, unprocessed food save for the sad strips of lettuce and pale tomato. Least of all not the square of yellow cheese, which cannot even be called cheese according to the US Code of Federal Regulations, but rather "pasteurized process cheese food." It's doubtful the beef patty is recognized as meat at first glimpse, with its grayish hue, floppy, flat shape and enough preservatives to keep it intact for decades.

Aside from the familiar face of cultural bullying the campaign exposes, and the further exoticisation and exploitation of indigenous peoples from around the world - topics which can and will be argued about 'til the cows come home - the Burger King Whopper Virgins commercials exemplify two very disparate ways of looking at food. On the one hand, heavily processed, genetically modified, fast and far from homemade. On the other - and there is one scene in the docu-mercial of native foods being scooped up and the American producers enjoying plates full of it - grown, raised and cooked with knowing care by the village that consumes the food itself. Fast, versus slow.

In the very final scene, a producer asks an Inuit what he thought of the burger. After replying that it was "very good," the producer persists, "How does that compare to seal?" No deal. The Inuit replies: "I like seal better."