A man shoved a woman's head into a Burger King toilet before dragging her out of the restaurant by her hair and driving off with her in a car driven by a second man.

Now the police of Pembroke Pines, Fla., believe the woman may be in danger, and are asking the public's help in locating her and the two suspects, CBS Miami reported.

A press release from department states that the woman walked into the bathroom of a Burger King at 8913 Taft St in Pembroke Pines, and was followed by a man identified as "Suspect 1." A witness in the bathroom saw Suspect 1 pushing the woman's head into the toilet. The witness then told both people to leave. 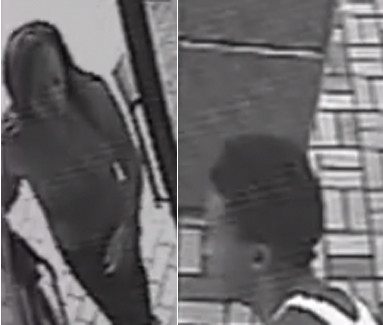 Police are searching for the victim (left) and two suspects, one of whom appears at right.

Suspect 1 was then caught on surveillance video (above) pulling the woman out of the establishment by her hair.

A car, driven by someone identified as "Suspect 2," pulled up and Suspect 1 stated, "You're going to die today and I'm going to be the one to do it," before forcing the woman in to the vehicle. The car drove off, heading south.

The victim is described as a black woman in her 20s, 140 to 145 pounds, 5-feet-5-inches to 5-feet-7-inches tall with shoulder-length black hair, and wearing a purple shirt when the incident occurred.

Suspect 1 is a black male in his 20s, 6 feet tall with a slim build and black hair, who was wearing a white tank top.

Suspect 2 is a white or Hispanic male with dark curly hair. The car was a silver Infinity G35, 2009-2011 model with a University of Miami sticker on the back window