The burger boom rolls on. The number of independent burger restaurants continues to increase a rate faster than those for chain burger units, all quick-service or the total restaurant industry

According to The NPD Group's just-released Recount survey, a census of restaurants open as of Sept. 30, 2013, the total number of U.S. restaurants of all types increased by just 0.7 percent to 633,043 in the past year. That matches the 0.7 percent growth for the previous year. Chain restaurants, which account for 44.5 percent of all foodservice units, increased in number by 1 percent while the number of independents was essentially flat compared with 2012 at 351,430.

However, the number of quick-service burger restaurants increased by 1.2 percent thanks to the continuing surge in non-chain brands (1 to 2 locations). The number of independent (non-chain) burger joints increased by 7.2 percent (to 6,187) for the 12 months ending September 30. This year's increase is more than twice the 2.9 percent growth indie burgers achieved the previous year. 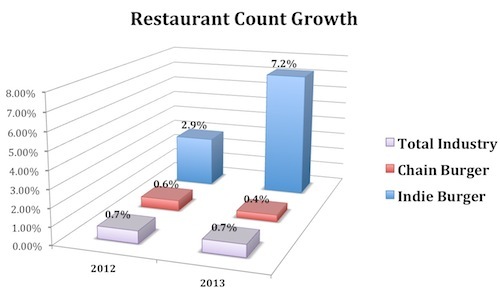 Chain burger units increased in number 0.4 percent in the past year and have grown at less than 1 percent in each of the last three years. But with 44,981 locations, burger chain units greatly outnumber the independents.

The fast-casual category (any menu type) continues to grow, although not as fast as indie burger joints. For the year, fast casual added 902 locations (totaling 16,215) for a 6 percent increase. The number of quick-service restaurants of all menu types increased 2 percent to 333,970.

Americans made 61 billion restaurant visits in the past year but that was essentially unchanged from the previous year. Said Greg Starzynski, NPD Foodservice director of product management, "The restaurant recovery continues to move slowly and as a result operators are taking a cautious approach to expansion. This conservative approach to restaurant unit expansion will continue into the foreseeable future."