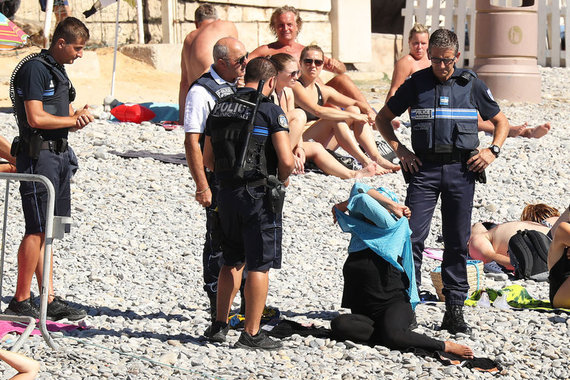 What does a Burkini ban have to do with a forthcoming global conference on World's Religions After September 11, which meets in Montreal at the Palais des congress on September 15, 2016 ?

The answer is: "Everything," strange as it might sound.

A meme which has just gone viral shows French policemen ordering an elderly Muslim lady to take off her tunic on a beach in Cannes. The 'victim' is a third-generation French citizen who says tearfully as she complies: "Because people from my religion have killed, I no longer have the right to the beach". As a matter of fact she does have right to the beach, what she does not have, as of now, is the right to wear a Burkini on the beach, a bathing suit recently designed to enable Muslim women to engage in sports and outdoor activity in a way consistent with Muslim norms of modesty. Apparently whatever she was wearing qualified as a Burkini and provoked such comments as: 'Go back to where you are from', 'Madam, the law is the law, we are fed up with this fuss', and 'We are Catholics here'. It is further reported that when her female relatives asked the police why it was not going after people wearing signs of religious affiliation in public, such as the cross, a policeman responded: "We are not going to hunt for crosses. Get going, madame. You are being told to leave the beach".

Many on twitter felt that the situation that the meme captured indicates how French enthusiasm for enforcing secularism in public seems to have gone too far.

In a broader perspective, these developments point to something profoundly disturbing--that fanaticism is not merely a religious phenomenon but can also be secular in nature, and that fundamentalism can also rear its head not just in a religious context but also in a secular one. And further: that inasmuch as the rise of secular fundamentalism in France is in response to acts of religious fundamentalism, not only do we have to contend with not just one form of fundamentalism but two, these two can also potentially engage each other in an ascending dialectic with unpredictable consequences.

The enormity of the issue which the meme captures comes in sight when we view things in an even broader perspective and realize that the second world war was preceded by a rise in secular fundamentalism, represented by communism, totalitarianism, and fascism. The nations of the world came together to formulate a Universal Declaration of Human Rights in 1948, after these forces had run their vicious course.

Should the religions of the world not come together and formulate their own declaration of human rights, before the forces of religious fundamentalism get out of hand?

It is the goal of this conference to accomplish precisely this; to release a Universal Declaration of Human Rights by the World's Religions Article 19 of this declaration runs as follows:

Everybody has the right to freedom of opinion and expression....The term : expression includes not only the language one speaks, but also the food one eats and the clothes one wears.