They say that the strongest art comes from freedom. Now that Aung San Suu Kji has won her parliamentary seat, real artistic freedom seems to become a reality for Burmese artists. 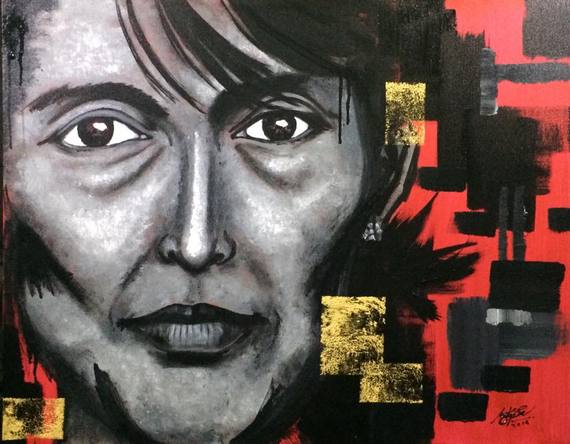 Burmese artists lived under strict laws of censorship since 1964. Through their artworks they battled for freedom and it's only since 2012 that censorship was abolished. Since then there was an explosion of political art but artists stayed very careful in their choice of subject.

Walking through the streets of Yangon, Myanmar's largest city, you could feel an air of silenced excitement. The first free elections in 25 years were only a month away and artist Khin Maung Zaw took me to his home and gallery. The idyllic paintings of Buddhist monks and Burmese landscapes on the wall express the love he feels for his country but "Myanmar is a shattered country. We need to choose democracy. It's the only way we can talk about our needs.", says a soft-spoken Zaw. Still, he doesn't call his work revolutionary: "my works are snapshots of the daily lives of Burmese people."

New Zealander Gill Pattisson, owner of River gallery in Yangon, thinks that artists play different roles. "On one level you have people like Mr. Khin who are the creators of beautiful artworks which depict their country and the fondness they feel for the landscapes, people, and religious icons all around. At another level, some artists have been in the forefront of dissent, using their art as a form of protest. Artists in the latter category had to be very careful in the days of censorship, and in general it was only in performance art behind closed doors with invited audiences that one could see work that was provocative or critical of the regime."

Aung Kyi Soe is one of those protest-artists. He focuses on political issues and wants to share his thoughts with the people. In his gallery it becomes clear that he is a strong supporter of Aung San Suu Kyi and her National League for Democracy party (NLD) . Mr. Aung Kyi Soe's apartment is filled with portraits of the Nobel peace prize winner. "Our lady can set us free and NLD will win," he smiles convincingly. Min Lwin, owner of Gallery Sixty Five in Yangon, agrees: "If it's a free and fair election NLD will have a landslide victory, no doubt about that." Contrary to Mr. Aung, Min tempers high hopes: "Even if NLD wins, nothing is going to improve right away. I think a lot of people, certainly the protest-artists, are expecting Aung San Suu Kyi to do magical wonders. She is a cult figure and that could become a problem."

While for artists the Nobel peace prize winner stays a rock star and source of inspiration for their artwork, a lot of ordinary people in Myanmar don't know how to express their feelings and expectations according to Khaing Thazin Htet, a young female painter based in Yangon. "Artists can be the voice of the Burmese people. They can inject the government's mind-set through their art. It's a peaceful way of negotiating. In that way artists are political activists." Gallery owner Gill Pattisson doesn't agree. "I don't believe that! Most Burmese artists have such a long habit of self-censorship so it's hard to be a political activist at the same time."

Min Lwin, owner of Gallery 65, thinks that things are more complex: "If you are an artist you are easy looked at as against the government or as counter-cultural. Still the reality is that the majority of the Burmese artist community is indeed in the opposition camp but that doesn't mean that their artwork is necessarily political."

He specifies: "The first two years after the censorship artists were doing a lot of political art that was not allowed before but now interest has diminished. What's allowed, isn't that interesting anymore. Personally I think art was more exciting before censorship because artists were clever in the way they were creating art. Political art wasn't so blatant and direct."

Gill Pattisson agrees but thinks that the strict laws of censorship of the military junta still hold a strong grip on the psyche and work of Burmese artists. "I think artists in Myanmar now have plenty of freedom, and we are seeing an evolution and blossoming of artistic expression. I am hopeful that ever more artists will subject themselves to the currents of the international art world and also feel free to express themselves in ways forbidden to them in the past but you can't break the habit of self-censorship in one day.", Gill says with a smile.

The hope and dream of artists Khin Maung Zaw, Aung Kyi Soe and Khaing Thazin Htet that the elections would bring them more freedom seems to be fulfilled with the victory of the NLD. Still, gallery owner Min Lwin stays sceptical: "To live and especially to work in this country you have to be very optimistic because I've seen a lot of cycles towards democracy. Aung San Suu Kyi is very good at being the opposition but can she lead? Sometimes I think a victory of NLD will just be the lesser of two evils."

But in the end it's the art itself and not the Burmese political context that is the most important for the artists and the gallery owners. "Ultimately it's the fact that you are in touch with your art so you can be in touch with your own culture.", Min Lwin concludes.