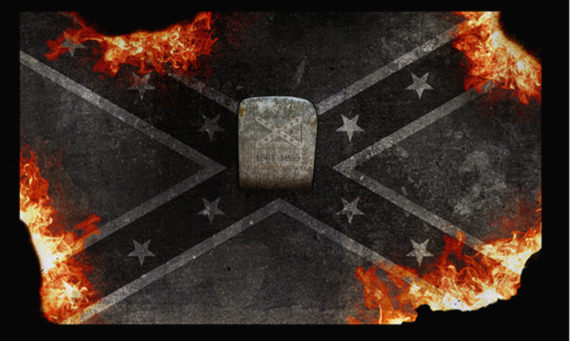 In honor of the 150th anniversary of the end of the Civil War, I organized a 13-state funeral for the Confederate flag on March 25, 2015--three weeks before the Emanuel A.M.E. Church shootings in Charleston, South Carolina. This in turn led to my call to burn and bury the Confederate flag in all 50 states on the following 4th of July. Both of these actions were very successful, with widespread participation and media coverage across the country, from Alaska to Florida, due to an incredible team of activists, artists, and poets. It was great to see so many Americans of different backgrounds confronting this divisive symbol with a powerful statement of creative resistance. This art project produced several things: a contribution to a national discussion, a group eulogy poem, the Burn and Bury music video, and a free digital kit that included an 8½" by 11" printable Confederate flag for folks who would not buy or could not find a Confederate flag. But most importantly, it helped identify a community of folks who understood the intersection of culture, art, and activism as it related to the Confederate flag, white supremacy, and the complexity of Southern heritage.

However, the Confederate flag continues to fly across America, even after the Civil War ended 150 years ago, even after the Charleston massacre on June 17, 2015, and even after my 13 Flag Funeral installation, showing that history, mass murder, and art are not enough to get past the deep national wounds that have divided this country along the lines of race, culture, and geography. But perhaps these wounds are permanent, the price for building a country on a complicated mixture of both virtuous and immoral grounds: religious freedom and slave labor.

After the Charleston Nine tragedy, some will claim that progress has been made: the flag coming down in South Carolina, the city motion to remove a Confederate memorial in New Orleans, or the most recent House of Representatives vote to bar the Confederate flag from being flown at cemeteries operated by the Department of Veterans Affairs. These are rather small developments, considering that nine people had to be murdered in order to induce a national conversation about something that should have been resolved in 1865. This measured progress is counterbalanced by the recent Mississippi vote to keep their state flag (which has a Confederate flag in its design), the lack of federal legislation that could swiftly resolve this issue, record high sales of Confederate flags, and a strong movement to keep the Confederate flag and its whitewashed history alive. This can be seen with the seven state governments which have designated April as Confederate History Month: Alabama, Florida, Georgia, Louisiana, Mississippi, Texas, and Virginia. The Civil War continues on so many levels with a visual terrorism/white supremacy protest on one side and the loss of white privilege protest on the other.

While I don't expect this flag to disappear anytime soon, it must be divorced from taxpayer funding and all government buildings, branding, and support--with the exception of art museums and educational or historical spaces. After all, the secessionist Confederacy and its flag were created to defend Southern states' rights to protect an economy and culture based on slavery. We are beyond the sitcom debates, academic conversations, barbershop banter, and disconnected art spaces. It is time to move beyond the Civil War, the Confederate flag, and limited views of Southern heritage. It is time to face American history directly, intellectually, emotionally, and truthfully so that a real healing process can begin. And if social change is to come, then it is time for some political intervention, federal legislation, and democratic weigh-in.

While politics and art can be very important agents of social change, it is the space where art and politics become ritual, where values and responsibilities are repeatedly shaped, reinforced, and sometimes transformed into a formidable collective consciousness for healing and inspiration. And when ritual, as a dynamic social system, goes beyond a one-time event, goes beyond the abstraction and protection of art, there is an opportunity to integrate the theme of the work into everyday life where it is needed most. From Juneteenth to Passover, we see how sacred rites of passage born out of trauma and pain can deliver a special call for purpose, social responsibility and leadership.

As an artist, I recognize the complexity and limits of art and politics to create and maintain social change. In fact, it is often critical loss, such as death or the fear of death, which motivates such discrete changes. We saw this play out with the Charleston situation. We saw this with Chaney, Goodman, and Schwerner. We saw this with Kent State. But there must be a better way other than death or silence. Change happens when individuals like Hamilton Holmes and Charlayne Hunter-Gault stand strong and lead the way. Change happens through education, cross-cultural experiences, and in the ritual space. We see these changes on the dance floor, in the concert halls and college classrooms, and even in the military. We need more cross-cultural rituals that confront the pain of the American past. And more specifically, we need an American ritual to deal with the Confederate flag.

With this in mind, I propose that we Burn and Bury the Confederate flag every Memorial Day as a way to send a powerful message to ourselves as a nation that the Civil War is over, and the days of the Confederate flag and white supremacy are numbered. And, just as we honor the memory of our lost military soldiers, we must also celebrate our soldiers of social justice who fought against slavery, those who fought for Civil Rights, and those who continue to fight against contemporary institutional and cultural white supremacy. It is time to take the Confederate flag and use it as a symbol for cathartic action, giving birth to a new ritual for all Americans to engage in: a space of healing and transformation. So with great resolve, I am proud to present BurnandBury.org, a site dedicated to organizing a nationwide Burn and Bury ritual for the Confederate flag on Memorial Day.

To learn more and get your free Burn and Bury Kit go to www.BurnandBury.org