This is a divisionary tactic. The intent is to split workers into small sub-groups so they lose strength in numbers. And it’s a diversionary tactic. The ungodly wealthy like Trump, who have taken for themselves all the economic gains from increased worker productivity, finger someone other than one-percenters as the culprit for middle-class wage stagnation and provoke workers to fight among themselves.

Division and diversion help the one percent capture government, securing policies that further enrich the rich, like trickle-down economics under which no benefits ever actually descend, bailouts for Wall Street but not Main Street and job-destroying trade deals like NAFTA and the proposed Trans-Pacific Partnership (TPP). In a real democracy, one where government serves the 99 percent, the smoldering in America would be piles of discarded TPP texts. 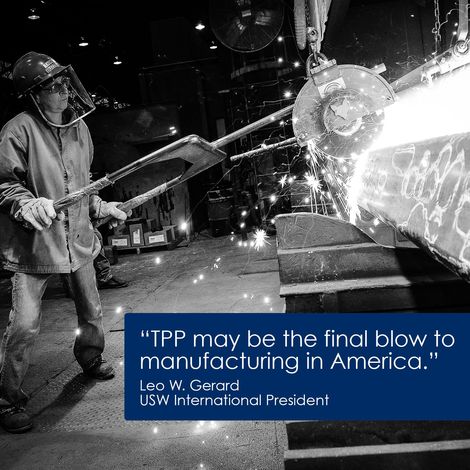 Burning it was advised last week by the Labor Advisory Committee on the TPP, a group established by Congress that includes representatives of every major labor union and labor coalition in America, among them mine, the United Steelworkers (USW). In a 120-page report, the committee detailed exactly how the proposed TPP would injure working Americans and foster the closing and off-shoring of vital American industry, such as steel, aluminum and vehicle manufacturing.

TPP negotiators should start over, the Labor Advisory Committee said. They should produce a deal that puts workers first, not corporations and the one percent.

Unlike labor groups, giant multinational corporations, especially those like Nike and Walmart that exploit slave-wage labor overseas, love the TPP proposal. They hype it using diversion. Look, the U.S. Coalition (of massive corporations) for the TPP says, here’s a map showing how much each U.S. state exports to the 11 other Pacific Rim countries in the proposed deal.

It’s classic hocus-pocus. What the map fails to show is how much each state imports from the 11 countries. And that’s the problem.

When imports exceed exports, creating a trade deficit, Americans lose jobs. That’s exactly what happened under NAFTA. That deal cost more than 845,000 U.S. workers their jobs as their factories closed or moved south of the border and consumers then bought goods manufactured in Mexico rather than in the United States.

The same thing happened after the United States agreed in 2001 to allow China into the World Trade Organization. The resulting trade deficit eliminated or displaced 3.2 million American jobs.

Every time one of these trade deals is proposed, corporations eager to replace American factory workers with long-hour, low-wage foreign laborers promise exports will rise. And often they do. But imports rise much more. And as more stuff is shipped to the United States, American factories close. American workers lose their jobs. And the American middle class shrinks.

The Labor Advisory Committee urged TPP negotiators to include strong, enforceable measures in the deal to prevent this pattern from recurring. They didn’t.

In fact, under the TPP, American workers would lose protections. For example, as it is now, the U.S. government can specify that tax dollars go to create jobs in the United States under the Buy America and Buy American programs. When the federal government builds a new highway or helps fund a sewage treatment plant, it has the right to specify that the steel and concrete be made by American workers in the United States.

The TPP would limit that. Under the TPP, American tax dollars spent on public projects could go to create jobs in Vietnam or Malaysia or Brunei. That means more American jobs lost. But look away, multinational corporations say. Don’t think about those disappearing opportunities.

The TPP also would thrust middle-class Americans into a wage race to the bottom by pitting them against foreign workers paid pennies per hour and against child and forced laborers. The TPP would, for example, allow Vietnam to do absolutely nothing for five years about violations of workers’ rights in certain areas while the country immediately receives the benefits of tariff cuts on its products exported to the United States. That would put American workers in competition with those in Vietnam earning an average of $150 a month.

But look away, stateless multinational corporations say. Don’t think about the fact that, after inflation, the vast majority of American workers’ wages have flat-lined or fallen since 1979, and the TPP would, clearly, worsen that terrible trend. Don’t worry, multinational corporations say, the TPP would require nations to establish and enforce minimum wages. Don’t think about the fact that the TPP fails to set any sort of standard, enabling a country to institute a minimum wage of 5 cents an hour. Or less.

The Labor Advisory Committee sought to protect American workers by asking the TPP negotiators to include strong measures to stop currency manipulation and to require a high percentage of a product to be manufactured within a TPP country for it to be exempt from tariffs when exported to the United States.

The negotiators did neither. That’s no surprise since they were formally advised by 500 corporate lobbyists. Instead of increasing the percentage of a product that must be manufactured in a TPP country, the deal would lower it when compared to the standards in previous trade pacts.

Rather than penalizing currency manipulation, the TPP would do nothing more than evaluate the practice that countries like Japan and Vietnam use to artificially lower the price of their products while raising the price of American-made exports.

The multinational corporations that want to manufacture in low-wage, low-environmental-protection foreign countries say: Look, there’s something about currency manipulation glommed onto the bottom of the TPP. It’s not part of the main deal, doesn’t include strong language and isn’t enforceable. But, look away. Check out that guy who speaks broken English standing on the street corner trying desperately to get work as a day laborer.

The Labor Advisory Committee wants average Americans to look directly at this bad trade scheme and the self-dealing corporations pushing it. The measure of trade success should be improving broadly shared prosperity, increasing family-supporting jobs and raising middle-class wages. Corporate profits should rise as well. But the first priority, in a democracy, should be people, not corporations.

The proposed TPP fails this test. Americans’ anger should be directed where it’s deserved. Not at Muslims or Hispanics. But at any politician who would vote to approve this proposal to further lower their wages, destroy their jobs and diminish their economic opportunity.