A man might lose his foot after piles of hoarded items trapped him in his British Colombia house for several days, the Province reported.

"Boxes, electronics, and more piled almost to the ceiling" required emergency personel to use a chainsaw to extricate the 73-year old, who suffered from dehydration and lower leg injuries. The rescue took three hours.

Mounted police in Burnaby received a call Monday night from a family member who had not heard from Dave, as neighbors call him, in two days, according to Burnaby NOW. Police officers, firefighters, and emergency services responded, and were able to make "verbal contact" with Dave but could not easily reach him, as his legs were pinned.

"He was trapped underneath items -- a whole lot of them," Burnaby RCMP spokesman Cpl. Dave Reid told the Province. "There was no way he could get out himself.

Firefighters removed the front door, cleared a path with a chainsaw, and freed Dave. He was then brought to Burnaby General Hospital, where he is currently being treated. As of Thursday, Reid told Burnaby NOW, Dave was still recovering, and doctors were examining if his foot, after losing circulation for so long, would need to be amputated.

Reid told the Province that Dave's "severe hoarding" is a result of a mental illness. "It's unfortunate, really," Reid continued. "If nobody had found him, the outcome could have been tragic."

Burnaby Mayor Derek Corrigan said city officials had visited Dave two times already, but that the city works to not upset hoarders and instead tries to gradually help them.

"One person's junk is another person's treasure," Corrigan said. "We wouldn't want to take something valuable that is important to them." 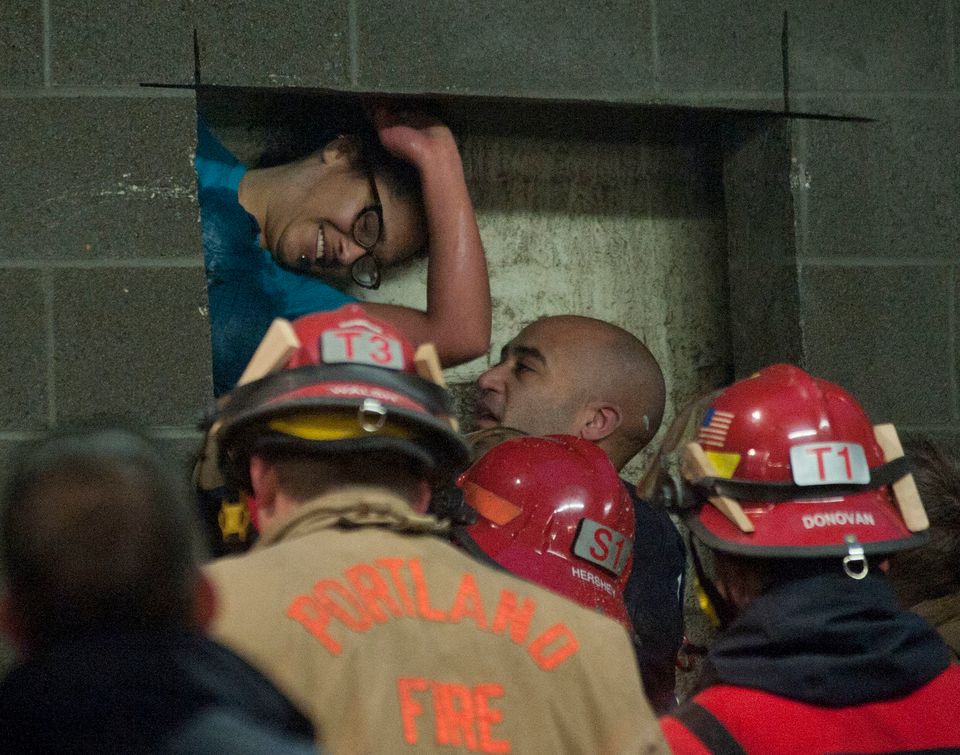 1 / 12
Firefighters rescue woman trapped in a wall
A woman is rescued from being trapped inside a wall of the parking garage at the Gretchen Kafoury Commons in SW Portland, Ore., Wednesday, Jan. 16, 2013. Portland firefighters worked for over three and a half hours cutting her free. (AP Photo/The Oregonian, Brent Wojahn)
AP