It's been nearly two years since the world's largest concentrating solar power plant, located near I-15 deep in California's Mohave Desert, celebrated its grand opening in February 2014. Since then, the Ivanpah Solar Electric Generating System -- with its capacity is 377 megawatts -- has enjoyed accolades from around the globe, including being named Plant of the Year by Power Magazine, the first time a renewable energy project has ever received that honor. With thousands of mirrors directing sunlight to the top of a tower where steam is produced to drive turbines, it's a compelling sight.

The creation of BrightSource Energy, along with investors such as NRG and Google, Ivanpah delivers enough power to PG&E and Southern California Edison to serve more than 140,000 homes in California during the peak hours, and is designed to cut carbon dioxide emissions by more than 400,000 tons per year.

So who could possibly complain? As it turns out, plenty of people. As a participant in the Department of Energy's Loan Guarantee Program to the tune of $1.6 billion, Ivanpah has drawn the attention of climate change deniers and small-government advocates who perceive it to be a boondoggle designed to rip off taxpayers and which, by the way, also kills birds. The media drumbeat got so loud that BrightSource Energy felt compelled to post a series of statements clarifying the details about its technology and financing.

The Gripe: Ivanpah is wasting government money, asking for a government grant to pay back its government loan.

The Response: Not really. The so-called grant is actually a 30 percent Investment Tax Credit (ITC) -- authorized by Congress -- for which the project is eligible. Under the terms of DOE's loan guarantee, Ivanpah is required to use those tax credit proceeds to immediately pay down the outstanding loan balance.

The Gripe: The plant isn't producing as promised.

The Response: BrightSource says it "remains confident that Ivanpah will operate successfully over its expected 30-year life." It does acknowledge that sunlight was 9 percent below projections in 2014, and that impacted its overall performance. 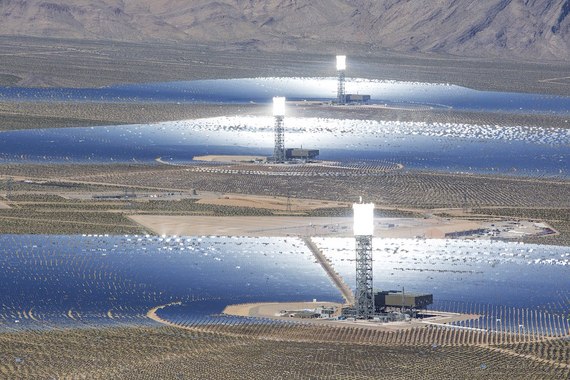 Ivanpah's mirrors spread out across a wide swath of land, focusing sunlight on power towers that heat up and produce steam to drive turbines. (Source: BrightSource Energy)

The Gripe: The plant kills birds.

The Response: It does, but not many. Birds may see Ivanpah's mirrors as water and be incinerated as they approach, but BrightSource says that after completing its first full year of monitoring, migratory bird mortality can be categorized as "low." The company also points out that billions of birds are killed each year by cats and power lines.

The Gripe: The plant needs to use natural gas, which proves it doesn't work.

The Response: "Natural gas is used to maximize renewable energy generation in accordance with state law," says BrightSource. "During the startup and commissioning process, the plant operators have increased their understanding of plant operations, including the prudent use of natural gas for safe and reliable operation of the solar receiver and steam turbine." In daily practice, the plant uses some natural gas to power up and start collecting sunlight as quickly as possible without compromising equipment.

The Bottom Line: Perhaps it would be best simply to let Ivanpah run for a couple of years and keep a close eye on its financial and scientific metrics -- and only then start passing judgment, because if it works as its supposed to, it could become an important models for others to follow in sunny regions all over the world.