Scientists have discovered a burrow in South Africa where two unlikely creatures shared a home before being entombed by a flash flood 250 million years ago.

The strange bedfellows were a beat-up young amphibian seeking shelter and a sleeping cynodont, considered a distant ancestor of mammals, researchers say.

The burrow was unearthed from what is today South Africa's Karoo Basin, which would have been part of the ancient supercontinent Gondwana at the start of the Triassic Period. Using high-energy X-rays from the European Synchrotron Radiation Facility (ESRF) in France, scientists were able to see through the lair and look at its contents without destroying it. [Wipe Out: History's Most Mysterious Extinctions]

The scans first revealed the skull of a mammal-like reptile called Thrinaxodon. As the X-ray progressed, scientists realized the animal was sharing its grave with an amphibian dubbed Broomistega. 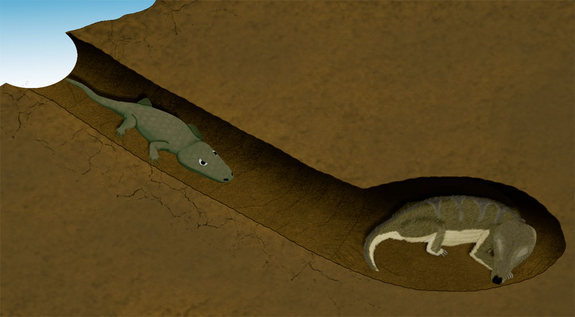 Scanning revealed an amphibian, which was suffering from broken ribs, crawled into a sleeping mammal's shelter for protection some 250 million years ago.

"While discovering the results we were amazed by the quality of the images, but the real excitement came when we discovered a second set of teeth completely different from that of the mammal-like reptile," study researcher Vincent Fernandez of Wits University, South Africa, said in a statement. "It was really something else."

The world these animals lived in was still recovering from the mass extinction at the end of the Permian era that wiped out most of life on Earth. It was a time marked by pronounced climatic warming and monsoons. To survive this hostile environment, many animals, including the ancestors of modern mammals, learned how to dig out burrows to take shelter, researchers say.

Thrinaxodon not only adapted a burrowing behavior but also went into periods of dormancy, called aestivation, which helped it survive, researchers say. Many fossils of the species have been found in a curled-up position.

"This state of torpor explains why the amphibian was not chased out of the burrow," Bruce Rubidge, another Wits University researcher, said in a statement.

As for the amphibian, the scans revealed it was a juvenile with several broken ribs that showed signs of healing, suggesting it had survived for some time after receiving a crippling injury. This animal was mostly aquatic and had no burrowing abilities of its own. Researchers think that in its handicapped state, the amphibian gingerly crawled into the burrow seeking protection without disturbing the dormant Thrinaxodon inside.

The researchers eliminated the possibility that the animals were in a predator-prey tussle at the time of death since there were no tooth-marks on the bones. The scientists also don't think it's likely that these two species would have cohabitated under normal circumstances.

"Burrow-sharing by different species exists in the modern world, but it corresponds to a specific pattern," Fernandez explained in a statement. "For example, a small visitor is not going to disturb the host. A large visitor can be accepted by the host if it provides some help, like predator vigilance. But neither of these patterns corresponds to what we have discovered in this fossilized burrow."

The peaceful coexistence of these two animals ended when a sudden flood rushed into the burrow, likely burying the creatures alive and preserving them together in the sediments for 250 million years. The small diameter of the tunnel also rules out the possibility that the Broomistegawas randomly washed into the mammal-like reptile's lair when the flood hit, the researchers say.

The research was detailed online June 21 in the journal PLOS ONE.