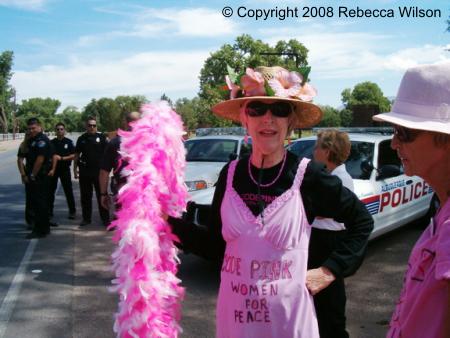 President Bush's first short journey as president was an uncomfortable one for him, and it appears he and those around him have done everything in their power -- and also a few things not within their constitutional power -- to ensure he never has to experience such humiliation again.

Immediately after being sworn in for his first term as president, Bush got into his limousine for the inaugural parade from the Capitol to the White House. This is traditionally a triumphant event, complete with cheering crowds. Some presidents even walk the route, since it is not that great a distance. But in January of 2001, the sidewalks of Pennsylvania Avenue were lined with 20,000 protesters who were angry with the outcome of the election. Even from within his speeding limo, Bush doubtlessly heard people screaming at him and saw the obscene gestures made... and he could not have failed to notice that at least one person hit his vehicle with a well-thrown egg.

Thus the "Bush bubble" was born. From this point on, protesters were to be safely shunted out of sight of Bush's motorcade, into Orwellian "free speech zones." There's only one problem with this tidy and sanitized arrangement -- that pesky First Amendment. It inconveniently guarantees Americans the right to peaceably assemble, to free speech, and to petition the government for redress of grievances. These three bedrock rights cover anyone who wants to peaceably stand on a public road and hold up a sign for the president to see -- no matter what the sign says. Outside of an outright threat ("I'm going to kill Bush," for instance), your right as a citizen to do so is absolute.

At least it's supposed to be. It should come as no surprise that the American Civil Liberties Union (ACLU) is fighting yet again to preserve this right. They've done so in two other instances which have made news during Bush's tenure. The first was the case of the "Denver Three" who were kicked out of a Bush event because of a "No More Blood For Oil" bumper sticker on their car (this case is still ongoing). The second of these cases was in West Virginia, where two people were arrested for the anti-Bush T-shirts they were wearing. In this case, the local town apologized, and the Bush administration settled the case just before it went to court by paying the plaintiffs $80,000 of our tax money -- assumably because they knew they were likely to lose the case.

Today in New Mexico, the ACLU has filed a third such case in federal court, on behalf of a number of people who were discriminated against solely for the messages on their signs. The event in question was a fundraising lunch for Senator Pete Domenici held last August, which took place in the private home of an Albuquerque suburb's mayor. The mayor's house is on an upscale dirt-lined residential street of large houses sitting on even larger semi-rural lots. The motorcade for President Bush was to approach the mayor's driveway from the north. 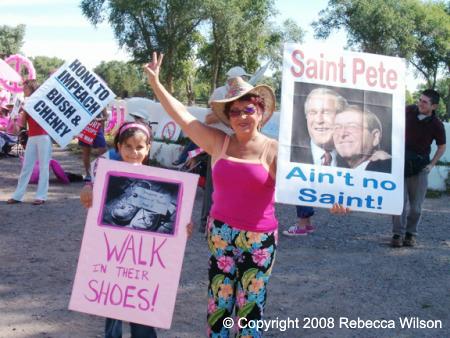 One of the plaintiffs in the case, Jeanne Pahls (co-founder of the grassroots Albuquerque organization Stop The War Machine), explained what happened next:

"I was standing slightly to the north of where the president's luncheon would be. One officer had told me that it appeared the president would be coming from the north. As the time for the arrival of the president neared, a police officer approached and told me in a rather angry way that I needed to move to the south (which was a good ways down the street, away from where I thought the president's car would be). I moved, and was surprised to see pro-Bush demonstrators a few minutes later standing not only near where I had been, but closer to the luncheon entrance than I had been standing! No one asked them to move."

According to ACLU lawyer Catherine Crump, the group which was asked to move was a "peaceful, nonthreatening group" composed of "grandmothers, children, war veterans, and school teachers." The police forced them to a spot 150 yards away (a football field and a half's distance), where they were stationed behind police cruisers and mounted policemen -- which effectively and quite conveniently blocked any possible view of the protestors from the motorcade. The group which was allowed to stay near the mayor's driveway consisted of seven children and two adults. They held up a large homemade sign which read: "God Bless George Bush! We pray for you!"

If this weren't enough to show the blatantly illegal discrimination on the part of the police, what happened next should remove all doubt. From the text of the legal complaint itself:

"Prior to the President's arrival, Alice Lloyd drove up to [plaintiffs] Ms. Wilson, Ms. Moffitt, and other individuals on Rio Grande Blvd. in a beige Chevrolet Tahoe with her 13-year old daughter. Ms. Lloyd offered some of the plaintiffs a place to stand and to hold up their signs. The place was a property belonging to Ms. Lloyd's friend, and was approximately the third property north of Mayor Abraham's estate on Rio Grande Blvd. Because the woman's property was north of the Mayor's driveway, plaintiffs would have been more visible to the President as the President's motorcade later arrived from the north side of Rio Grande. In addition, plaintiffs would not have been blocked from the President's view by the parked police cars and officers on horseback. The BCSD [Bernalillo County Sheriff's Department], however, informed Ms. Lloyd that she had to move her car immediately, and refused to allow some of the plaintiffs to go north with Ms. Lloyd to the woman's property."

This might have been written off as merely a case of overzealous local police, if it weren't already an established pattern at Bush events. Beginning with Bush's first inaugural -- for the first time -- the crowd had their belongings searched while entering the parade route. And although there was a federal court order to search everyone equally, people who were obviously protesters were searched thoroughly, while people with tickets to the bleachers were waved through with bags unsearched.

This pattern of behavior was later codified into the "Presidential Advance Manual," a White House handbook for dealing with presidential visits. In a previous court case, the ACLU obtained a heavily-redacted copy of this document (only 6 out of 103 pages were not completely blanked-out in the copy the White House was forced to provide). Crump explains, "Whatever evidence we gather about the policy helps us in all of our cases. One of the best things to come out of our previous litigation was uncovering the Presidential Advance Manual, which explains to event workers on the ground how to minimize the impact protesters are able to have and how to keep them away from the President -- and, equally important, the media." From page 34 of this manual, a section titled "Preparing For Demonstrators" helpfully explains the official Bush policy:

"There are several ways the advance person can prepare a site to minimize demonstrators. First, as always, work with the Secret Service and have them ask the local police department to designate a protest area where demonstrators can be placed, preferably not in view of the event site or motorcade route."

This is why this case, and others like it, are important. Because even though the policy is carried out by local police, they're not the ones creating the policy itself. As Crump points out, although the suit currently only names two local police departments, "We've also sued five John Doe defendants. In other cases, the orders to discriminate against protesters based on their political views have come directly from the White House. We have reason to believe that the White House may be responsible for what happened to our clients in New Mexico. But we don't know what the names of the federal officials involved are, so we've sued them as John Does for now. We will use litigation to learn their names."

The facts of the case are plain. It was a peaceful demonstration. There was no violence. Nobody was arrested. The police had no justification whatsoever for their actions. Two groups of people standing on a public street wanted to personally speak their message to the president. One group was allowed to do so. One group was not. The only difference between the two was their respective messages. This is exactly the sort of abuse the Bill of Rights was enacted to prevent.

Peter Simonson, the Executive Director of the ACLU of New Mexico, spoke of the principles involved in the case: "Law enforcement gave Bush supporters front row seats and made those who disagreed with the President stand behind a wall of cars and horses. Officials went to great lengths to shield the president from viewing the people who disagreed with him, which just isn't how a free society should operate."

Plaintiff Pahls summed it up nicely: "I don't understand why I was not allowed to stand where President Bush could see my sign, but the pro-Bush demonstrators were permitted. Do we live in a country where the police shield the president completely from any opinion that is not in agreement with his own? The events of that day suggest that this is the case."

[The ACLU has set up a convenient page on their website to cover news from all these types of cases: http://www.aclu.org/freespeech/protest/protest_president.html]

[ACLU lawyer Catherine Crump has her own article up on Huffington Post today about the case.]

Chris Weigant is a political commentator.