Burundi is at a violent crossroads. The current crisis begs the question of how the situation can be de-escalated without being exacerbated. Many look to the African Union (AU), Belgium (Burundi’s former colonial power), and a small handful of important aid donors, like the European Union, the Netherlands, and the United States, for solutions. But what have these external actors done so far? Are they capable of doing more? If so, what would be the consequences of the aforementioned actors’ increased involvement in solving the crisis?

The main tools used by the international community, namely leveraging its control over financial aid to influence the government in Bujumbura, are vital to understanding where Burundi is headed. Given that foreign assistance represents almost one-third of the Burundian economy, the consequences of removing aid are complex and potentially devastating for the African nation.

Burundi emerged from a decade of inter-ethnic violence and civil war in 2005. As part of a negotiated settlement between the warring parties, the majority Hutus and the minority Tutsis formed a joint power-sharing government, which kept peace in the country until the spring of 2015. However, violence broke out following a brutal crackdown on protests against President Pierre Nkurunziza, after his controversial announcement that he intended to run for a third term – despite the two-term limit set forth by the country’s constitution.

A period dubbed “La Crise” ensued, marked by violent confrontations between security forces and demonstrators, a failed coup d’état, a highly controversial presidential election, countless arbitrary arrests, and a large number of targeted extrajudicial killings. Government violence against protesters invoked Burundians’ fearful memories of the civil war that killed over 300,000 only ten years prior. Many Burundians, fearing the beginnings of another genocide akin to those of 1972 and 1992, have fled to neighboring countries.

Many compare the recent violence in Burundi to the chaos that plagued Rwanda from mid-1993 to early 1994 – particularly in relation to the lead up to Rwanda’s hundred-day genocide, during which an extremist Hutu government killed 800,000 Tutsis and moderate Hutus. Though there were signs of an impending genocide before it actually happened, the international community never implemented measures to prevent the mass murder. The AU, Belgium, and other aid giving nations today appear similarly unresponsive to the signs pointing to another potential genocide, only this time in Burundi.

It is worth noting that in late 2015 the AU called for a rapid military intervention via the deployment of 5,000 sub-regional troops from the Eastern African Standby Force (EASF). The AU hoped that the troops would deter the Burundian state from inflicting mass violence against its own civilians and would prevent the aggravation of an already fragile situation. While the effort was commendable, the task at hand for EASF remains far from easy and necessitates additional commitment.

The AU may not be able to intervene rapidly enough on its own, especially in the face of a hostile Burundian government. The UK Minister for Africa, James Duddridge, argued in December 2015 that the EASF is not prepared to intervene to stop the potential outbreak of civil war or widespread killing in Burundi and would need significant extra-continental assistance. Perhaps more troubling is the United Nations’ admission that it is even less prepared for the current situation in Burundi than it was for that of Rwanda in 1994. In light of these failures, one is inclined to wonder what viable recourse remains.

Beyond military means, the international community has encouraged the Nkurunziza regime and the opposition to find a peaceful resolution using two methods: targeted, individual travel and financial sanctions, and general economic aid conditionality. International donors are attempting to leverage Burundi’s dependence on aid to influence the government’s behavior. Aid dependence arises when a country’s government cannot perform core functions, such as providing basic services for its citizens, without foreign assistance, either in the form of financial support or expertise. Aid dependence (quantitatively measured in foreign aid as a part of the overall economy) is key to understanding how conditionality works. According to foreign aid sanctions specialist Gordon Crawford, “the degree of effectiveness of political conditionality will be in direct proportion to the degree of aid dependency.” Thus, it would be logical to assume that “a highly aid dependent country should be receptive to demands for change in return for assistance.” Simply put, these countries need the money and will do almost anything asked of them in order to keep the foreign aid flowing in.

Burundi’s dependence on foreign assistance increased dramatically after the end of the civil war in 2005, making the country one of the most aid dependent countries in the world. Since 2005, net official development assistance (ODA) has represented just under one-third of Burundi’s GNI and about half of its government expenditures. In 2013, annual development assistance equaled $57.41 per person —a large amount considering that Burundi’s GNI per capita was only $250 in the same year.

According to the East African, between April and November of 2015, four of Burundi’s top aid suppliers withheld approximately $190 million in economic assistance in an effort to push the Nkurunziza regime to enter into negotiations with the opposition. Belgium alone suspended more than €60 million of foreign economic aid, while the EU began to reassess its plan to give half a billion euros as development assistance. These reductions in foreign aid have left Bujumbura struggling to meet its financial obligations, with no real alternative funding available.

Major aid providers look to leverage Burundi’s dependence on assistance to bring the regime and the opposition to the negotiating table, as well as to deter the regime from committing human rights abuses. However, withholding crucial aid stands to destabilize the country. Imposing aid conditionality could push the regime toward increasingly extreme actions meant to compensate for its inability to carry out state functions.

It is also important to consider whether aid conditionality can effectively address the root cause of the violence in Burundi. Donald Rothchild, an Africa expert at the University of California, Davis, notes that “conditionality is most frequently viewed as a coercive incentive, or even a punishment (i.e. aid suspension)… with a desire to change preferences of the target state… leading to compliance with a proposed course of action.” This underscores the fact that caution is needed in using aid conditionality as punishment, lest donors further alienate the aid recipient, whose cooperation is paramount.

Donors have used aid conditionality on two separate occasions during the current Burundian crisis. The first was in mid-May, 2015, in response to the government’s violent crackdown on anti-Nkurunziza protesters. The second took place six months later, in November, 2015, when major aid providers cut assistance to the country as a way to compel the Burundian government to negotiate more seriously with the opposition and halt its human rights violations.

However, despite attempts by donors to incentivize the Burundian government to pursue policy changes by withholding foreign aid, the government has largely remained unmoved. A number of unexpected consequences, however, have arisen. First, the reductions in aid have hit the Burundian government hard, making it difficult to pay bureaucrats, police, and the army. In addition, donor aid conditionality has pushed the economy into a free-fall. In October of 2015, the World Bank predicted that Burundi’s economy would diminish by 2.3 percent, which is still far more optimistic than the International Monetary Fund’s projection of a 7.2 percent contraction.

What is at risk today is an economic meltdown largely induced by a dramatic reduction in foreign aid. We must be concerned about the real impact of aid conditionality on Burundi. As with most sanctions, there is a great deal of uncertainty about what will happen when donor assistance is withheld under such circumstances. Given Nkurunziza’s resilience in the face of economic hardship so far, it seems donors may not have the leverage that they expect. What we should fear now are the actions of desperate Burundian officials, as their house of cards collapses around them when the money runs out. While the exact impact of aid conditionality still remains unclear, the question remains: if aid conditionality does not work, what will?

This article originally appeared on Georgetown Journal of International Affairs. 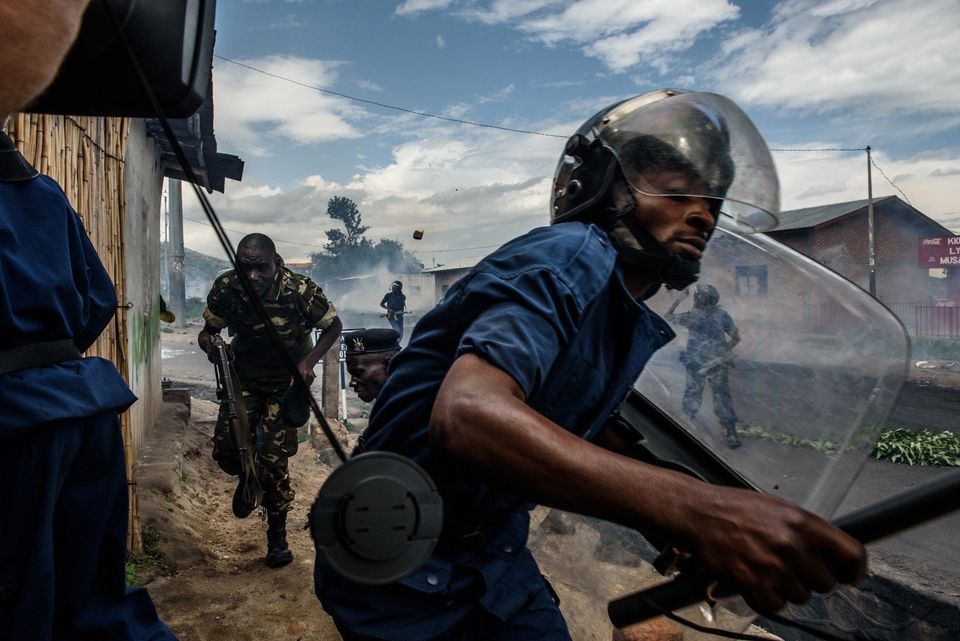