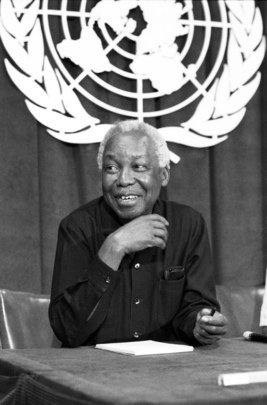 Ethnicity is a tool rather than the cause for the reappearance of discord in Burundi. The current President, contrary to a previous agreement for peace, is seeking now to go beyond the two-term limitation that was part of a long set of negotiations, which I had the opportunity to aid toward a resolution when Burundi appeared on the verge of "ethnic conflict" two decades earlier. As means to rationalize his grab for perpetual office, President Pierre Nkurunziza has reached into the bag of tricks of stoking fear of "the other." That is a zombie from the past that can rise from the dead.

During the conflict and genocide of the 1990s, representing Bosnia and Herzegovina, "BiH," (as Foreign Minister, UN Ambassador and Agent to the International Court of Justice,) I was too often asked by mediators how does one distinguish between the Serbs, Croats and Bosnians, as if some dominating physical trait would somehow explain the brutality of the conflict and presumed hate. After the end of the conflict in BiH, the tables turned, and I was asked by the former colonial liberator and President of Tanzania Julius Nyerere to assist in his mediation of the discord in Burundi. The Rwanda genocide was still a fresh reminder, and Burundi apparently faced the same predominant ethnic divide of Hutu and Tutsi. As I scanned the room of clustered political parties and other leaders, with an effort to align my experience with BiH's, I asked with an accent of humor: "How do I tell between the Hutu and Tutsi among you?"

The room overwhelmingly erupted in laughter at the complementarity of the two experiences. Quickly, some participants pointed out that it was not possible to distinguish in many cases as the physical distinctions had faded over time by intermarriage or otherwise. Further, the political movements were not exclusively defined by ethnicity. Rather, many half-embarrassingly offered that ethnicity was a rallying cry or tool to assert and garner political authority. Religious leaders, including the small Muslim community in Burundi, were also represented at the peace conference. However, rather than be the source of division among Burundi's citizens, religion in this instance appeared a more cohesive factor, largely, across ethnic lines.

A claim to be waging war or demanding absolute authority in order to defend ethnicity, religion and/or nation demands scrutiny, particularly if blood or individual rights are to be sacrificed. This is not only history but the recent past, Bosnia or Ivory Coast, or now from Myanmar, Ukraine or Syria and ISIS. While social media and the rise of global citizen awareness is a promising tool for transparency and dispelling the politics of us versus them, information technology is also being exploited to stoke intolerance, fear and hate. Perhaps though another effective tool would be to curtail the efforts of perpetual rule, as now may be the case in Burundi, or the military junta in Myanmar, or Assad in Syria, or Putin in Russia or Milorad Dodik in the Serb-dominated areas of BiH. Almost without exception, ethnic and/or religious phobia has been employed to perpetuate the current establishment and unchallenged rule.

West Africa's ECOWAS bloc has debated a presidential term limit or at least curtailing "life presidency." Unfortunately, the reform initiative has been defeated, largely due to the objection of leaders already engaged in perpetuating their rule. This adds already to the undermining of the rule of law by some African leaders who voted to make sitting heads of state immune from International Criminal Court, "ICC", prosecution, even for alleged grave violations of international humanitarian law, crimes against their own citizens or neighboring states. (The African Union as well as most democracies including the US did though effectively challenge Pierre Nkurunziza's effort to indefinitely extend his hold to power in Burundi.)

The most damaging blows to the psychology of democracy have come from once "liberators" as Robert Mugabe of Zimbabwe, claiming life presidencies and employing personality cult as well as projected internal and external threats as justification. Julius Nyerere, who fought to free Tanganyika from its colonial hold, set an alternative and more promising example. He did not engage in perpetual re-election to the Presidential post, and like Nelson Mandela after him helped mold the model of a "nation-father." Unfortunately, Julius Nyerere died suddenly from a stroke, and Africa, but also the globe, is dominated more by the example of leaders who can only see themselves as the absolute leader, rather than as a Mandela. ISIS has gone one step further by claiming that democracy is against Islam, an absurdity now structured to dig the roots for perpetual rule through nationalism and fear but also absolutism claiming divine authority, something that was the fashion a century or more earlier. Even in the politics of western democracies now, there are some politicians who claim God and patriotism as their own.

Do Not Give Credence to Ethnic/Religious Claims to Political Authority?

The United Nations, and most regional political blocs, are not designed to challenge domestic rule and perpetual rulers, as the principles of sovereignty remain a cornerstone. Some exceptions can be deduced from recent experience including Gaddafi in Libya, with mixed results. The ICC may become a more effective and transparent tool in the future, and thus efforts of some to limit its reach, but currently there is lack of consensus and credibility of how to challenge dictators and despots. However, we can stop reloading the ideological weapon most employed by those seeking perpetual rule -- do not give credence to their claims of ethnic and/or religious conflict and the cultivation of fear. (Read: "World Day for Cultural Diversity, Dialogue and Development.")

When I was representing BiH at the UN, diplomats parroting cliches and media too frequently fell into the trap of repeating tales of "age old hatreds" while centuries of coexistence and the progress of the whole of society through diversity were ignored. Sometimes this is purely intellectual and ethical laziness. The propaganda of dictators takes root as the only possible explanation for such inhuman brutality, but the effectuating of such as a weapon to build irreconcilable differences is largely ignored. This narrative is wielded by not only haters but also would be dictators, from Dodik's RS (Republika Srpska), to Burundi to Myanmar (Read: "Smuggled Rohingya Found Dead in Thai Trafficking Camp") to Syria, to Ukraine, (Read: "Construction According to Putin's Model, from Bosnia to Europe.")

Mediators, including some mandated via the UN are too quick to adopt such narratives as means to in most expedited manner promote divides as resolutions or in the least rationalize lack of success blaming presumed age-old hatreds -- see the Palestine/Israel or Northern Ireland "divide." It is the mistake that has been perpetrated upon BiH by internal actors and would-be-mediators while freezing the politics of division in place -- something that the current High Representative in BiH recently spoke about before the UN Security Council.

However, there are also examples of why confronting those that pervert patriotism and promote presumed divides can deliver real economic and political progress. Germany has become reunited and is the beacon of Europe, all within the life of a generation, that went from the rhetoric of the Nazis to the integration of a highly diverse continent, and yes, one that had a long history of wars, intolerance, absolute rulers and genocide. This model of progress is also possible again from Africa to Asia, as well as those parts of Europe where the future remains dammed-up behind walls of new and old rhetoric of division.