A long-fingered frog last seen in 1949 and feared extinct has come out of hiding in the forests of Burundi, a small country in eastern Africa, scientists reported this week.

Called the Bururi long-fingered frog (Cardioglossa cyaneospila), the amphibian is about 1.5 inches (3.8 centimeters) long, with a black and bluish-gray coloration. They knew the individual discovered was a male, because only the males of this species sport a "ring finger," one extra-long digit on each foot with spines running along it; scientists aren't sure what this lengthy digit is used for.

David Blackburn of the California Academy of Sciences and Eli Greenbaum of the University of Texas at El Paso spotted the elusive frog during a December 2011 expedition to the Bururi Forest Reserve. It was on their fifth night in the forest that Blackburn heard a frog call; they had hoped it would do so like its closest living relative in Cameroon. [Mug Shots: 10 Lost Amphibians]

"I thought I heard the call and walked toward it, then waited," Blackburn said. "In a tremendous stroke of luck, I casually moved aside some grass and the frog was just sitting there on a log."

The frogs seem to have chosen for their habitat an intriguing spot, at least for geologists, as Burundi borders the vast Congo River Basin, the Great Rift Valley (a 6,000-mile crack in the Earth's crust) and Lake Tanganyika, the world's second-largest freshwater lake.

Though the researchers aren't sure how many of the tiny frogs of this species live in the geologic haven, the multiple calls they heard suggest a good-size group. "At this point, we don't have an idea of the size of this population, though I would say that we easily heard dozens of calling males in the tiny bit of stream (only one small part of a very large forest) where we found this animal," Blackburn told LiveScience in an email.

The frog specimen now resides in the herpetology collection at the California Academy of Sciences; the researchers say they can use it for genetic studies to figure out how long C. cyaneospila and its relatives in Cameroon have been genetically isolated from each other.

Blackburn and Greenbaum have also found dozens of other amphibians in Burundi, many of which had never been identified in the country. They also discovered some "new" species that had yet to be identified.

"Because Burundi is poorly explored, we've probably doubled the number of amphibian species known from the country," Greenbaum said in a statement. "Once we demonstrate that Burundi contains rare and endemic species, we can work with the local community to make a strong case for preserving their remaining natural habitats."

From left to right, their field team consists of: Wandege Mastaki, David Blackburn, Aristote Mwenebatu, Chifundera Kusamba and Eli Greenbaum. Wandege, Aristote, and Chifundera are biologists from the Democratic Republic of Congo, and Eli Greenbaum is Blackburn's colleague and collaborator at the University of Texas at El Paso. Mastaki and Kusamba are both from the Centre de Recherche en Sciences Naturelles in Lwiro, DRC. 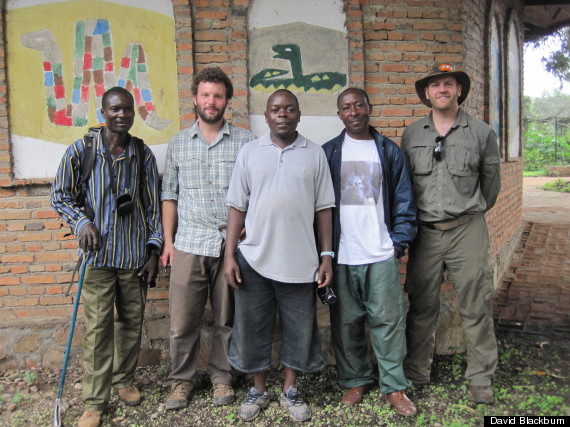