There, I said it. The opening statement in an essay or news report is known as "the lede," and in the newspaper business it is supposed to give the reader the main or primary idea of the story that follows. Dropping the main idea deep in the story or at its end is known as "burying the lede" and is used to hide the main element of the story from the reader, or to allow secondary issues to overwhelm her so that she misses the most important point when it's presented.

This is an important fact that all trans Americans need to know. They need to know it because despite the fact that nearly 50 percent already live in jurisdictions with state and local protections, the rate of employment discrimination is still very high. Local and state laws play an important role in changing culture, but they are often not promoted effectively to the business community, so change remains plodding.

The degree of discrimination is now very well documented. Thanks to studies done by the National Gay and Lesbian Task Force in association with the National Center for Transgender Equality, the Center for American Progress, the Williams Institute and, most recently, the Movement Advancement Project, we have current data that clearly show the extent of discrimination. We are very grateful to our allies for doing these labor-intensive studies, which, over recent years, have gone a long way toward convincing federal authorities and various state and local legislatures to act to protect and expand the trans workforce.

Over the past 13 years, since the turn of the century, we have had increasing success in winning victories in federal court, culminating in the EEOC decision in Macy v. Holder. That decision stated that discrimination against trans persons is to be considered sex discrimination under Title VII. It was a unanimous, bipartisan decision. All those decisions since 2000 have created a body of law that shows an unmistakable trend. That trend was recognized in 2011 by the federal judges of the 11th Circuit Court of Appeals in Atlanta, including the extremely conservative judge William Pryor, in their opinion in the case Glenn v. Brumby:

However, since the decision in Price Waterhouse, federal courts have recognized with near-total uniformity that "the approach in Holloway, Sommers, and Ulane ... has been eviscerated" by Price Waterhouse's holding that "Title VII's reference to 'sex' encompasses both the biological differences between men and women, and gender discrimination, that is, discrimination based on a failure to conform to stereotypical gender norms" [emphasis mine].

So the history of federal court decisions based on a pre-Price Waterhouse understanding of sex discrimination and sex stereotypes -- cases from 1975, 1977, 1982 and 1984 -- has been "eviscerated." Accordingly, continuing to act like victims, to fear failure around every bend and every courthouse, is a form of surrender and unilateral disarmament that is belied by the facts. It is no longer the 20th century.

Last week my friend and colleague Mara Keisling of the National Center for Transgender Equality published a HuffPost blog post entitled "The Cost of Trans Job Discrimination." In it she highlighted "A Broken Bargain for Transgender Workers," the latest white paper on transgender employment discrimination from the Movement Advancement Project. She very effectively outlined the barriers to equal treatment and the costs faced by trans Americans as a result, manifested in health disparities and high suicide rates and unemployment. As always, she has done an excellent job of laying out the case. Finally, in the penultimate paragraph, she states, "The Equal Employment Opportunity Commission (EEOC) has ruled that discrimination against people because they are transgender is illegal sex discrimination. The EEOC now takes job discrimination complaints in all 50 states." No hoopla, no recognition of its historic nature, no call at all for trans persons to claim their rights under Title VII of the 1964 Civil Rights Act.

This is called "burying the lede."

Discussions with federal employment and constitutional law experts tell me that post-Macy, Title VII now applies to all trans persons in all 50 states, the District of Columbia, and five U.S. territories. For federal employees and those who are employed in the federal contractor workspace, an EEOC decision on a claim is final and not subject to appeal. For all others the EEOC's judgment may be appealed, but as I pointed out, the trend in this century has been very positive, and the recent history of four out of four victories for trans charging parties (in the Ninth, Fourth and Eighth Circuits) is more evidence that the courts understand that anti-trans discrimination is illegal sex discrimination. As Commissioner Feldblum of the EEOC recently said regarding Cori McCreery of South Dakota, the charging party in the most recent Title VII win, "Individuals need to be treated on their merits. I am glad that EEOC staff was available to help this hard-working individual."

Most importantly, all these victories are fuel to empower trans Americans to seek and demand equal treatment in the workplace, not to cower, nor to hesitate, but to self-confidently take one's place as a free citizen with equal rights. The problem is that many trans persons don't know that they have these rights, because our gay and trans organizations have been, at best, burying the lede, and at worst, remaining silent and even misrepresenting the current legal state of affairs. Here is one of the misleading graphics from the National Center for Transgender Equality: 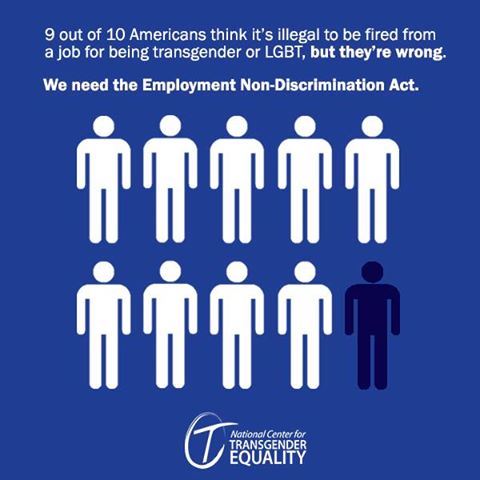 Those actions -- and often inaction and silence can be just as unhelpful as action -- have created a political state of affairs of continued fear and paralysis in the trans community. We must embrace our rights and our power and make the law work for us. Our federal government and courts have listened when we've demanded our rights, so let's go out and exercise them. Here's a graphic from California's Transgender Law Center that encourages people to do just that: 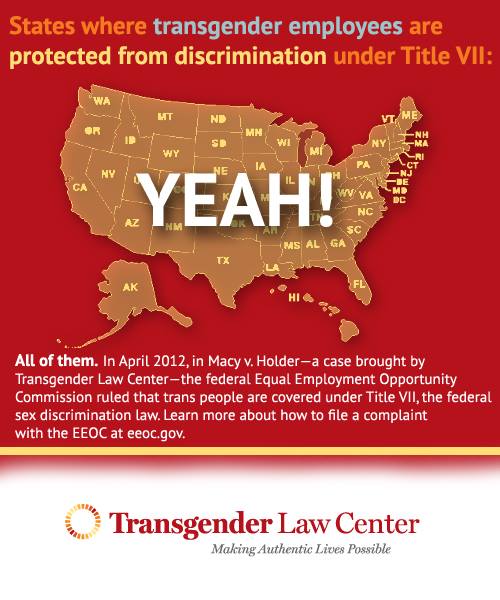