A sharp-eyed bus driver foiled a library kidnapper in the East Bay area on Friday.

A three-year-old was kidnapped from the children's section of a public library in Milpitas, California, at around 10:45 a.m.

Authorities sent out an alert: Look out for a boy wearing plaid shorts and red shoes.

Twelve miles north of the library, bus driver Tim Watson noticed a young man riding his bus with a crying boy who matched that description. To get a closer look without alarming the potential kidnapper, he said he pulled the bus over and walked through the aisle looking for a "lost backpack."

"What I'm really trying to do is to get up without him knowing to look at the little boy," he said, according to ABC7. "So sure enough, I see the plaid shorts and red shoes. That's what really stuck out in my mind."

Watson radioed police, who arrested the kidnapper as he disembarked in Fremont.

"So I open my door one slowly, giving them time to get prepped and ready to go," Wilson said. "I open up door two, the gentleman walks out calm, cool, collected as can be and they take him down on the spot." 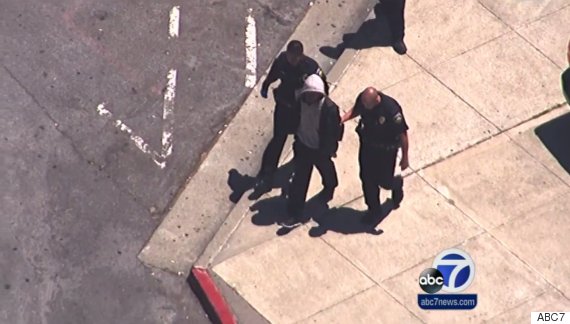 "The bus driver's a hero, an absolute hero," a police officer told reporters. The boy was reunited, unharmed, with his parents at the police station. Watson said that after the arrest, he started thinking of his own kids and broke down crying.

The kidnapper was identified as Alfonso David Edington of Pittsburg, California. Police said he had no connection to the boy's family, and they're trying to find out what he intended to do with the child.