UPDATE: We've unearthed a photo of Bush breaking his own dress code by going jacketless in the Oval Office on January 22, 2001.

**Scroll down for video**

"There should be a dress code of respect," Card tells INSIDE EDITION. "I wish that he would wear a suit coat and tie."

Card is the first member of the Bush administration to bash Obama, and he's going after him for forgoing a coat and tie.

"The Oval Office symbolizes.... the Constitution, the hopes and dreams, and I'm going to say democracy. And when you have a dress code in the Supreme Court and a dress code on the floor of the Senate, floor of the House, I think it's appropriate to have an expectation that there will be a dress code that respects the office of the President."

Card continued, "I don't criticize Obama for his appearance, I do expect him to send the message that people who are going to be in the Oval Office should treat the office with the respect that it has earned over history."

MSNBC dissected the dress code controversy on Thursday morning, and pointed to a similar fashion "faux pas" by President Clinton while in office:

Unfortunately for Card, the New York Times dredged up this picture of former CIA Director George Tenet [not of Andrew Card, as may have previously been implied]: 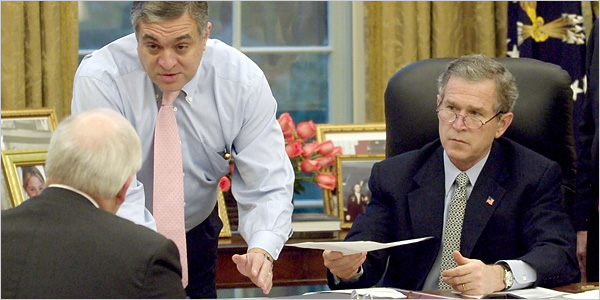