According to an e-mail just unearthed by Complete Colorado, a Bush holdover in the U.S. Drug Czar's office is fishing for information that links crime to the growing number of medical marijuana dispensaries in Colorado. 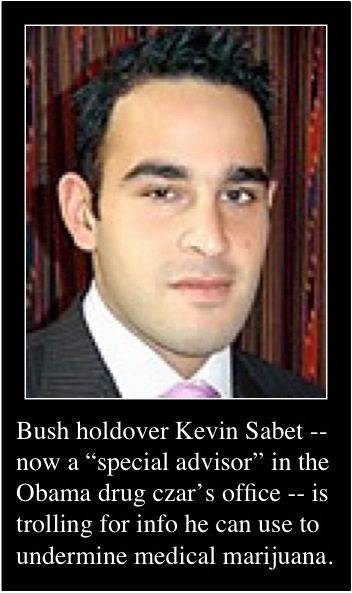 The e-mail is addressed to Colorado's chief medical officer, Ned Calonge, at the Colorado Department of Public Health and Environment, and it appears to be authored by an Office of National Drug Control Policy (ONDCP) research assistant on behalf of former Bush (and current Obama) drug warrior Kevin Sabet.

Here's an excerpt (or you can view the entire e-mail HERE):

We are looking for criminal statistics data that are directly connected to medical marijuana dispensaries, such as the number of dispensary employees or medical marijuana buyers that were arrested, fined or incarcerated for their involvement in dispensaries? The data may be for a specific state or nation wide; either would be greatly appreciated. However, since we have had some difficulty finding good data, I would just like to add that the data must be specific and verifiable. Dr. Sabet would also be interested in any information regarding the number or percentage of physicians in any state or nation wide that recommend medical marijuana.

First, why is the Drug Czar's office even asking these questions? If the Obama Administration's policy is to refrain from meddling in state medical marijuana laws and industries, why is it spending time and resources on this? Don't they have more important things to be studying at a time when budgets are being slashed due to an economic crisis? (On the subject of medical marijuana and crime (or lack thereof), a Denver Police Department memo from earlier this year found that medical marijuana dispensaries are "robbed or burglarized at a lower rate than liquor stores or even banks.")

Perhaps the more important question this e-mail raises pertains less to its content and more to its source -- Bush crony and now "special advisor" to the drug czar, Kevin Sabet.

It seems odd that the Obama Administration, which proudly declared an end to the "War on Drugs," opted to keep one of the Bush Administration's most vehement drug warriors and give him such a significant role at the ONDCP.

But since it did, it comes as little surprise that Sabet is now slumming around the Web looking for statistics he can use to make a case against medical marijuana and marijuana dispensaries. It almost appears as if he is out to start his own present-day anti-saloon league, attacking a regulated and well-established industry because it does not meet with his approval.

So, what to do about Mr. Sabet? Perhaps he should be reassigned by the drug czar's office to study something that is actually relevant. Or maybe he should part ways with the ONDCP and take his abstinence-only views elsewhere (I hear Bob Jones University is looking for a drug and alcohol counselor).

At the very least, the Obama Administration should inform him that the era of George W. Bush and his drug czar, John Walters, is over.

Mason Tvert is executive director of Safer Alternative For Enjoyable Recreation (SAFER) and coauthor of "Marijuana is Safer: So why are we driving people to drink?"