The Peru news agency Andina notes that President Bush was drinking a Peruvian cocktail during the recent APEC summit:

He noted that the flagship drink of Peru was well acepted by international guests, including Japan's Prime Minister, Taro Aso.

"Pisco Sour has been the "star" of the APEC Summit, the drink was served in several meetings at the Government Palace and the APEC Summit venue," he told CPN Radio.

U.S. President George W. Bush, who quit drinking at 40, was apparently drinking a Peruvian cocktail during a meeting on Saturday. 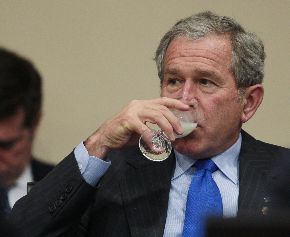