Americans want change more in 2016 than they did in 2008, but they're not sure they'll get it. Jeb Bush meets with resistance from the GOP. And the Clinton emails bother Republicans more than Democrats. This is HuffPollster for Tuesday, March 10, 2015.

AMERICANS 'CLAMORING' FOR CHANGE - Mark Murray: More Americans are clamoring for change in the upcoming 2016 presidential election than they were in the 'Hope and Change' year of 2008, according to a new NBC News/Wall Street Journal poll. That desire for change is a potential roadblock for two of the leading frontrunners - Democrat Hillary Clinton (the former first lady, presidential candidate and secretary of state) and Republican Jeb Bush (the former Florida governor whose brother and father served as president). But it might be a more significant challenge for Bush, given that fewer than half of Republican primary voters believe he would provide new ideas and a vision for the future, versus nearly three-quarters of Democrats who think the same of Clinton. In the poll, 59 percent of all voters prefer a candidate who will bring greater changes to current policies, even if he or she is less experienced and tested - up from 55 percent who said this in July 2008 during the general-election contest between Barack Obama and John McCain." [NBC News, full results] 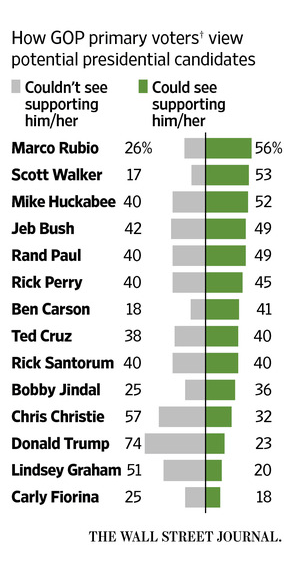 Walker, Rubio meet with less GOP resistance than Bush - Patrick O'Connor: "[F]indings [from the] new Wall Street Journal/NBC poll reinforce the view that while the Democrats’ nominating contest now looks like a foregone conclusion, provided Mrs. Clinton enters the race, the Republican contest appears to be wide open, with no clear front-runner....The survey found that 86% of likely Democratic primary voters say they are open to supporting Mrs. Clinton for the party’s nomination, and 13% said they couldn’t....Mr. Bush, an early favorite for the Republican nomination among GOP donors, faces more resistance within his party. Some 49% of people who plan to vote in GOP primaries said they could see themselves supporting Mr. Bush and 42% said they couldn’t, the survey found...The two Republicans who begin the race on the strongest footing in the poll are Florida Sen. Marco Rubio and Wisconsin Gov. Scott Walker. More than half of GOP primary voters said they were open to supporting Messrs. Rubio or Walker, compared with 49% who said so of Mr. Bush. Resistance within the party to Messrs. Rubio and Walker is far lower than for Mr. Bush: Some 26% said they couldn’t see themselves supporting Mr. Rubio, and 17% said so of the Wisconsin governor....New Jersey Gov. Chris Christie would start the race in a deep hole, the new survey found, with 57% of likely GOP primary voters saying they couldn’t see themselves supporting his candidacy, compared with the 32% who said they could." [WSJ]

GOP SEES WALKER AS CONSERVATIVE LEADER - Kathy Frankovic: "Wisconsin Governor Scott Walker may not have won the CPAC straw poll last weekend, but he stands high with most Republicans, who in this week’s Economist/YouGov poll see him as a strong leader who is ideologically 'just right.' Walker gets high marks for leadership from Republicans: nearly four times as many say he is a strong leader as say Walker is a weak one. And even non-Republicans see his leadership potential. More than half overall say he is strong leader. Put in perspective, that puts Walker slightly ahead of the current President, Barack Obama. In this week’s poll, just 50% call the President a strong leader....Part of Bush and Christie’s problem is that about a third of Republicans think those two men are not conservative enough. In contrast, a majority of Republicans view Walker’s ideology as “about right.” Few Republicans find him erring on either side of the ideological divide." [YouGov] 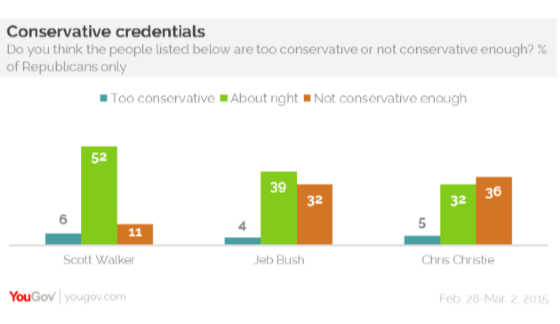 VOTERS ARE SKEPTICAL OF A DEAL WITH IRAN - Janet Hook: "Americans are very doubtful that the multinational negotiations with Iran to limit its ability to produce nuclear material will make any impact on the production of nuclear weapons...The poll found that 71% said the negotiations between Tehran and the Obama administration and other world powers will not make a real difference in preventing Iran from producing nuclear weapons; 24% said it will make a difference...The effort is facing growing criticism among Republicans in Congress. On Monday, 47 Senate Republicans warned in an open letter to Iran’s leaders that any deal between them and the White House could be nullified or changed after President Barack Obama leaves office. The negotiations also came under fire last week by Israeli Prime Minister Benjamin Netanyahu in an address to Congress." [WSJ]

PARTISAN DIVIDE OVER CLINTON EMAILS - HuffPollster: "The news that Hillary Clinton used a personal email address to conduct business as Secretary of State touched off a round of speculation last week on whether the controversy could hurt her chances in 2016….Democrats largely don't think the emails are a big deal, while Republicans generally do. Overall, 20 percent of Americans say they are following the controversy very closely, and 53 percent at least somewhat closely. Twenty-seven percent call Clinton's use of personal email a very serious problem, with 47 percent saying it's at least somewhat serious, and 42 percent that it's not very or not at all serious. Not everyone, though, puts equal weight on the story. Sixty-seven percent of Republicans say the issue is at least somewhat serious, and 52 percent who've paid some attention to the story say the media isn't making as big a deal of the story as it should...And among Democrats, there's little sign so far that the controversy will seriously harm Clinton's standing. Just 17 percent call it a very serious problem, and even the majority of that group believes it's likely she'll win her party's nomination if she runs. " [HuffPost] 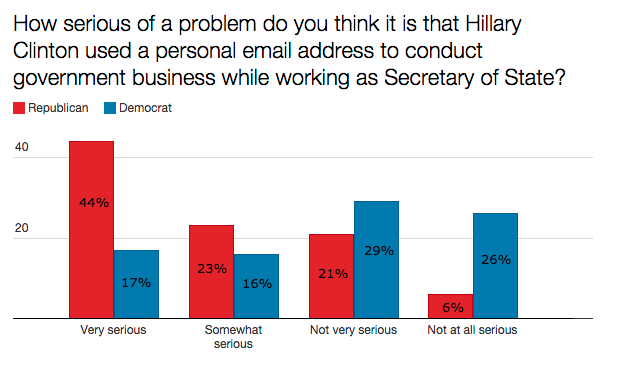 SOMEONE'S TESTING CLINTON NEGATIVE MESSAGES IN IOWA - DesMoinesDem: "Someone is paying to test a series of negative messages about Hillary Clinton among Iowa Democrats. Our household received a call from a Michigan-based polling firm last night. The interviewer asked for my husband by name, indicating that the pollster was working from a list of Iowa Democratic caucus-goers or reliable voters. After typical likely voter screening questions, a ballot test among Democratic candidates, and a few statements about President Barack Obama, most of the the poll focused on unflattering messages about Hillary Clinton." The post includes extensive notes on the questions asked. [Bleeding Heartland]

Who sponsored the calls? - While DesMoinesDem initially speculated that the calls could not have come from Clinton or her allies, Republican consultant Patrick Ruffini noted on Twitter that the survey call came from the same number as calls made on behalf of a 2014 Democratic congressional candidate. A Google search finds many reports of calls from 586-200-0157 from recipients nationwide who were told they had been called by Mountain West Research, a call center used as subcontractor by campaign pollsters. Further searching shows prior instances of polls originating from Mountain West apparently conducted on behalf of Joe Lieberman (while he was still a Democratic candidate in 2010) and Democratic congressional candidates John Delaney and Kathy Goss in 2014. Calls similar to those received in Iowa were made by Mountain West in 2010 on behalf of Democratic congressional candidate Paul Hodes ran afoul of New Hampshire's now defunct "push polling" law, leading to a settlement. The calls -- both in New Hampshire in 2010 and Iowa this week -- appear less like a true "push poll" designed to reach large numbers of voters with negative messages than an effort to test negative messages with a small sample of voters (the 2010 Hodes poll interviewed just 529 voters).

TUESDAY'S 'OUTLIERS' - Links to the best of news at the intersection of
polling, politics and political data:

-FiveThirtyEight announces plans for coverage of the U.K. elections. [538]