Please JOIN US for an anti-torture candlelight vigil dedicated to detainees and victims of torture authorized by George Bush!

Wednesday, September21, 4:00 to 7:00 p.m. Beth El Synagogue, public sidewalk area along parking lot, 5224 West 26th Street, St. Louis Park, Minnesota. (This is the same synagogue that hosted Condi Rice a couple years ago and police have assured us we can protest in approximately the same public sidewalk area.) Has Beth El Synagogue sold out? I'm referring of course, to their 250 tickets ranging in price from $1250 to $3600 that Synagogue leaders predicted would sell out quickly for an "intimate evening" with George Bush. In any event, while the Synagogue's "silver to platinum level" ticket holders go inside to enjoy their hors d'oeuvres and photo-ops with George Bush, we will be outside yelling "SHAME!"

Speaking of shame, should we also remind the Synagogue's Bush boosters that September 21 just happens to be the United Nations' designated "International Peace Day"?

Of more interest to the press and general public, might be the question of why Bush was forced to abruptly cancel a similar fundraising appearance in Toronto at Tyndale University College and Seminary (a non-denominational evangelical university), set for September 20th, the day before Bush's trip to the Minnesota Synagogue. Apparently news of Bush's visit to Tyndale generated strident student and faculty dissent (see articles and here with petition) so naturally much curiosity now exists as to whether Bush's war crimes might finally be catching up with him. When will Bush be "Pinocheted" (as other commentators have put it)?

So join us... we need you at our candlelight vigil to protest the fundraising appearance of this former president who ordered torture: George W. Bush. Is it proper to honor this war criminal who launched pre-emptive, unjustified wars of aggression and "shock and awe" that led to hundreds of thousands of people killed, mostly civilian "collateral damage" and widespread destruction in the Middle East? Join others to stand up against those who torture, who order torture, and who attempt to "legalize" torture.

While it's still light, we'll display "wanted poster" signs, banners, distribute sample indictments and conduct some street theatre in orange Gitmo jumpsuits with dramatic readings of detainee descriptions and actual statements of Bush's torture victims who were held without a right to habeus corpus or to due process. An author of a book on Bush's torture, lawyer James Roth, will speak as will Phil Freshman, a Beth El congregant who also protested against Beth El's prior invitation to Condi Rice.

When it gets dark, we'll hold a candlelight vigil (we have candles available but you can also bring your own). Quite likely there will be some songs and music as well! Sponsored by WAMM Tackling Torture at the Top (T3) Committee. FFI: Call Women Against Military Madness, 612-827-5364. 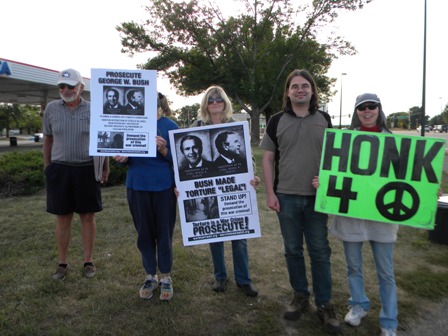