With reporting by Stuart Whatley

A Bush administration memo from 2005, intended to establish a legal basis for aggressive interrogation techniques, contains a footnote that actually describes waterboarding as falling within the administration's definition of torture.

The footnote, found within one of the Office of Legal Council memos released by the Obama administration on Thursday, suggests that officials in the previous White House likely knew that they were torturing terrorism suspects at a time when they claimed to not be involved in such a practice.

Bush officials also acknowledged in a different footnote that for a period of time, waterboarding was "used with far greater frequency" and "intensity" than advised, so much so that medical personnel could not confirm the safety of the detainees. Authors of the memo said they instructed interrogators to change their use of the technique to make it more similar to its practice in Marine Corps training.

The May 10, 2005, memorandum from the attorney general's office to the CIA defines torture as -- among other things -- activity where a subject suffers prolonged mental harm caused by or resulting from "the threat of imminent death." From there, waterboarding was justified as a technique that, while possibly qualifying as a "threat of imminent death," had "safeguards" in place "that make actual harm quite unlikely." The qualifier seemed to clear the Bush White House of illegality.

But in a footnote at the bottom of page 43 of that same memo, the authors dropped the formalities. "For purposes of our analysis," the footnote reads, "we will assume that the physiological sensation of drowning associated with the use of the waterboard may constitute a 'threat of imminent death' within the meaning of sections 2340-2340A."

The admission that waterboarding constitutes a "threat of imminent death," regardless of the safeguards, appears noteworthy. At various points during the Bush presidency, White House officials insisted that waterboarding did not constitute torture. Indeed, throughout the OLC memos, the White House's legal arm sought to advance such an argument.

But the footnote suggests that even they saw the act as possibly crossing the red line between harsh interrogation and torturous treatment. The distinction is apparently based upon the subject's knowledge that he or she will not be killed in the process of being waterboarded. But, as the footnote reads, even if "the CIA" informs "a detainee on whom this technique is used that he would not be allowed to drown," waterboarding constitutes a "threat of imminent death" -- the same definition used for torture.

Perhaps more troubling is the admission in an earlier footnote that for a period of time, officials involved in waterboarding at detention facilities were performing the technique more severely than was deemed medically safe. On Page 41 of the memo, the authors cite an Inspector General report (it's unclear which one) which notes that "Agency interrogator[s]" had "in some cases" used the waterboard in a manner different than "used in the [the Marine Corps' Survival, Evasion, Resistance, and Escape] SEER training." 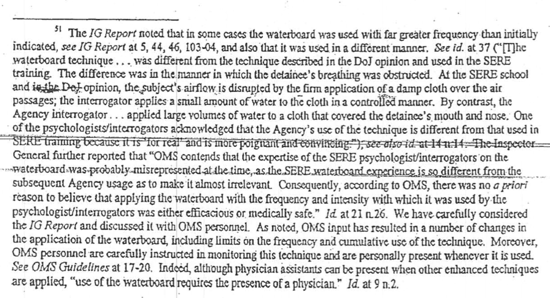 "The difference was in the manner in which the detainee's breathing was obstructed," read the footnote, citing the IG report. "At the SERE school and in the DoJ opinion, the subject's airflow is disrupted by the firm application of a damp cloth over the air passages; the interrogator applies a small amount of water to the cloth in a controlled manner. By contrast, the Agency interrogator... applied large volumes of water to a cloth that covered the detainee's mouth and nose."

The footnote further explains that medical personnel at the detention facility were not comfortable with the implementation of the waterboard in that form. "'According to [medical officials], there was no a priori reason to believe that applying the waterboard with the frequency and intensity with which it was used by the psychologist/interrogators was either efficacious or medically safe.'"

The memo's authors conclude that after considering the IG report, they implemented "a number of changes in the application of the waterboard, including limits on the frequency and cumulative use of the technique."

All of which means that, for a period of time, these limits were not in place.