President Bush was given an Iraqi-journalist-style sendoff on his last full day in office Monday, as tourists and demonstrators lobbed shoes, pumps, boots, sandals and Crocs from Pennsylvania Avenue onto the White House lawn.

Before launching the operation live, the shoe-chuckers took target practice in Dupont Circle on a 20-foot-tall blow up doll of the outgoing president, decked out in the flight suit he wore aboard the "Mission Accomplished" aircraft carrier. 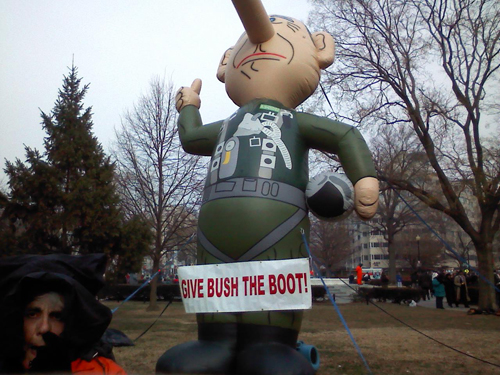 Unlike Muntazer al-Zaidi, the Iraqi reporter who inspired the protest, none of the shoe-throwers in the group were arrested. (Later that day, reports NBC, one man was arrested for chucking a shoe at the White House.)

Marching down Connecticut Avenue with handfuls of footwear, the group of about a hundred was on the receiving end of enthusiastic honks, thumbs-up and waves from people in the street.

The reception was almost as warm from the people guarding the White House.

"Don't hit me!" one officer behind the White House fence joked as shoes rained around him.

Tracey Primavera, a shoe-lobber from Provincetown, Massachusetts, shouted at the guard that she had a pump that would look nice on him.

"I tried that. It didn't look good on me," yelled back the officer. Primavera tossed him the pump anyway.

Tourists on Pennsylvania Avenue picked up shoes and lobbed them at the White House as well. "A lot of random people joined in," noted one organizer, David Swanson. "Everybody wanted to be photographed with an "Arrest Bush" sign.

The tourists also joined a spontaneous chorus that formed. On the night of the election, thousands of people swarmed the White House and sang the old sports classic, "Hey, Hey, Hey, Goodbye." The song made a reappearance Monday, as did a number of tunes apparently written for the occasion, with lyrics such as "Hang down your head, George Bush/Hang down your head in shame," and "Take him to the Hague" -- the latter sung to the tune of "Working on the Railroad."

The target practice on the giant Bush doll began around 11:00 in the morning and was still going five hours later, as thousands of people walking through the circle stopped to pick up a shoe and wing it at the outgoing president. Some threw fastballs like al-Zaidi. Others tied several together in an attempt to land them on Bush's long Pinocchio-esque nose. Children took part. ("Okay. One more shoe, kids," said one parent.) Some folks simply walked up to the doll and kicked it in the shins. It fell over at one point and people rushed it, beating it with shoes. 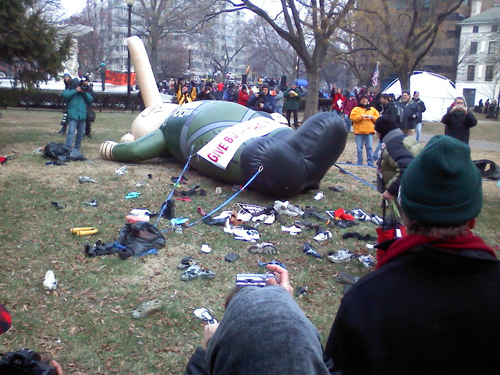 "Ah! I missed!" yelled Sharon Kerr, in town from Austin, Texas, after chucking wide of her presidential mark. She said that she felt a little like the Iraqi reporter for missing. But she noted in his defense, "He had people blocking him."

Kerr began to leave the circle but stopped. "I'm gonna go one more time. I'm gonna nail him this time," she said before winding up and striking him cleanly in the belt.

Cheryl Upshaw, in from Atlanta and sporting a full-length fur coat, hit the Bush doll high on the shoulder. "I was really trying to aim for his heart," said Upshaw, a registered nurse who owns a home healthcare agency. The throw was cathartic, she said, and it seemed to relieve some of her anger.

"It's not that I hate him," she clarified. "I don't hate him personally. I hate what he has done to this country."

Medea Benjamin, a cofounder of the antiwar group CODEPINK, said the protest was a way to "get the Bush era out of your intestines."

"I was a little reluctant because I want to be in a positive mood," she said. "I don't want to be seen as doing something violent. The shoe-throwing is borderline, but the intent is to insult, not to hurt. There's a fine line."

Once all the shoes had been tossed onto the White House lawn, the officers collected them and piled them into the back of a small truck. "The next person who throws them gets arrested," said one, though the entire pile had already been thrown.

As the protesters headed back toward Dupont Circle, a Secret Service agent left them with a parting observation.