There's an old joke in the car business: A customer visits a dealership and, after enjoying the overwhelming attention of a salesperson, does buy a car. After signing the contract, the salesperson becomes distant, remote, and informs the buyer of the industry's "Three Cs," saying: "See the car, see the keys, see ya later!"

Leave it to President Bush to add a fourth C -- "CYA!"

This new agreement gives General Motors and Chrysler a total of $17.4 billion between now and February. After January 20th, the challenge of "What to do about the Detroit Three?" will be squarely in the lap of the new Obama Administration, which was Bush's prime motivation in crafting this deal. It's a classic Cover Your Ass retreat action by Bush, made to unravel completely after the Obama Inauguration because the mandates in the agreement are not really mandates -- they're all still negotiable.

It took less than 24 hours for Treasury Secretary Henry Paulson to change his position from refusing the Detroit Three access to Troubled Assets Relief Program (TARP) funds, to his "getting religion" and agree with President Bush that, of course, sure, why not? ... The loan money for the Detroit Three should indeed come out of the $700 billion TARP ($350 billion left), created to bailout - not loan to - the financial industry. 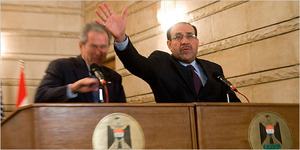 (Bush can duck shoes, but not history; his failure to help the country's auto industry in meaningful ways is just one of the many disasters of his administration).

Yesterday, the White House demanded (and got) even more concessions from the United Auto Workers, while few were requested of the carmakers. The New Detroit Two are now expected to drastically restructure their 100-year old industry in the next 14 weeks. And to do it with the same management which got them into this mess.

By March 31st, GM and Chrysler, if either still exists, must give Washington a "viability plan" explaining how they're going to build high-mileage cars and trucks which Americans will really want to buy, but mostly their plans to cut, cut, cut costs, then cut some more. And to tell Washington how they're going to pay it all back in three years. 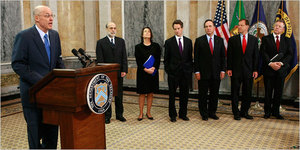 (And here he is - Your new Default Car Czar, America, Henry Paulson! He did such a great job bailing-out Wall Street, just imagine what he'll do with our nation's auto industry!)

If GM and Chrysler renege on the repayment, or Washington doesn't like their viability plans, they'll call the loans back immediately with the only option then for these New Detroit Two being "managed bankruptcies."

Who will judge the submitted plans? Why, America's Default Car Czar, Henry Paulson. Now he's in-charge of the TARP, where he did such a bang-up job, and, as of today, the Detroit Two (or Three, when Ford asks for help).

Where is Ford in all this? Saying thanks, but no thanks, we don't need any cash right now. But Ford's future depends on something over which they have no control: whether Chrysler and GM survive. If either fail, then so do their supplier companies, which are shared by all three carmakers. Ford, unable to replace these suppliers, then fails as well.

(Why is this man smiling? Because he's Alan Mulally, CEO of Ford, and before he took the job he insisted Ford put a "signing bonus" of some $20 million in his bank accounts. Wouldn't you be smiling, too?)

Ford's bet is based on their having enough cash to get them to January 21st, when they believe they'll have a friend in the White House, not a president concerned only with his reputation and unwilling to do the hard work necessary to save their industry.

Under this loan/bailout, the Detroit News reports, the UAW is being asked to move up contract negotiations, scheduled for 2011, to the end of 2009. Then, UAW worker pay is supposed to be made equitable with the pay and benefits given non-union foreign transplant blue-collar employees. The Congressional Detroit loan/bailout bill, voted-down by Republican Senators from states with transplant carmaker factories, called for those changes to be enacted immediately. 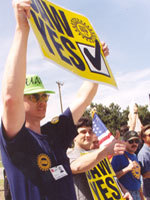 (Soon, Republican Senators from southeast states with "right-to-work" rules, aka union-busting laws, will lower the pay for auto industry workers so low no one will want the jobs. That's why Honda created Asimo the Robot - To work on their assembly lines. And I'm not kidding).

The UAW has already agreed to a two-tier wage/benefit system with new employees being paid $14 an hour, rather than the $23 average UAW members had been getting.

Further, the UAW will be asked to accept stock rather than cash for the billions of dollars of retiree health care liabilities being shifted to a union-run trust fund by the three carmakers.

Anyone see a trend here?

At a GM press conference Friday morning, after the Bush announcement, Executive VP and CFO Ray Young gave a real-world indication of what the UAW has conceded in just the past two years, and what management seems intent on doing.

Young said that in 2007, GM's US hourly labor costs totaled $18 billion. In this year, 2008, that amount had dropped to $8 billion. While GM executives are no doubt pleased, it really means GM's hourly workers this year made $10 billion less than they did the year before. 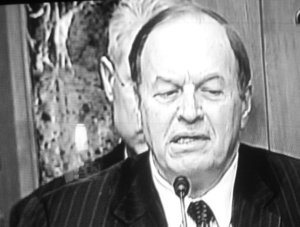 (Republican Senator Richard Shelby of Alabama led the successful charge in the Senate to block the first Detroit loan program which was passed by the House. Some union supporters may think twice about buying cars and trucks assembled in Alabama, while others are calling for a boycott of all the state's products).

Ex-Clinton Administration Secretary of Labor Robert Reich said on the Rachel Maddow Show on MSNBC Friday night that every aspect of this deal is "absolutely negotiable."

This way, Reich said, "Bush avoids Detroit bankruptcies happening on his watch, and he placates his Republican colleagues so they don't feel that he has turned on them."

This "agreement" is just another part of the recent "Bush/Cheney Revisionist History Farewell Tour." Can't wait to get my commemorative satin jacket. This agreement was created to fail, just as long as that failure didn't happen while Bush was still president.

Read More:
Should the Government Bail Out the Big Three U.S. Automakers? HuffPost Bloggers Weigh In