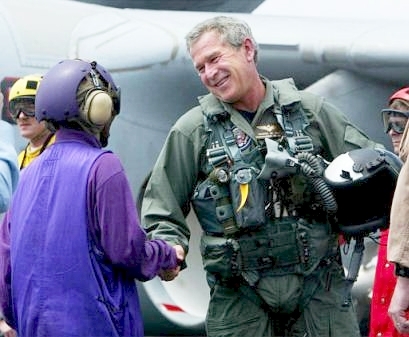 Again with the mission creep. I don't know how many times Mr. Bush has expanded our goals in Iraq, but what he's offering tonight takes it around the bend and back again.

On an enduring relationship with Iraq that requires many fewer American troops:

This vision for a reduced American presence also has the support of Iraqi leaders from all communities. At the same time, they understand that their success will require U.S. political, economic, and security engagement that extends beyond my presidency. These Iraqi leaders have asked for an enduring relationship with America. And we are ready to begin building that relationship -- in a way that protects our interests in the region and requires many fewer American troops.

Mr. Bush can throw in the "fewer American troops" pony, but the the highlighted section above is ominous. What it implies is that Mr. Bush is about to enter into an agreement with the Maliki government that will extend beyond his presidency and commit the U.S. permanently to Iraq. This was obviously the plan all along, especially when you take in the largest embassy on earth, and the football-long bases for troops.

Korea is the model? Only in Bush's little mind. We haven't taken serious casualties in Korea since the late 1960s. Does anyone believe casualty rates will plummet with Bush's new Operation Enduring Nightmare? Just for the record, Bush has been hinting at this for a while (via email from a friend):

"Korea may be Bush's model for Iraq, officials say"

"President Bush is looking at the decades-long U.S. troop presence in South Korea as a model for a future U.S. role in Iraq, senior administration officials said Thursday." [CNN, 9/13/07]

"Several visitors to the White House say that in private, he has sounded intrigued by what he calls the "Korea model," a reference to the large American presence in South Korea for the 54 years since the armistice that ended open hostilities between North and South." [The New York Times, 6/3/07]

"White House spokesman Tony Snow said Bush would like to see a U.S. role in Iraq ultimately similar to that in South Korea." [Reuters, 5/30/07]

"President Bush would like to see the U.S. military provide long-term stability in Iraq as it has in South Korea, where thousands of American troops have been based for more than half a century, the White House said Wednesday." [The Seattle Times, 5/31/07]

"S. Korea Eyed as Model for U.S. Troops in Iraq"

This new plan for a permanent commitment in Iraq, not just a long-term presence that has been Bush's launching pad to tonight's gem, should not go unchallenged by Congress. Of course, we're likely to hear a chorus of we don't have the votes blah-blah-blah instead.

Oh, as an aside, the military isn't fooled by Bush's Iraqi hearing pageantry. The military are supporting the Democrats in droves. Sign 'em up and get 'em to run for office.

Iraq as another Korea?

Just when you thought it couldn't get any worse.