On Friday, a young, white, suburban man left his mother's home and committed a massacre. Unfortunately, a narrative that should be shocking is starting to sound more like a tired trope. Before the Sandy Hook Elementary School shooter was identified, we could have guessed who he'd be.

In the wake of the heartbreaking Newtown shooting, as we collectively mourn the loss of 20 young children and 7 adults, a lot of very necessary conversations have begun -- about gun control legislation and about greater federal funding for and access to mental health care. In addition to these indisputably important topics, we need to talk about this country's twisted vision of masculinity.

Of the 62 mass shootings that have occurred in the United States since 1982, 61 have been committed by men. The average age of these men was 35, and 44 of the 61 male shooters were white, according to Mother Jones. I don't believe that men are necessarily genetically predisposed to violence or that men are "worse" people than women. (In fact, recent numbers on violent crime indicate that women are slowly beginning to close the gender gap for violent crime arrests.) I do think, however, that the statistics on men who massacre say something upsetting about the way we equate masculinity with physical power. That sentiment has never been so clear as in an advertisement for the .223-calibre semiautomatic Bushmaster rifle -- the gun that 20-year-old Adam Lanza used to murder 27 people, and the civilian version of the assault rifle our troops have used in Afghanistan and Iraq. This morning author and activist Jessica Valenti tweeted an image of the ad: 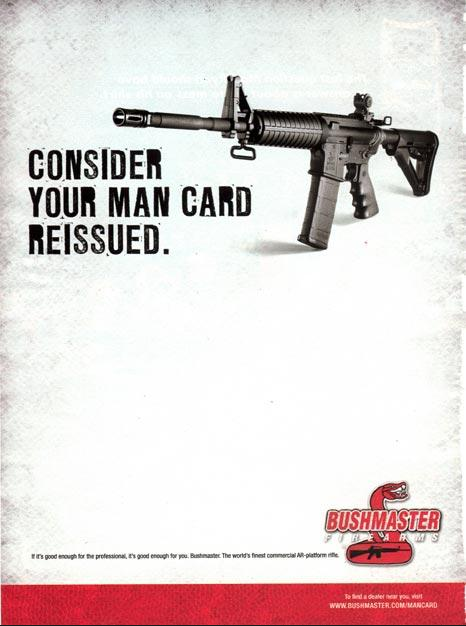 The tagline reads "Consider Your Man Card Reissued." In a press release for the marketing campaign, distributed in 2010, Bushmaster Firearms explained how one becomes a "card-carrying man":

...visitors of bushmaster.com will have to prove they're a man by answering a series of manhood questions. Upon successful completion, they will be issued a temporary Man Card to proudly display to friends and family. The Man Card is valid for one year.

Visitors can also call into question or even revoke the Man Card of friends they feel have betrayed their manhood. The man in question will then have to defend himself, and their Man Card, by answering a series of questions geared towards proving indeed, they are worthy of retaining their card.

The fact that a company is selling deadly weapons based on the premise that it will up the purchaser's "man cred" is disturbing in itself. The message that it sends about what it means to be a man in America is even more so -- especially because, as Gawker reported, this campaign has been running for more than two years. Guns may not kill people (on their own), but disaffected men with easy access to guns and little understanding of how to safely and sanely express their frustrations with the world certainly do. These same men grew up in a country that glorifies male violence as entertainment. We need to start asking ourselves why we've let 30 years of mass shootings overwhelmingly committed by men occur without bothering to really question the pattern that emerges.

Of course, I'm far from the first person to point out this connection. AlterNet's Chauncey DeVega asked two days ago why we're so reluctant to "delve deeper into the relationship(s) between whiteness, masculinity, and gun violence." And in a press release for his 2008 book on the subject of hypermasculinity and violence, UCLA professor of education Douglas Kellner said: "The school shooters and domestic terrorists examined in this book all exhibit male rage, attempt to resolve a crisis of masculinity through violent behavior, demonstrate a fetish for guns or weapons, and represent, in general, a situation of guys and guns amok."

As we struggle to make sense of Friday's massacre, we need to begin bringing masculinity into our conversations. And we need to teach boys that being a "real man" means using your words instead of your fists ... or your knives ... or your semiautomatic rifles.