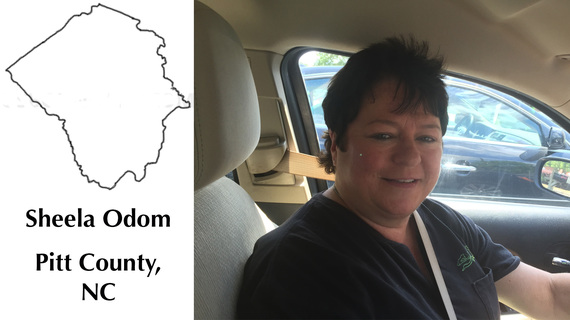 "I'm not just a Republican, I'm a conservative Republican."

Yet she prefers Bernie over Trump and Clinton. And who did she vote for in 2008? Sheela Odom helped turn a red county blue with her vote for Barack Obama in 2008. At 57, Sheela Odom is just two years older than President Obama. However, she feels he was born in a vastly different world from hers.

Odom spent most of her life in Pitt County, home of East Carolina University. Life was relatively comfortable, economically speaking, until she lost her job as a clerk at an office equipment and supply company in 2009. The layoff forced her to move in with Mom and her stepfather around the time Odom turned 50. "Mom is 80. Her husband is a little bit younger.. He's a Southern Baptist preacher and he also does construction... I help them and they help me and it's a good fit right now."

Odom is now an Uber driver who pieces together other part time opportunities. I spoke to her in Greenville, the county seat.

The transcript below has been lightly edited for clarity:

Sheela Odom: I just don't know if Trump would be good for the country. The country is going in the wrong direction. And I don't think Hillary is the answer because I think she is a liar. She claims to help the people that need the help and wants to help them but yet she goes out and she wears $12,000 shirts and I think that the Clintons have been very, um... What's the word for it? I don't think they've done the right things for the people. I do know that. That's my opinion. I think that they're hypocrites. And Bernie- he's an older fella, but I think he's got the American people in his heart. Even though I believe Bernie is a socialist! But, out of the three, I would have to go-- Out of the three I would have to go with Bernie.

David J Dent: So you're a conservative Republican who supported Bernie Sanders?

D: Do you think he should fight Hillary all the way to the convention?

S: He's a down-to-Earth person. I think he speaks his mind, I think he's honest, and he'll tell you right away, 'I'm a socialist, I want to do this...' He's gonna actually raise taxes. There's no doubt about that. And it will hurt some people, but in the long run- like I say- I think he's got America at heart. You know, our best interests in his heart. I don't believe that the other two do.

S: I voted for Barack Obama when he was first in office but I did not vote for him second time around.

D: You voted for Romney the second time? What bothered you about Obama's first four years?

S: It's not Obama himself. It's certainly not racism. People think racism. I'm certainly not a racist. I just believe that Obama -- he has an agenda to change America into what he wants it to be. And for me, I want America to stay like it's always been from its founding fathers and not that Obama's a bad man but he wants to change America. He wants to get out of the colonialism thing. He wants everybody to be equal, which I guess, wouldn't be great if we could all have the same, homes and cars? But until you get out there and work and make something of yourself, you never will. ,, If everybody could have the same thing, what reason would you have there to get out there and work if it's always given to you? And I believe Obama really does not want America to be the number one superpower anymore and I believe he's truly a Muslim. I don't have any problems with his life and where he comes from but I lie for my America to stay the same.

D: What did he do to give you that indication that he's a Muslim and that he wants to change America?

S: In everything that he does. I mean, it's absolutely everything. He... He's depleting our military, and he took away people when we were fighting in different places. He's taken away troops. And once you do that, if you've already won the war, at least where you're going to fight to free these people-- If you're fighting to free these people and then you decide to pull out a little bit too early, all the people that died trying to give these people freedoms was for nothing. You take the military away, you deplete your military, you weaken your country. Other peoples will come in and destroy you and that's what he's done. There's so many things I could say. And you know taxes and people. What is it? Benefits. All that kind of stuff. Welfare. It's good to help people but you need to let people start helping themselves so we can have a reason to get out there and work and not have everything handed to you... And that's just my beliefs... He's contributed hundreds of thousands of dollars to the Muslim Brotherhood... And different radical Islamic groups that I think a whole lot of people know about.

D: He has? And where did you learn that?

S: And I learned that from my news outlets that I listen to... I guess you hear what you believe and you believe what you hear... And I've not only heard it from one group, because I've read it as well because I go online. But like I've told you before, it's hard to know exactly what all the truths are. And what are not truths. But that's my opinion from what I've learned and read and listened... You know, I love CNN, I've always listened to CNN, you know. News, and stuff like that. But, you know, just from what I've lived and learned and read and digested from things I've heard, I believe he's done that, yes.

D: What are your favorite media outlets? What news outlets that you watch and get most of your news and information.

S: Well I am a definite FOX and Friends... I mean like I said, I'm a conservative Republican. I just don't like the gentleman that's going to be our nominee. So I'm taking, like I say, the lesser of the two evils. Which is why I'd like Bernie. But when it comes right down to it, who would I vote for in the polls? If I went in and decided I was going to do in and vote, it would not be Hillary. It would not be Hillary. We got to take a chance at something different! Trump could go in there and destroy us. Totally destroy our country. But right now, in my opinion, it's not getting better, it's getting worse. That's my opinion.

D: What was it about Obama that made you vote for him in the first place?

S: Well like I say, I didn't know anything about Obama other than he was from Chicago. What was he, a senator or something? Okay. And he just looked fresh and clean-- I don't mean clean in the physical sense-- I didn't mean clean physically, I mean clean, fresh ideas. And of course naturally, with the first black American president I thought, he's got everything going for him. Let's get a first black American in. He's smart as a whip; he's got good ideas. Let's go with him. And then when he got in office, things I've read and seen and not witnessed personally, of course, but I just don't think he's got America's interests at heart. And that's why I didn't vote for him the second time around. I thought Romney was a better candidate to get us back to where we were.

S: I pretty much been here in Greenville my whole life except I was in Raleigh a few years. When I worked at a uniform company in customer service, and that's been a while back. But it was a uniform service- we sold uniforms to fire, police-- all the services that a city would offer to the public. I've never raised a family. I've been in a couple relationships and kids never came up and right now I'm single. I had always been in a good place from the time I graduated high school, which was '77. It was easy to get a job back then. Back in Raleigh, on a whim on a weekend, had three opportunities for a job within a week. And things are just different now, it's just different. I don't know exactly how or why the climate's changed.. It's just difficult now for me since I got laid off in 2009 and I've had other friends that were laid off as well... I know that it's hurt a lot of people. "

D: Where were you working?

COECO Office Systems right here in Greenville. On Arlington Boulevard-- it's a Carolina office equipment company. And I worked in parts and supplies doing the ordering and customer service-- sales, different things like that. The company didn't actually go under but there was a takeover. Once they did that, they came in and replaced individuals with the people they wanted to replace with. Our company cut back for years and then when this other company came in and overtook us, that pretty much wiped out the people that were already there except for service staff. And so they brought in their people and I looked around. .. I've worked in different places-- I've worked at the airport here as well... I just decided after a point with my age and stuff that I would try to help out my mom and try to pick up work as I could find it. ... Honestly just about a year or two ago. Things started looking up for me. ...I finally got this (Uber) on my own. Had to start doing online stuff. They say the economy is doing better and you look around and say, 'hey, it looks good,' and then on the other side you hear that it's not doing that good and the jobs market is down and then on one hand they say it's up. Sometimes it's hard to believe because one media outlet will say one thing and the other conservative groups will say something different. Sometimes it's hard to know what truly to believe. I can only go on what my life's been like. It's been very difficult for the past 5-6 years. "