Brooklyn's already percolating artist neighborhood called Bushwick continues to thrive despite the circling of real estate agents, lifestyle brands and celebrity chefs. Born in the mid-late 2000s as its older sister Williamsburg to the West began to professionalize, this noisily industrial, dirty artist haven got a reprieve from gentrifying forces when the deep recession slowed the rise of rents for artist spaces, which remained still relatively cheap by Manhattan's standards. Today the area boasts a diverse influx of artists, students, cultural workers, and entrepreneurs who are experimenting and collaborating on projects and shows. 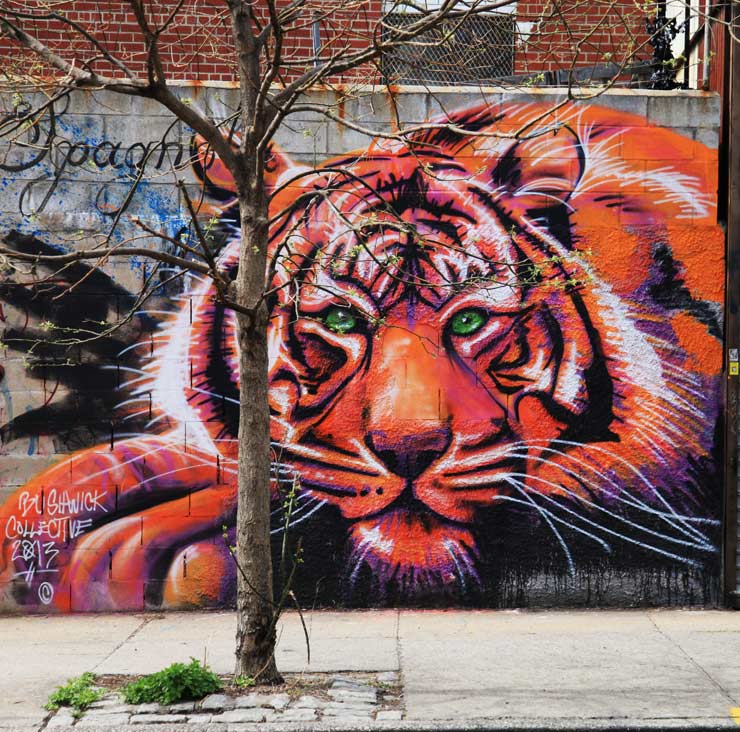 That radical economic downturn probably also nurtured the nascent Street Art scene here, which was one of the early outliers of a cultural influx as artists and explorers began to skateboard to the local delis and stare at laptops for hours in the one or two cafes that offered Wi-Fi. Outcroppings of this new art movement combined with old-school graffiti to pop up on selected concrete and corrugated walls, signposts and deteriorated blocks where the authorities were disinterested and the neighbors only partially curious in their activities.

It's an age-old New York story by now; a neglected or winding down post-industrial neighborhood reacts to the incoming and odd-looking artists with a sort of bemused affection, happy that at least the block is getting some attention for a change. Puzzlement eventually leads to familiarity and then buying you a sandwich -- and then asking you to paint a mural inside his foyer. While national and international Street Artists were already making Bushwick a stopping point thanks to some of the earliest galleries like Ad Hoc and Factory Fresh, the scene recently got newly shot in the arm by a local resident who is facilitating much desired legal wall space to a crowd of artists who otherwise would be hunting and hitting up less-than-legal spots. Not to worry, there are plenty of aerosol renegades and ruffians scaling walls at night too; this is New York after all, yo. 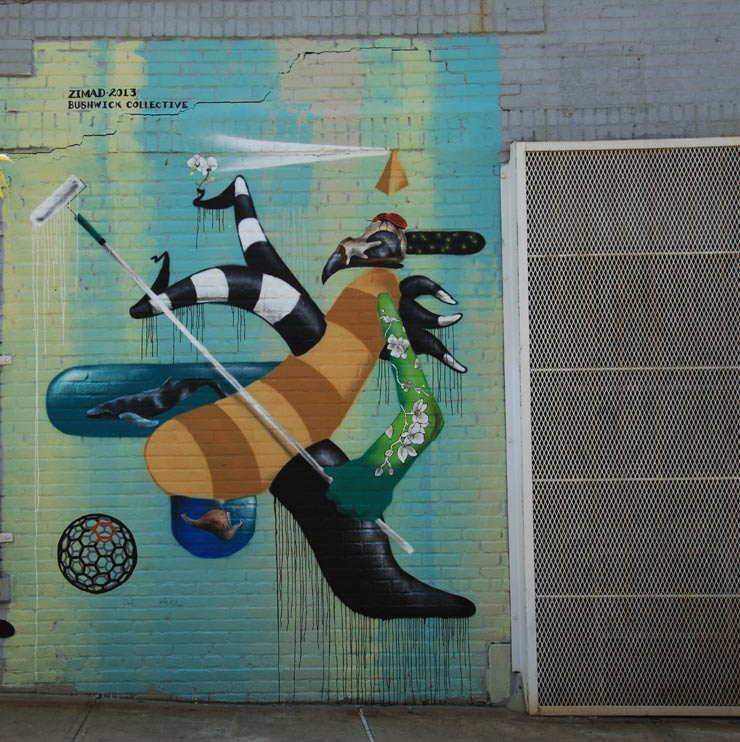 But for now the Bushwick Collective, as it is newly christened by wall-man Joe Ficalora, has infused an adrenaline rush of creativity inside and outside the area that is roughly bordered by Flushing Avenue, Starr Street, Knickerbocker Avenue and Cypress Avenue. The Collective has guidelines on content (nudity, politics, profanity) so the works are not completely unfettered in the true spirit of Street Art/graffiti, but most artists are happy for the luxury of time to complete their work and not look over their shoulder. With a selection of murals that are densely gathered and easy to walk through, the new collection has attracted attention from media folks (and tour guides) on the main island brave enough to venture into the gritty wilds of Brooklyn for a Street Art safari.

As Bushwick hosts its 7th annual open studios cultural event this weekend, intrepid pedestrians who march through opening parties, rooftop DJ jams, dance performances, live bands, transcendent costumery, sidewalk barbecues, open fire hydrants and more than 600 open artist studios will also be buffeted by a visual feast on the streets themselves. As long as the L Train is running (fingers crossed) you can just get off at the Morgan stop. From there it should be pretty easy for any curious art-in-the-street fan to be regaled with big and small works of graffiti, Street Art, tags, wheat-pastes, stencils, rollers, murals, and ad hoc installations all day and night. 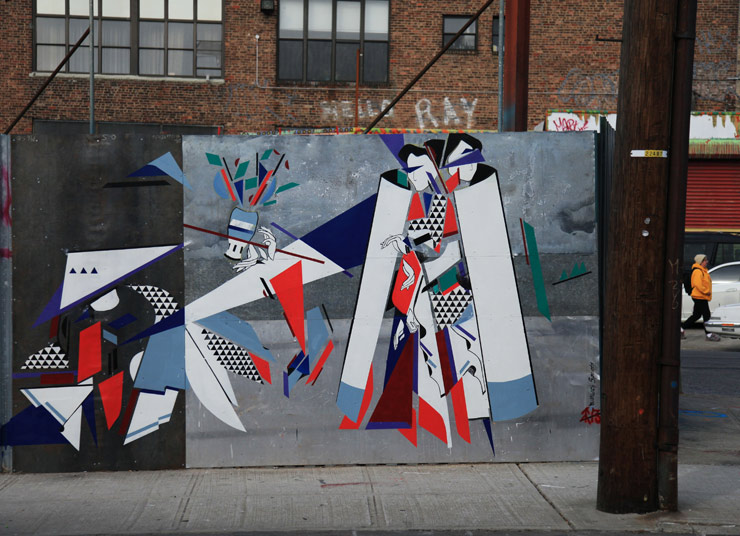 A shout out to Arts In Bushwick, an all volunteer organization that has steadily grown and fostered an open sense of community inclusiveness each year for Bushwick Open Studios and to the many volunteers who have contributed greatly to the success of many of the cultural workers here. Without an open studios event many of these shy and quirky artists and performers would simply have stayed unknown and unknowable.

So far Bushwick still has the unbridled, imperfect D.I.Y. enthusiasm of an experiment where anything can happen, but grey ladies with kooky bright colored spectacles have already begun to flip it over to inspect it with one hand while pinching their nose with the other, so savor this authentic moment. Ethereal by nature, you know the Street Art scene is never guaranteed to you tomorrow -- neither is the mythical artists bohemian hamlet of New York's yesteryear. For now we're hopping on our bikes to catch a golden age of Bushwick before it's repackaged and sold back to us at a price we can't afford.

The first series of images are walls from the Bushwick Collective, followed by a series of walls that you may also see in the neighborhood. 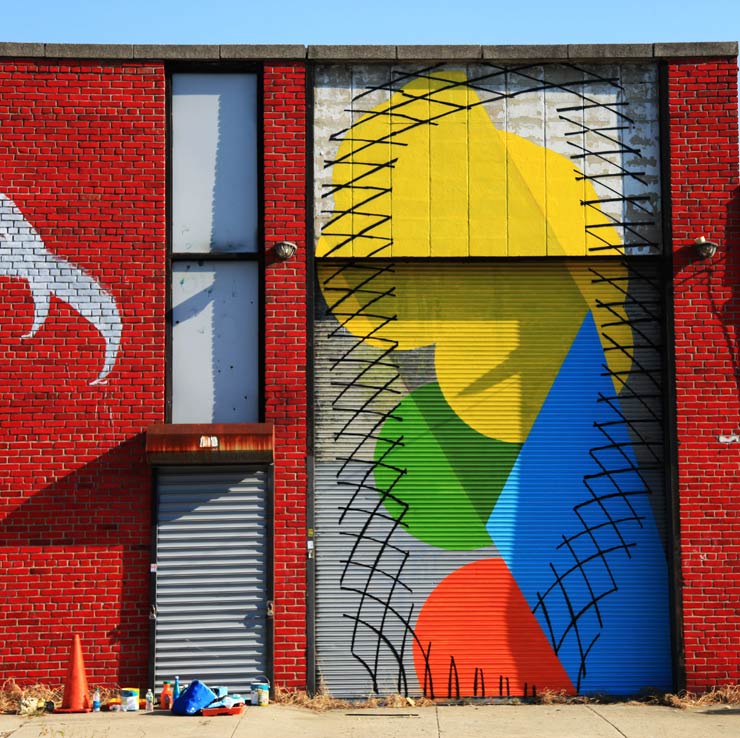 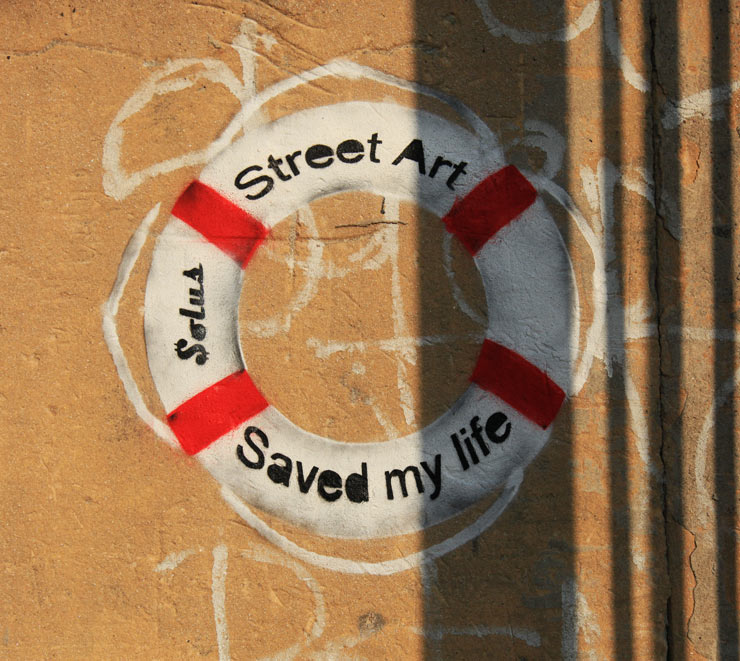 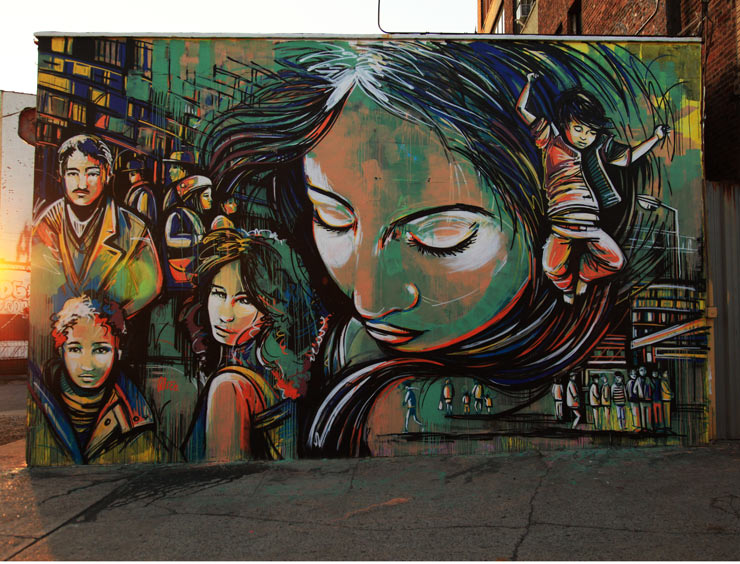 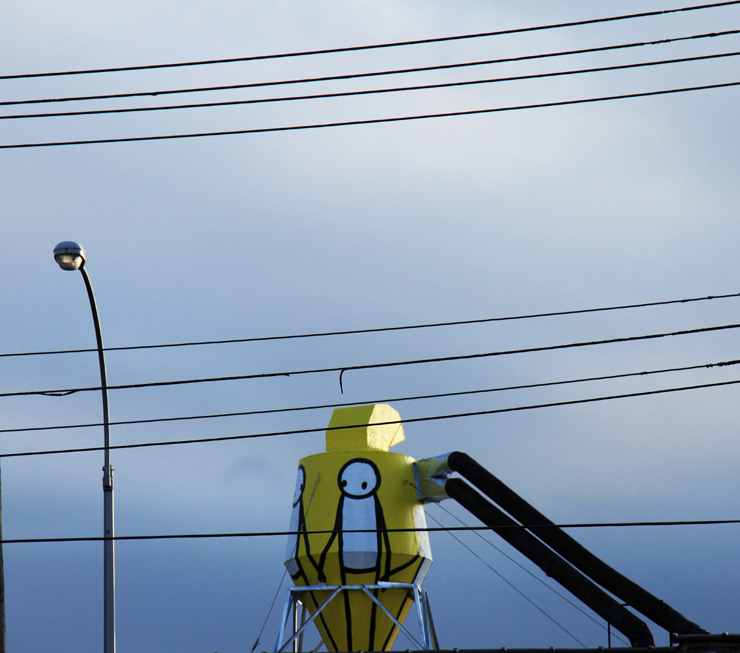 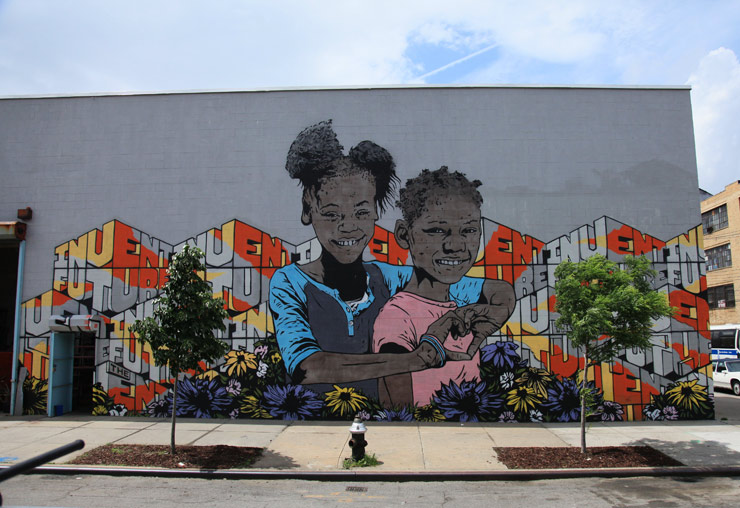 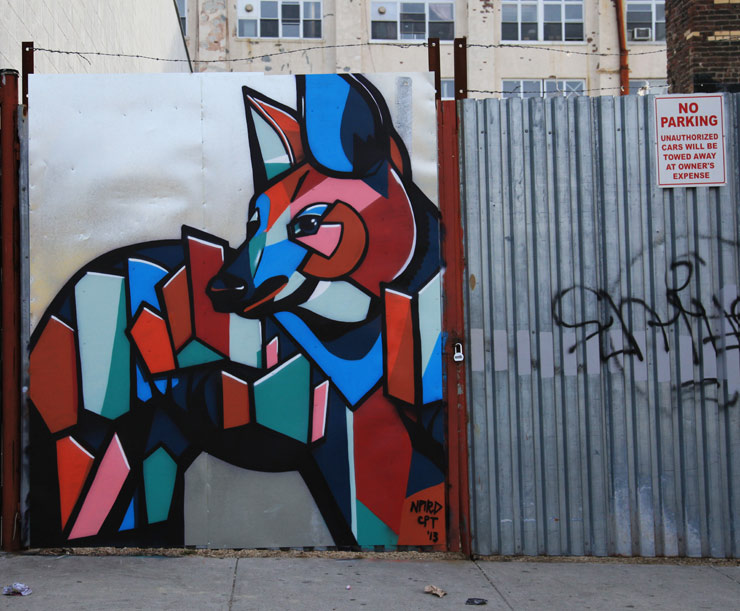 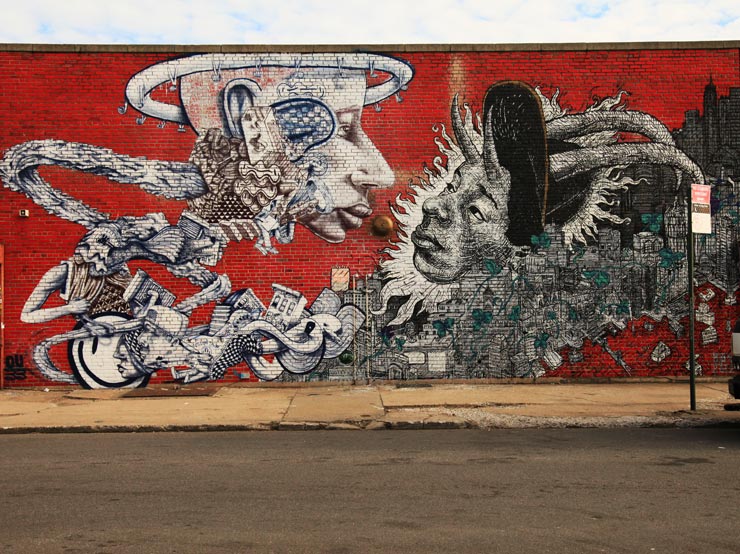 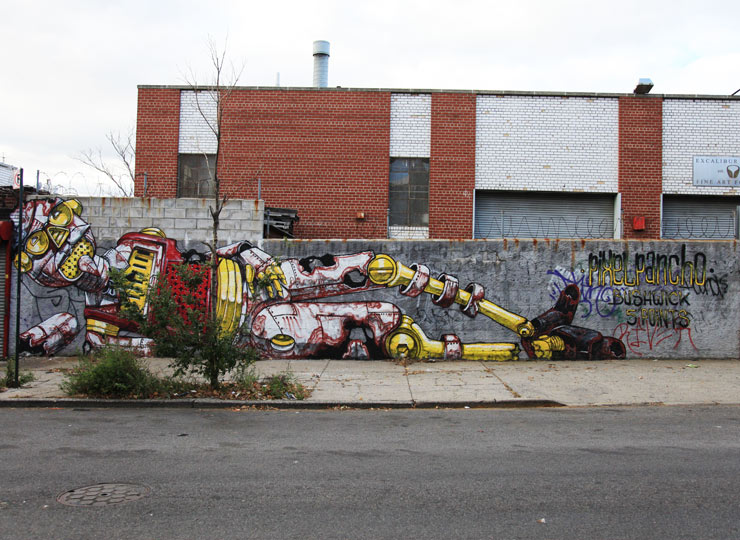 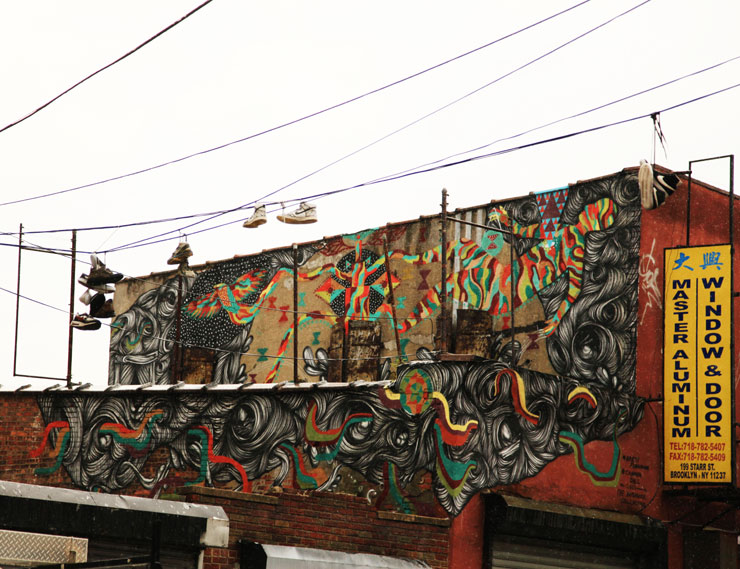 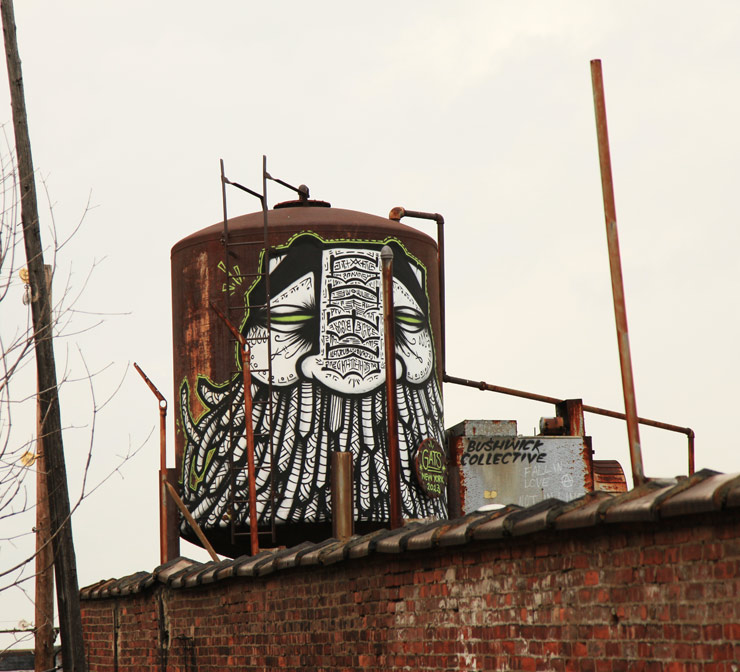 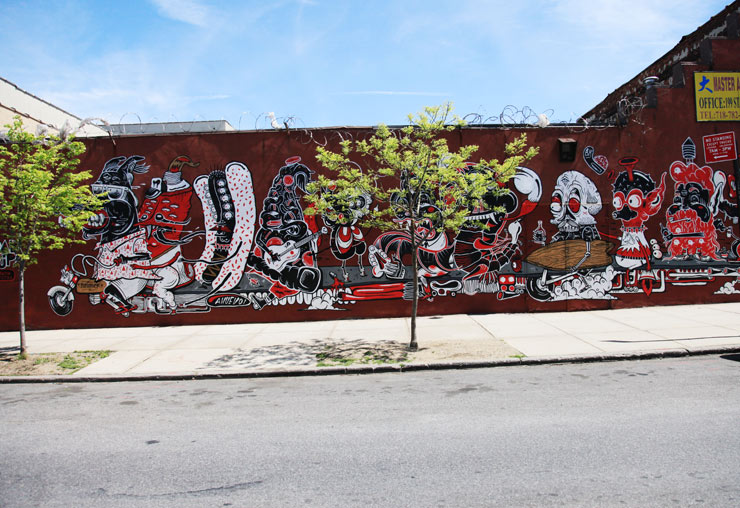 Here are a series of walls not related to Bushwick Collective. 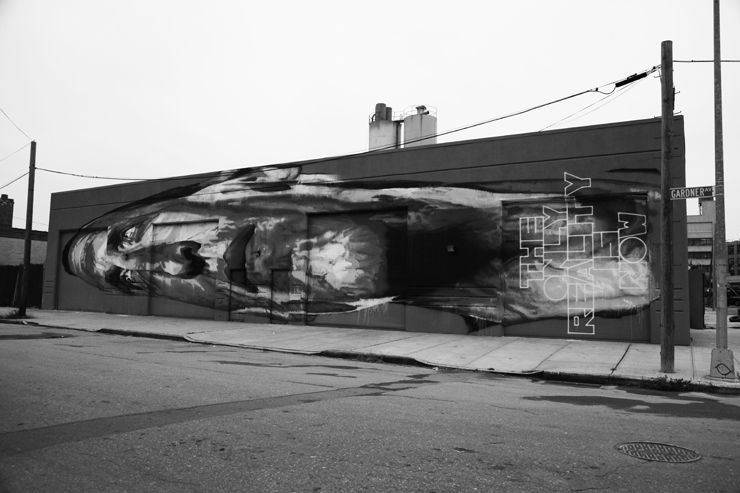 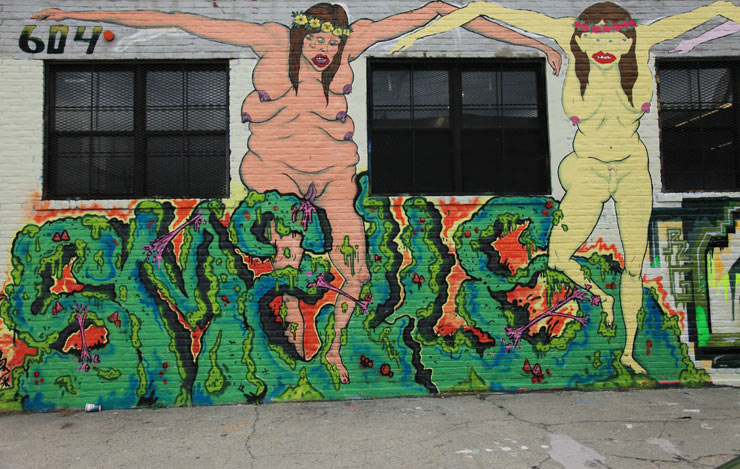 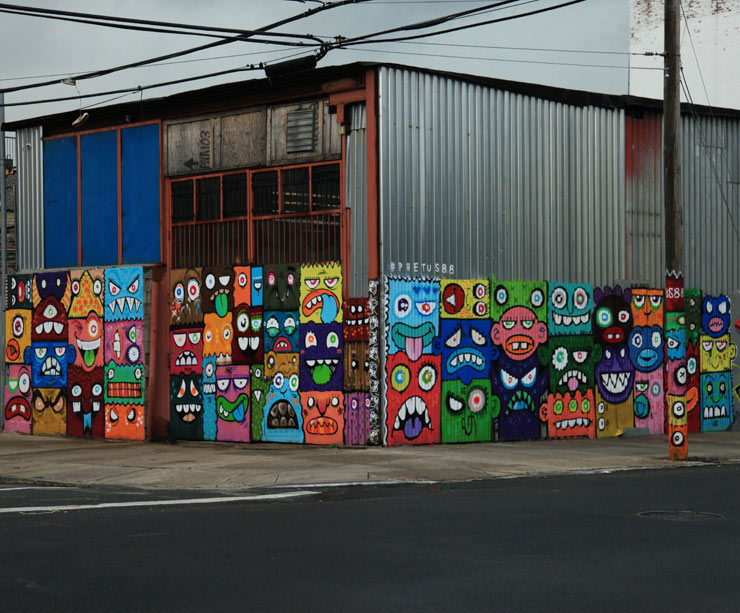 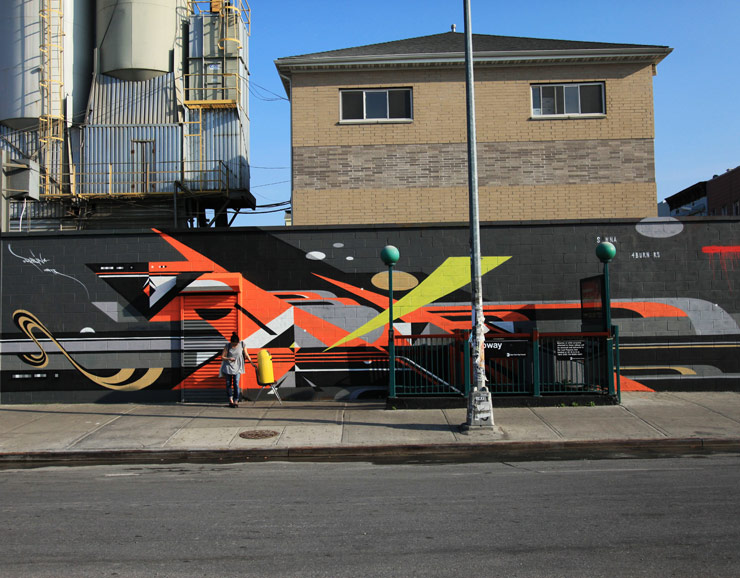 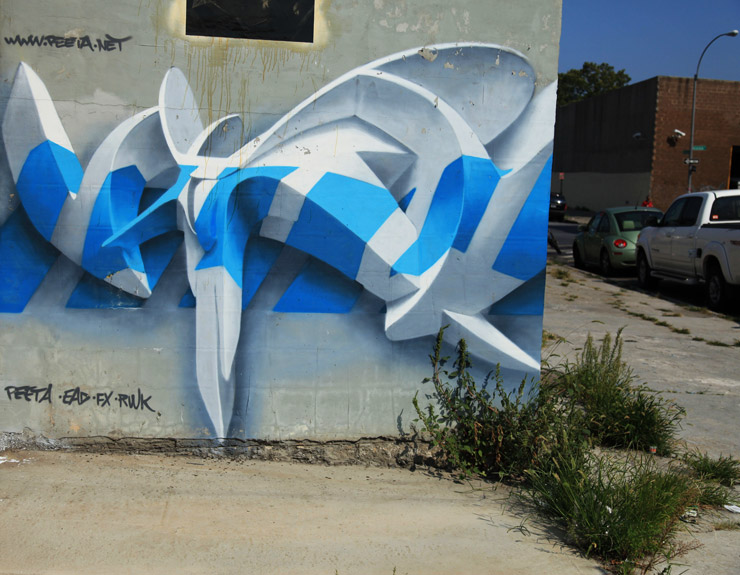 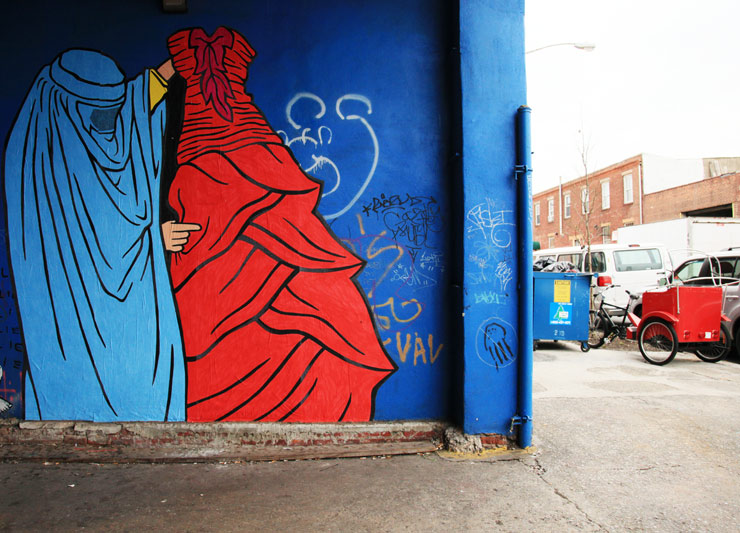 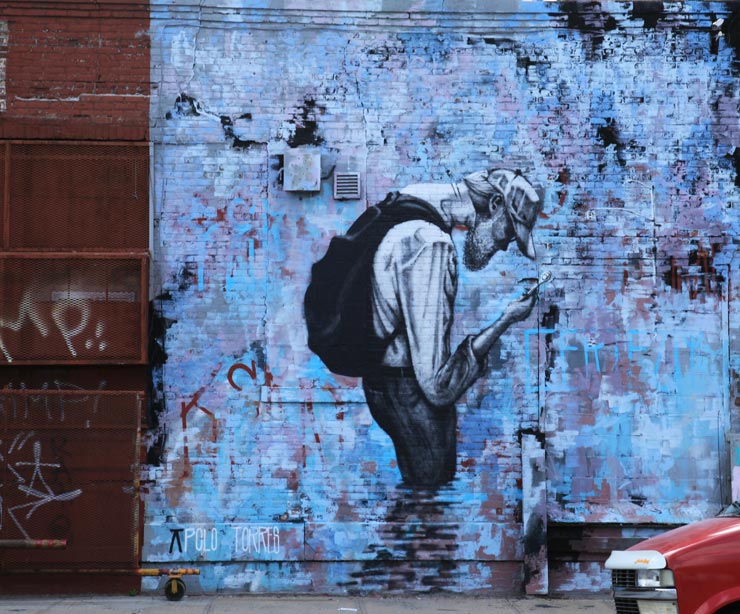 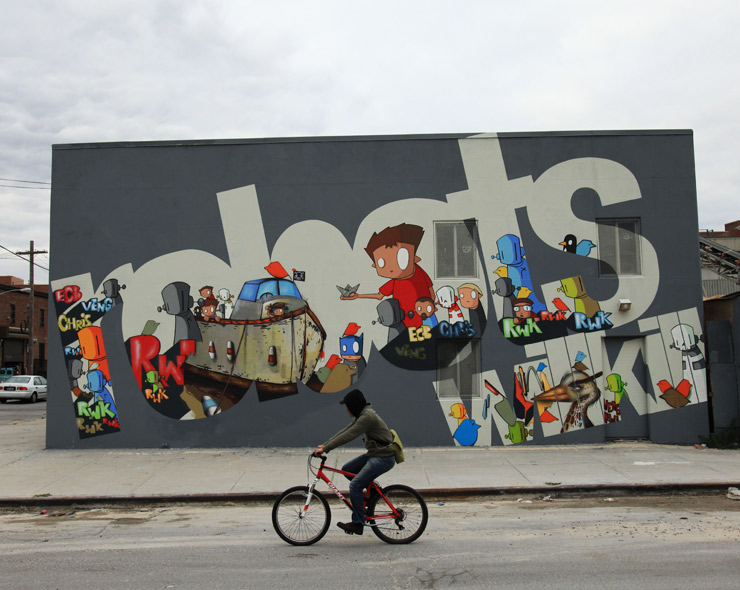 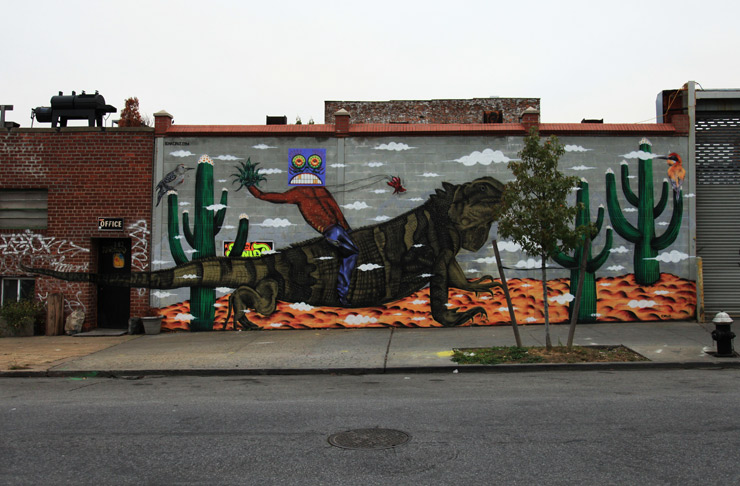 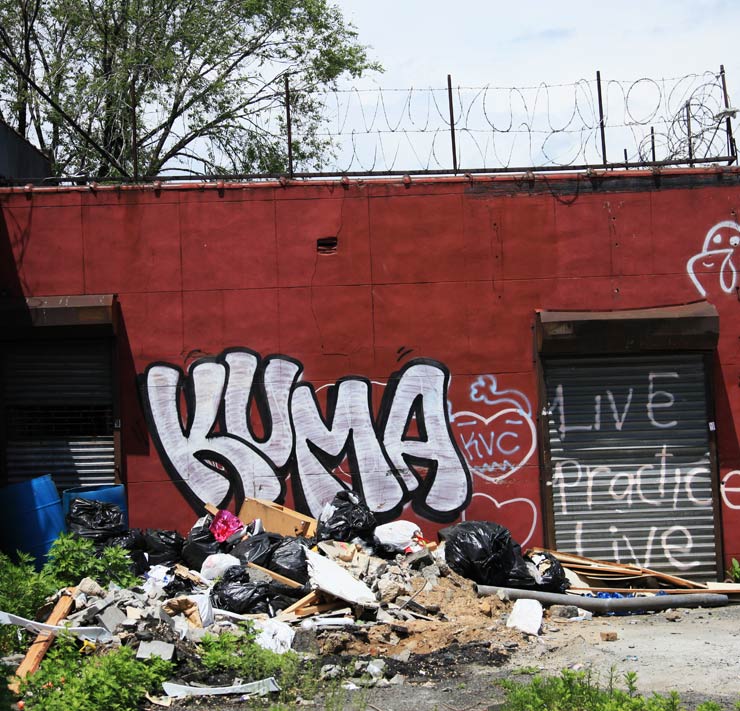 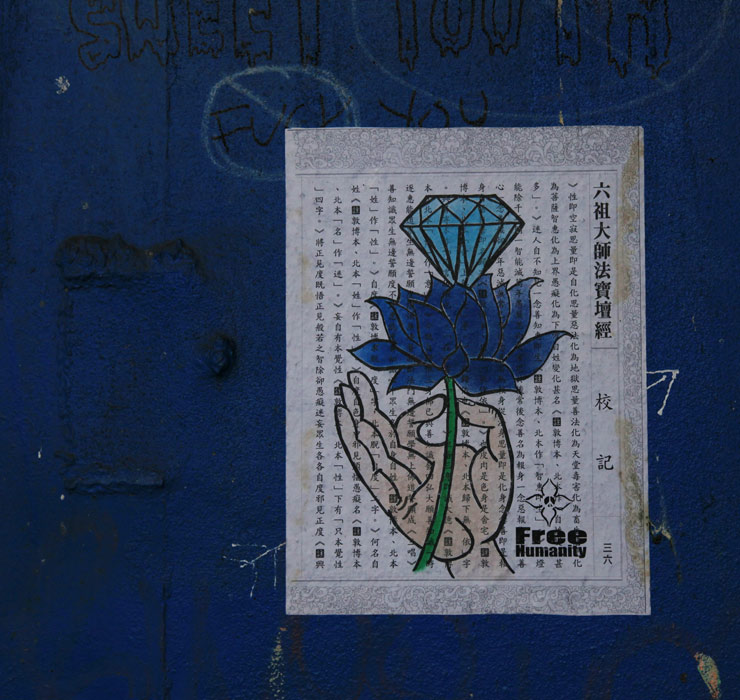 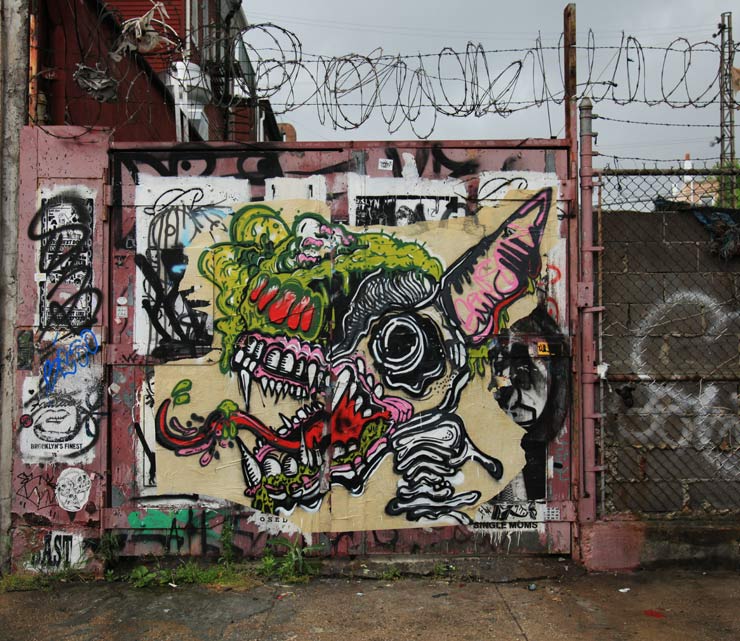 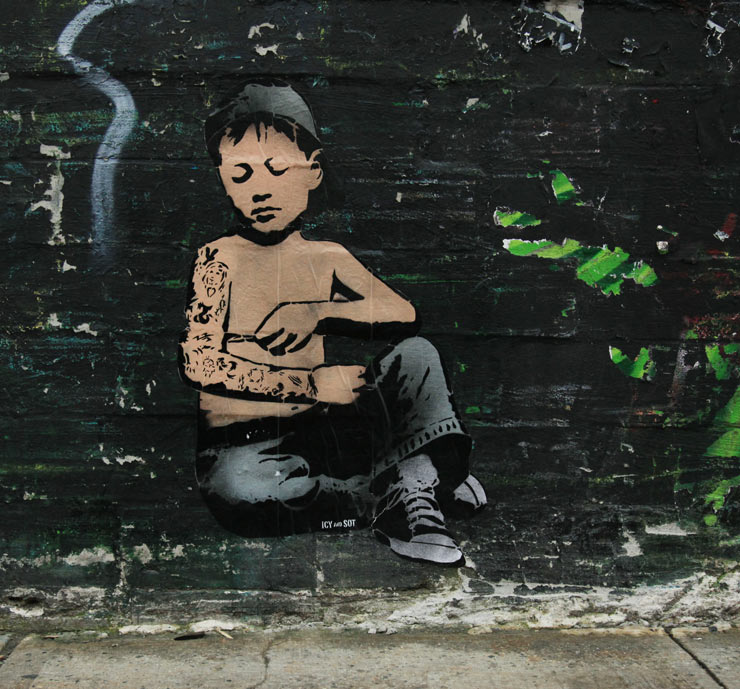 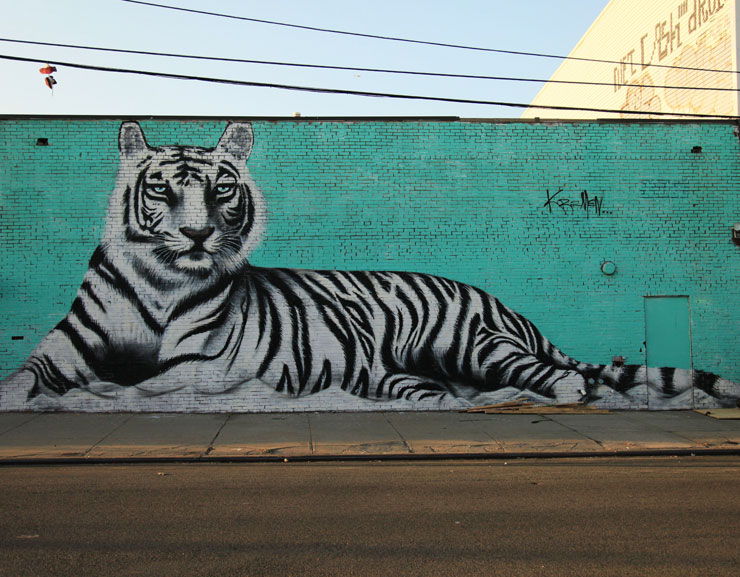