If you want to troll North Korea analysts, go the popular Facebook groups where they congregate. Write: "Are the latest round of sanctions good or bad?"

Almost immediately, a firestorm will descend. Egos will be bruised. Trash-talking will ensue. People armed with master's degrees will devolve into all-caps rage. Inevitably, someone will be called a Nazi.

It's quite a sight to behold. But if you aren't involved in North Korean affairs, you aren't likely to know about how sanctions-related questions are absolute bombshells in North Korea forums. That's because the field is largely divided into two camps - sanctioners and engagers. Unfortunately, arguments are commonplace and cooperation between the two is rare. Part of this may stem from the fact that most North Korea scholars are above the age of thirty-five; as non-digital natives, they haven't grown up on the wild, whacky Internet, where tone is easily misinterpreted. (Say what you like about those Reddit-reading Millennials, but in North Korean affairs, they have sharper netiquette and are less prone to digital meltdowns.)

One person who has been frequently targeted by this foaming-at-the-mouth rhetoric is Felix Abt. Author of A Capitalist in North Korea, Abt spent seven years in the DPRK running a pharmaceutical business in Pyongyang. Abt is either someone setting the groundwork for regime change in the DPRK, or simply a hard currency provider to the Kim regime, depending on who you speak with. Having worked with North Korean refugees for six years myself, I interviewed Abt for The Huffington Post regarding his views on sanctions, ethics, and how business can foster human rights-oriented reform in The Hermit Kingdom. 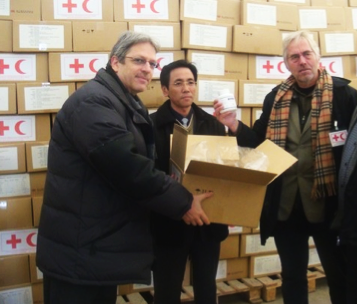 Abt's pharmaceutical company, PyongSu, was the first DPRK-based business to win a contract from The Red Cross and Red Crescent.

What do you see as the greatest barrier to change in the DPRK? Not enough change agents such as foreign business people, aid workers, diplomats and even tourists, exposing North Koreans to new ideas. And the few who are still active may soon be discouraged and gone too. One NGO from the United Kingdom is currently operating six bread factories, which helped improve children's health in Rason, Pyongyang, Hyangsan, Sariwon, Nampo and Gwail County. It has just reported it has become difficult to continue to maintain the factories due to new, foreign-imposed hurdles for its import requirements.

Do you think young Pyongyang elites be eager to see Chinese-style reforms? Young elites want more opportunities and are ready to accept changes that would help to bring them about.

How do you perceive the latest round of sanctions? North Korea is now denied to export its most saleable products - namely, metals, minerals, and even coal, which accounts for some forty percent of its exports. With the country losing most of its hard currency income overnight, countless families, trading with imported items across the country, will be pushed out of business and into poverty. The economy, which began to recover in recent years, will tumble and living standards will dramatically fall. Politically, Pyongyang has virtually nothing to lose. The likely result is a combination of more repression and fewer reforms, a shrinking middle class, and sharply rising poverty in the hinterland.

In your book, you talk about "the culture of aid dependence" in North Korea. How do you define that term? Let me illustrate it with the new U.S. sanctions law HR 757, which allows the export of medicine and food - but not the export of hitherto banned products. That is, certain equipment and chemicals necessary to manufacture medicine and foodstuff in North Korea. It makes North Korea dependent on medicine and foodstuff that is either generously donated or imported at a higher cost. What can aid workers do to avoid feeding this culture? I see it in a wider context. I would like to illustrate it with a striking example: Over the last 70 years, aid worth one trillion dollars was spent on Africa, the continent with the most failed states, and the only continent with a significant increase of hungry people. The Zambian economist Dambisa Moyo has demonstrated that aid [policies] in the world's poorest area, namely in Sub-Saharan African countries, have actually contributed to even more poverty and hunger. Concepts that are not only highly wasteful, but also lead in a completely wrong direction, need to be challenged - in African countries, in North Korea, and anywhere else. Is it correct that the Swiss agency dedicated to development has withdrawn from North Korea? Should it be reestablished? Why? The Swiss development and cooperation agency (SDC) did some exemplary work in North Korea. After the mass starvation in the nineties, it helped, for example, to develop a potato and double crop agriculture which multiplied the quantity of potatoes and substantially increased food output in general. And in the countryside, SDC helped breed millions of goats across the country for producing meat and dairy products. The Pyongyang elite was not the main beneficiary, but the populace in poorer provinces. SDC was also a co-sponsor of the first business school, an important reform project, to help bring responsible capitalism to North Korea. Such projects were aimed at fostering sustainable growth of local economies and at promoting reforms. It's regrettable SDC gave them up due to political pressure by anti-engagement advocates. 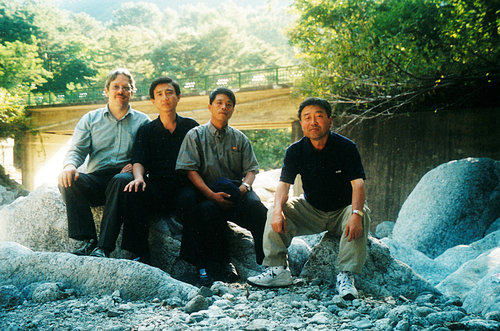 Koreans from both North and South joined up with Abt on one of his business ventures in Pyongyang.

Is there any chance the Swiss government will resume aid to the DPRK? Though neutral according to its constitution, Switzerland won't do anything that could displease the U.S. Remember, this is the country which gave up its bank secrecy and ceased to be a tax paradise under U.S. pressure, even while the U.S. built up its own tax heavens. In order to liberate North Korea, should human rights activists prioritize industrial development? If they want to be credible, they should first and foremost demand the lifting of sanctions that don't hurt the elites, but ordinary North Koreans. Sanctions also prevent middle classes, (which, from Indonesia to the Philippines to Taiwan, helped to transform authoritarian regimes to more democratic ones) from prospering. A North Korean entrepreneur who hired dozens of workers told me for example: "I can't expand any more as my plans to import from and export to Europe have been shattered by the financial sanctions which cut off North Korea's banks from the global banking system. I can't go with a sack of money to Europe to pay my suppliers and can't travel with an empty suitcase there to collect my money from my European customers." I personally see it as a two-pronged attack - using both underground and state-approved methods to bring reform to Pyongyang. All engagement helps to change minds and behavior patterns and promotes reforms, as I have experienced myself. Mao Zedong, called in the past "humanity's worst butcher," had been demonized like North Korea's leaders. But a conservative U.S. president stretched out his hand and normalized relations between the U.S. and China. This move helped lift hundreds of millions of Chinese out of poverty. Seventy years of throttling and cornering North Korea haven't helped to open it up, or make lives easier for its population. How much more time is needed for an approach other than the failed one? Namely, for a peace treaty and normalization at last, like in China's or Cuba's case?

How do you respond to critics who argue that business in North Korea only props up an evil regime? While some of the engagement and conducting of business in North Korea may be seen to "prop up" the regime, it, more importantly, also helps to transform it. The confirmation of the potential success of this approach can be clearly seen in the emergence of China and Vietnam, which was precisely because of such a strategy and of the opening of business to outsiders. Safer, effective and more affordable medicine my North Korean workers and I imported and produced must have helped to save numerous lives of ordinary people, not of the elites, as they had access to expensive imported brand pharmaceuticals instead. This was significant, as the lack of medicine must have killed more ordinary people than food shortages during the last fifteen years. To give you another example, safer mines thanks to 'our standards' and equipment I sold must have saved many miners' lives - and not those of the elites, since they don't work in mines.

I also introduced a course on Corporate Social Responsibility (CSR) at North Korea's first business school for executives where factory bosses learned that they could only become eligible as part of the supply chains of multinational corporations if staff were correctly remunerated and treated, and if the production was environment-friendly. As president of the European Business Association, the first foreign Chamber of Commerce in North Korea, I lobbied for a level-playing field for all businesses, Korean and foreign, state and private, for reforms and developing a law-based state.

That's not exactly what one could call "propping up the regime."