A coalition of business groups from the greater Chicago area this week sent a letter to Gov. Bruce Rauner and the four leaders of the Illinois General Assembly pleading with them to get a state budget passed and bring some stability back to the Illinois economy:

The failure of Illinois' politicians to pass a budget is having a devastating impact on our economy and its small business community. This inaction is causing our state to fall deeper into debt, hurting small businesses and causing many people to endure unnecessary pain. Hard-working Illinoisans are losing their jobs. The government's failure to pass a budget is having a profound impact on local communities, college students, non- profit agencies, and ultimately, will result in higher taxes.

Small businesses and entrepreneurs drive the Illinois economy and create jobs. In that regard, our organizations are full of hard-working business owners and their employees, who together, support our communities. Simply put, we can no longer watch political leaders threaten the viability of our local economies and do unnecessary damage to the state.

As the Democrats and Republicans blame each other for the budget impasse, things only are getting worse.

Moody's Investors Service this week followed up its October downgrade of Illinois' credit rating with an FAQ document that explained the reasons for the most recent downgrade and the steps necessary for Illinois to repair its credit. Chief among those steps is passing a budget that balances state spending with revenue.

The report telegraphed plans for more downgrades if the governor and General Assembly don't get a budget enacted soon:

The governor and legislature did not agree on a budget for the current fiscal year, and a budget accord appears unlikely before the halfway mark, on January 1. If Illinois fails to enact a budget with gap-closing measures, it faces a deficit that could drive its accounts payable backlog even higher than the peak ($9.9 billion) seen in November 2010, very early in the nation's economic recovery.

All this happens just days from the Dec. 1 budget meeting between Rauner and the four leaders of the General Assembly. It'll be the first time Rauner, House Speaker Michael Madigan, Senate President John Cullerton, House Republican Leader Jim Durkin and Senate Republican Leader Christine Radogno all have met on the budget since May. Expectations are minimal for substantial progress on Tuesday, but there's reason to believe a budget will be passed in January.

That's our topic on "Only in Illinois." 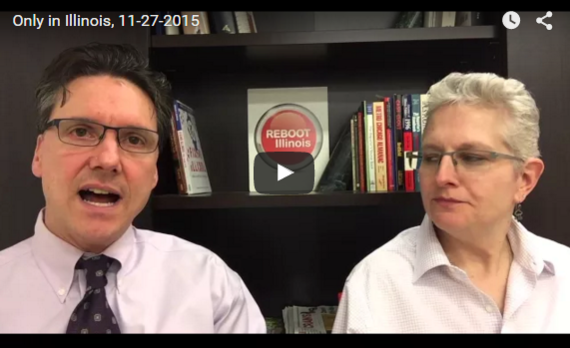 NEXT ARTICLE: Unemployment rates fall in every Illinois metro area, but not all have reason to be thankful