I daresay that after having to negotiate the piffle-marm from the editors of the New Republic, this piece from Henry Blodget over at Business Insider, titled "CHARTS: Here's What The Wall Street Protesters Are So Angry About..." is a more-than-adequate remedy.

Blodget comes to this with the sort of skeptical eye that the New Republic's editors simultaneously prescribe and repudiate. Of the demonstrators, Blodget is clearly critical: they "have not done a good job of focusing their complaints," he writes, before going on to note that their "early list of 'grievances' included some legitimate beefs, but was otherwise just a vague attack on 'corporations.'"

"Given that these are the same corporations that employ more than 100 million Americans and make the products we all use every day," he writes, "this broadside did not resonate with most Americans." That's fair. But Blodget continues:

So, what are the protesters so upset about, really?

Do they have legitimate gripes?

To answer the latter question first, yes, they have very legitimate gripes.

And if America cannot figure out a way to address these gripes, the country will likely become increasingly "de-stabilized," as sociologists might say. And in that scenario, the current protests will likely be only the beginning.

What follows is a meticulous analysis of the current state of income inequity, and, in the spirit of The Postal Service, he's provided "charts and graphs that should finally make it clear." Lots of them. You should go read the whole thing.

Blodget's "money shot" is this chart, which depicts the fact that "wages as a percent of the economy" are "the lowest [they have] ever been." But I'd like to highlight one part of Blodget's deconstruction, because I'm overjoyed he included it in his overall argument. 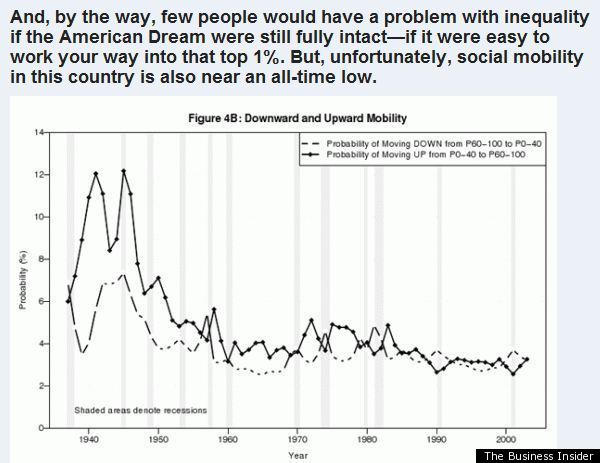 This is an excellent and important point. One of the sentiments that seems universal among the members of this movement who have shared their stories with the public is that while they harbor an anger about past decisions -- primarily the way they were hung out to dry after personally saving people on Wall Street from plunging into the abyss they'd dug for themselves -- they are far more concerned about the future ... and the sinking feeling that they do not have one. Absent any cogent policies to address the problem depicted in the chart above, their fears on this score will prove to be correct.

But beyond that, this summation of the current state of the world of haves and have-nots is the sort of thing that the folks in Zuccotti Park should be passing around to one another. Kudos to Blodget: where the editors of the New Republic just got a whiff of skepticism, turned tail, and ran from responsibility, he allowed his skepticism to fuel his curiosity, sought out answers, and produced something that can actually help foster the emerging protest culture. Like the protesters themselves have striven to do, this simple narrative of charts goes a long way to fighting invisibility.

READ THE WHOLE THING:
CHARTS: Here's What The Wall Street Protesters Are So Angry About... [Business Insider]