PARIS - Wandering the halls of the UN COP 21 climate summit venues here, it's easy to see how businesses are helping lead the way in real action on climate change.

*More than 150 U.S. companies, from giants like Apple and Autodesk to small businesses like Ohio energy efficiency company Energy Optimizers USA and Los Angeles-based Lakeshore Learning Materials, have signed on to the American Business Act on Climate Pledge, putting their money where their mouths are when it comes to cutting carbon emissions by going solar or reducing wasted energy in offices and factories.

*Giants like Google, BMW, Coca-Cola, Microsoft, Nike and Walmart are using the global stage of COP 21 to announce plans to get 100 percent of their energy from renewable sources as soon as they can.

*Even unexpected businesses are joining in the climate action movement, such as the cement industry and the healthcare industry, both of which made major pledges in Paris to reduce their greenhouse gas emissions in coming years.

Of course shareholders, investors and others need to hold these companies to these pledges.
If they do, it's good for our environment -- but also for our economy.

When BMW, Nike and Wal-Mart make their stores and factories more energy-efficient, it creates jobs at local lighting companies, HVAC companies and every other company that supplies those corporate giants.

And when captains of industry such as Bill Gates, Sir Richard Branson and Tom Steyer -- all of who are in Paris urging global climate negotiators to be ambitious in setting greenhouse gas reduction targets -- the world listens. 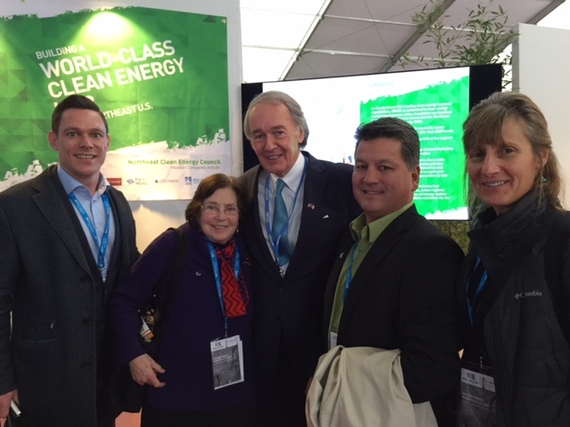 "What you see here are people who are going to protect what the president is putting on the table here in Paris as a promise from the American people to the world," Sen. Markey later told the Guardian newspaper.

Unfortnately, other short-sighted lawmakers back in Washington are promising to muddle and mess up a global climate agreement any way they can.

First, they voted against the federal Clean Power Plan to cut carbon emissions by cleaning up dirty power plants, increasing renewable energy and improving energy efficiency. Then, they threatened to cut funding to help countries switch to cleaner energy and deal with threats like sea level rise. Now, they're promising to stop the U.S. participation in a global climate agreement - even though they know they don't have the legal authority to do so.

Business leaders know it's a bad idea for Congress to get in the way of a global climate treaty. Doing so, they know, would send the wrong market signal to the rest of the world: A signal that while the rest of the world leads a transition to clean energy, some in the United States want to remain in the dirty energy dark ages.

Businesses are speaking out. This week, more than 250 business owners, investors and others signed on to a letter from Environmental Entrepreneurs asking Congress not to interfere with the Paris climate talks.
Thousands more signed a similar letter from the American Sustainable Business Council.

"Congress needs to get in step with business," said Amy Van Beek, a co-founder of the Fairfield, Iowa-based solar company that's grown from five employees to 30 in about a year. She cares enough about what's happening in Paris to attend UN COP 21 herself. "Addressing the central environmental challenge of our time is more than just a moral obligation to our children - it's also a huge economic opportunity."

"Defusing the threat of climate change won't be easy," Tucker wrote in a recent opinion piece in the Kansas City Star. "But thankfully many countries -- and companies -- are committed to building a more vibrant and sustainable future."

It's too bad some of our lawmakers aren't committed to the vision of a vibrant and sustainable future that so many business leaders know is possible.