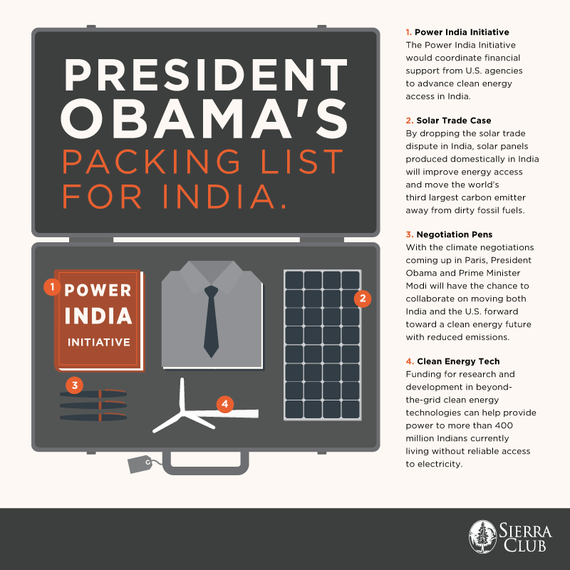 In the lead-up to President Obama's visit to India for Republic Day, environmental groups and solar companies -- including Sierra Club, Schneider Electric, OMC Power, d.light, SunFunder, and Simpa Networks -- have sent the President a letter calling for a "Power India" initiative to provide U.S. support for India's ambitious solar goals. This would be a an important building block of U.S.-India collaboration on climate disruption and could help create much needed international momentum on both short-term climate action and on a post-2020 climate agreement.

A "Power India" initiative would coordinate bilateral support from agencies such as the Overseas Private Investment Corporation (OPIC), U.S. Export-Import Bank, and USAID, with the goal of unlocking much needed support for clean energy projects and catalyzing the expansion of beyond-the-grid solar markets to help alleviate energy poverty. The call from environmental groups and solar companies asks for the U.S. government to draw lessons learned from the renewable energy aspects of "Power Africa" and to replicate its "Beyond the Grid" sub-initiative in India.

Approximately 400 million people in India lack access to electricity. Prime Minister Modi has set a goal of using solar to ensure that all households have at least one light bulb by 2019. Prime Minister Modi has also indicated goals of attracting $100 billion in investment in India's solar industry by 2022 and installing 100,000 megawatts of solar in the same time period. Through financial and technical support, the U.S. government can help India achieve these goals. It has been reported that the two leaders do intend to discuss India's solar ambitions during President Obama's visit, though the specific details around the extent of U.S. support remain unknown.

Large investments in India's solar sector signal that it is a good time for solar investment in India. Last week, SunEdison announced plans for a $4 billion solar equipment factory in India with local conglomerate Adani Enterprises, which will have an annual production capacity of 7.5 gigawatts. SunEdison also announced plans with Omnigrid Micropower Company, an India-based company, to provide off-grid solar projects in 5,000 villages in the currently, amounting to a cumulative total of 250 megawatts of power. It is likely that U.S. banks and companies will continue to seize the opportunity.

Expanding clean energy is an important component of addressing climate disruption and energy poverty, ensuring that the future is powered by clean energy that is accessible to all.