Alejandro Velez and Nikhil Arora were finishing up their last semester at UC Berkeley in 2009 when they stumbled across a business idea during a class lecture. Two months away from graduation, the two assumed they were headed into the corporate world of investment banking. Instead, they found themselves starting Back to the Roots, a consumer product company focused on growing gourmet edible mushrooms on recycled coffee grounds. 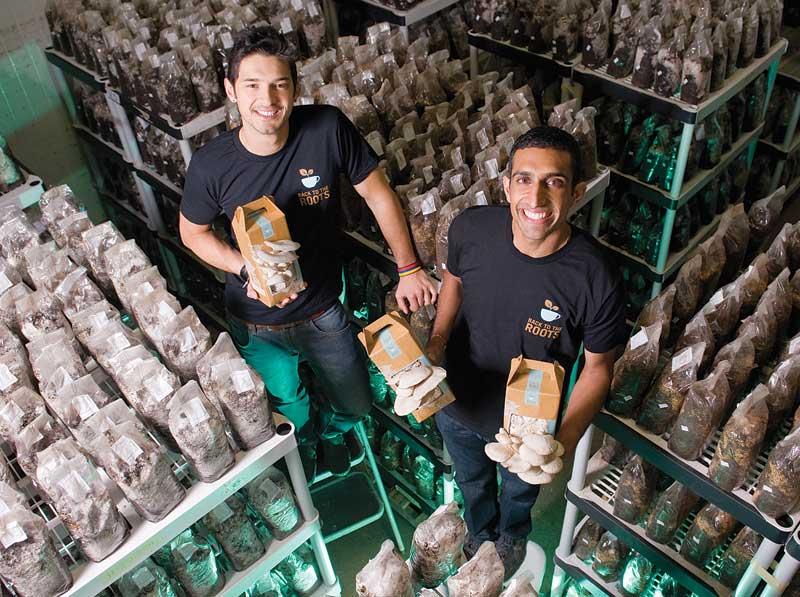 Velez and Arora don't consider themselves foodies. And the idea of helping people to embrace permaculture is far from what they studied at school, but Back to the Roots has been incredibly successful, and they never looked back.

Their foray into the edible mushroom business began with selling loose bulk wholesale mushrooms that they grew on coffee grounds. Normally, coffee grounds get thrown out, and you can imagine what a tonage of waste this produces. But coffee grounds are a fertile source of compost, which mushrooms thrive on. Initially, they produced around 500 pounds of mushrooms a week. As bulk orders began taking off and bigwigs such as Whole Foods got on board to purchase their mushrooms, Velez and Arora began to explore the idea of a consumer mushroom-growing kit. About a year ago, they realized they needed to focus their business model--loose mushrooms, or branded kits. They decided to focus on the kits.

Every kit contains about three pounds of coffee grounds--which Back to the Roots sources from reputable coffee companies such as Bay Area favorite Peets Coffee & Tea-- and oyster mushroom spores. It yields the happy gardener in the range of 1.5 pounds of mushrooms... that's just the first round. The kits are reusable. Pearl oyster mushrooms generally sell for around $12 a pound, so a Back to The Roots Mushroom Kit-- which costs $19.95--pays for itself after the first kit. And perhaps more valuable than the price of delicious mushrooms, the kit puts its owner in touch with the priceless experience of cultivating food from scratch.

But it's not just about mushrooms and coffee grounds. Back to the Roots' biggest focus as a company is inspiring people--especially kids--to get excited about growing their own food. "The kits are fun and easy enough to do, and show people a way to rethink where their food comes from, making eating personal again." says Nikhil. And they are dedicated to sharing the experience of growing gourmet food with non-foodies. Mainstream consumers should own this kit to experience the empowering joy of growing food from scratch. It's the size of a shoebox and it's fun and easy to do!

As entrepreneurs, one thing Velez and Arora have learned is social enterprise is a different world than corporate consulting. "There are so many people who are willing to help. We dont know all the answers, but we do know that if we keep on asking the right questions, our community is here to support us. We want to be super transparent, in our strengths and shortcomings, and constantly be open to new inspiration, mentorship, and guidance from the community around us." says Nikhil.

Back To The Roots is using social media to accomplish outreach and increase sales. For every photo of a successful kit that is posted on their Facebook page, Back to the Roots is donating a kit to a classroom of the poster's choice.

Because Velez and Arora have shaped Back to the Roots to appeal to non-foodies, they also market toward mainstream outlets like Bed Bath & Beyond, Home Depot, Nordstrom, Safeway and other traditional grocery stores. They are currently in about 400 Safeway stores and Home Depots, and are steadily growing, region by region. You can purchase a kit online or look for a store near you.

This piece is part of my Businesses With Impact series. I'm highlighting companies that fit within what I consider to be a scope of "significant social impact," meaning that they exhibit a high degree of operational awareness of corporate responsibility, social capital investments and philanthropy. While my research is not qualitative per se, I am confident about featuring companies doing inspiring things to change the world in real ways. If you have a suggestion for a company or individual to feature, please contact me.