As of Wednesday morning, The Top Kill effort has started.

Baltimore foundry owner Don Sanchez has been trying to reach BP to ask them to hold off on using drilling mud for the Top Kill tomorrow if it's not postponed, but he is in line with 17,000 other suggestions and time is of the essence. I asked him details of his proposal and the basics are that he feels drilling mud does not have enough density (specific gravity) to guarantee success. Sanchez' Chesapeake Specialty Products has 4,000 tons of HDM, a granulated iron product with specific gravity of 6.0, that he is willing to deliver to the Deepwater Horizon leak site if he gets approval.

When liquid epoxy binder is added, he feels it will produce a solid block under sea water. The company's HDM is currently used in radiation shielding, ship ballast and security barriers. With the Top Kill plan, Sanchez is concerned that "Once drilling mud fails, the probability of success with higher density product diminishes. If the proper mixes of granular size of any product is not used, there will be either premature plugging of pipe or lack of plugging at well head."

Here is the first half of my interview about the high density product versus mud and concrete, continued at NewOrleans.com along with a demonstration video link.. This is not an endorsement, just a post pointing out that better solutions may be waiting in line behind thousands of other suggestions.

Would the depth of the Deepwater Horizon well make a difference in how well your solution would work? Is there a chance it would set too soon before reaching the high pressured bottom of the well, or do your tests show that it's safe at that depth?

Sanchez: No it will not set too soon because we inject the activator at the last 20 foot of the pipe. There is no safety issue. The pipe is gravity flow so no moving parts except the small diameter pipe/hose to feed the liquid catalyst activator. The binder system is made of oil derivative and will set up hard upon contact and remain as binder forever. The heavy media I have is low carbon iron and steel with no heavy metals. Our iron oxide is used for fertilizer because it is so safe.

Could you use the same means of delivery that BP has in place for Wednesday's Top Kill? If not, does your company have something else you could employ on a timely basis?

Sanchez: From the diagram it appears we could use the planned mud kill feed tubes our material could be fed as slurry. The question is whether the pumps have the ability to push our heavy product. All our product is minus 1'2 inch so they would have to answer that. My plan was to use a simple straight 6" or 9" pipe to the bottom. With a hose attached at the base for the activator.

How have you tried to get through to BP and the government, and has there been any response aside from the Baltimore television interview?

Sanchez: Yes we have tried, again and again. I sent an additional form this morning. Still no response. They say they have 17,000 suggestions and ours is treated no differently than any other. What is frustrating is I have the heavy material on hand and the technology to make it set up under water and they do not.

Interview Continued at NewOrleans.com, along with demonstration video from Sanchez' television appearance. 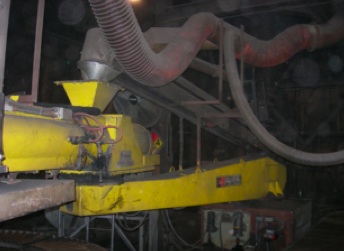