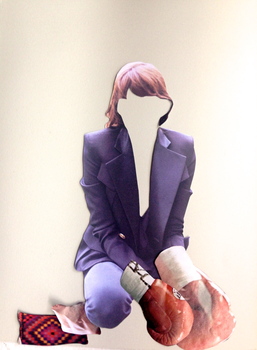 A STUDIO VISIT WITH BETTINA HUBBY

Bettina Hubby is an interdisciplinary artist with an impulse towards collaboration and integrating daily life into her art (and vice versa), all with large doses of humor. From cheeky collages of magazine cutouts, to dinner parties with construction workers beneath the twinkle of a disco ball hanging from a bulldozer, her work invites participation and engagement. Hubby has also created a temporary store based in Eagle Rock, selling only rocks and eagle items, and animated the desert with her over-sized "Googly Eyes for Giant Rock." Needless to say, the breadth of her work is impressive and keeps you guessing what she'll be up to next. I visited Hubby's studio in Silver Lake and talked with her about her process and current projects.

VB: My first introduction to your work was your show "Pretty Limber"at Klowden Mann last year, which exhibited some of your collage work and the vinyl cutouts placed on the walls, so mainly your studio based work. I loved the show so much that I wanted to see more and found that you do quite a bit of other things as well -- site specific installation, public engagement activities, ongoing collaborative projects with friends and artists. Could you tell me how you see the difference between your studio practice and your more public or collaborative projects? Do they fulfill different interests for you? Or maybe they function in the same way? 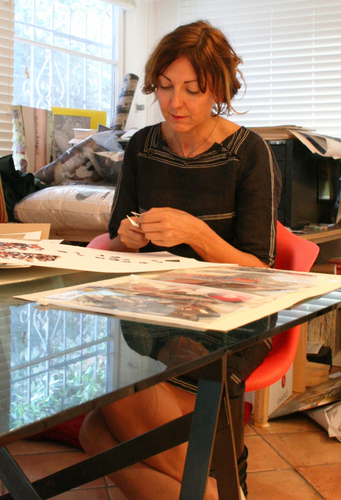 and then having people respond to it and then collaborating with them and making something that none of you could have expected. And then in the studio, reverting to a quieter place. It's very important, and I have to get better at it, honestly, I have to get A LOT better at it.

What do you mean by that?

Well, the silent practice. Really getting away from that compulsion to involve a lot of people with everything that I do. For instance, right now I am involved in this bigger project, which leaves me almost no time for the quiet practice. And I need to get better at balance.

Do you think it's about allowing yourself the time for yourself?

I think it's about saying "no." and scaling back and editing.

I think it's a bit of both. I don't really like to spend a lot of time, you know, wallowing; and I don't enjoying when other people do, so I'm trying to fill my life more with positive experiences as much as possible in this world that is very chaotic, and there's lots of feedback and white noise, and information. Whatever positive experience we can give to the other is really vital. I have a sense of humor and I enjoy others' senses of humor, and I figure if I can incorporate that as a medium it can be powerful. 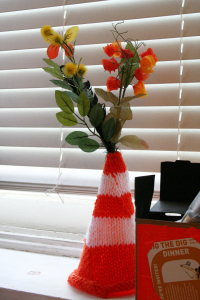 What is your favorite part of your process?

It certainly isn't the beginning, because it's too nerve wracking not to know if it's going to work! I think it's around that 78th percentile, when you've got the ball rolling and the train is moving and everything is coming together and you're seeing all the images. That goes for the quiet solo practice as well as the collaborative one, where you see the end in sight and you're pumped and excited, and so are other people as well.

What's the most challenging part?

The beginning, the blank canvas. There's a great book by Thomas Bernhard called Correction and it's about that crumpling up of that piece of paper with all your lists on it, and not knowing whether you're failing, just throwing it away and filling up that garbage can.

So it's about the attempt?

Yeah, it's about the attempt and that self doubt; this process of grappling with an idea whether it's important enough to follow through with, whether anyone else will care. I don't want to work in a vacuum; I do want to affect others in a positive way.

If one were to go check out your Facebook page right now, they would find that it's covered in breasts....images of boobs, stories involving boobs, boob jokes....tell me what's going on with that?

(Laughs) Well, that was, I guess, The Ultimate in testing out that theory that humor is good medicine. When I was diagnosed with breast cancer in January, I had to, sort of, decide rapidly what to do. It became a major crossroads as to whether to hide out and to be a little nugget by myself (with my family and friends of course) but not to be public about it, because of the shame and the fear and all those confusing emotions. Then I just kind of wiped that and made a decision to be public because that is a part of my nature and I felt like I'd be cheating myself and my nature if I didn't incorporate it into my world and my art. 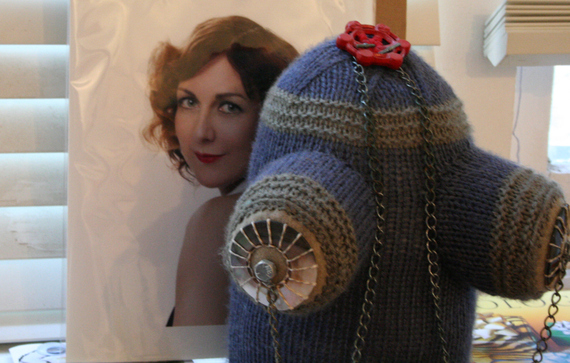 So I announced it ON Facebook, which was funny to me, but also startling; using the medium in a different way, with a health issue, but also using humor and just saying: look, I don't want any pity party here, I just want boobs. Send me boobs: pictures, poems, songs, whatever you can come up with to make me laugh. Because really I don't need anything else. It just became this free for all, and it was so energetic and exciting to open up that Facebook every day to find new images... from the most unlikely people that had been in my life for years and they were all sending me images of boobs, and all these multifarious and unexpected ways and it was just THE BEST thing I have ever done.

I'm so proud of my bravery, and also really thankful for people's acceptance and their willingness to participate in this way. And what I hear from others, it was a great way for them to cope and help. 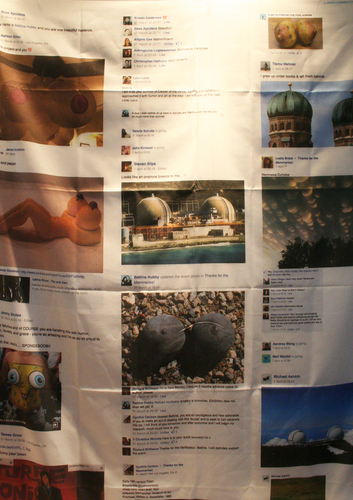 I thought it was special to be asked - even though you didn't ask me personally, per se, but that you would be so forthright with your community and even as far as it extends on Facebook....I think it's great to see what people, if given the opportunity, will do.

I'm actually going to make a full scale reproduction on silk of the Facebook feed. So it includes every post that I got from the day of the announcement to yesterday. I'm still getting things, but I have to cut it off somewhere! (laughs).

It could go on forever!

So that will be up at the show that I'm putting together.

Yes -- tell me about that show, "Thanks for the Mammaries," coming up at ForYourArt here in Los Angeles.

It just seemed a natural progression because I got all these images and I wanted to share them beyond the digital realm. I'm very tactile. I started to look for a space -- I really wanted For Your Art from the beginning, so I sent them a proposal and we found a slot that worked and they said "yes" which was just dreamy. I made the open call, I did not curate this, I just said "yes" to everyone, which may not be the best thing for my health, seeing as how I have 112 artists in the show! But in the end, it's a huge testament to the community and also it will raise some money for breast cancer research, and it's a nice kind of end point to this particular phase of my life.

What else are you working on in the studio?

I'm going to work on a whole series of collages about relaxation. (laughs)

Yeah, it's really funny and apropos.

Do you have any exhibitions coming up where we can see your work?

I am doing a show in November of a series of bronzes that will be slightly sexual in nature, but not obviously. For example, I have a slab of cheese and some Q-tips, a washing up sponge and some Vienna sausages...and I'll do some lithographs with it. That will be at 5th Floor Gallery, so looking forward to that and another year of adventure.

Bettina Hubby is represented by Klowden Mann in Culver City and her work can also be seen on her website. The show which she initiated and worked to organize in partnership with Klowden Mann, "Thanks for the Mammaries," will be on display at ForYourArt in Los Angeles, CA from July 31 - August 17, 2014. Works by over 100 artists will be on display, most of which are for sale. Funds raised at the exhibition will go towards breast cancer research. Opening reception will be Thursday, July 31st from 7-9pm. 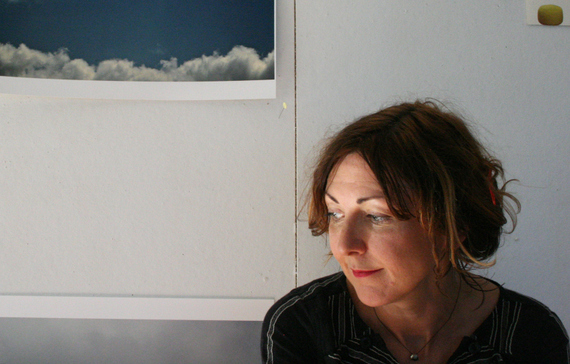 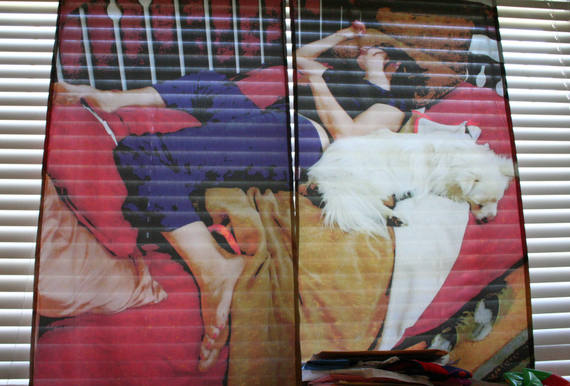 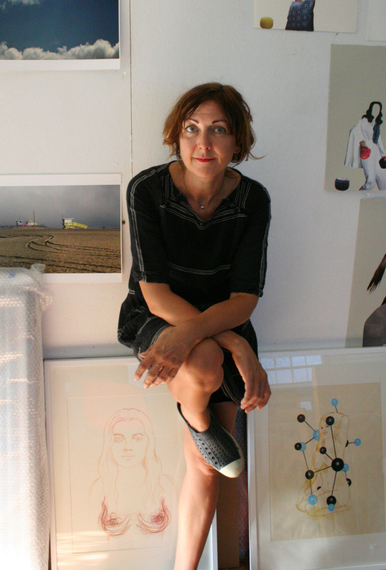