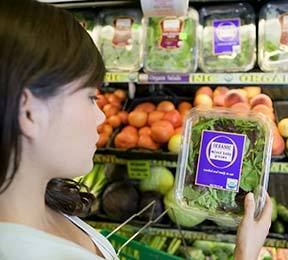 If I am going to eat something bad for me, I want to know it and enjoy it (mmm ... raspberry pound cake this past weekend ... but I digress). What I don't like is trying to eat nutritiously and then finding out that my food comes with a side of harmful substances. I especially don't want to give these substances to my toddler. But, not only can it be overwhelming to know what to avoid, inconsistent labeling makes it even more challenging.

So, what's a person to do, short of get her PhD in chemistry? (I know that you readers are massively smart and accomplished, and some of you may take that challenge seriously). You don't need to -- consider this your cheat-sheet.

1. Minimize antibiotics - and "antibiotic-free" doesn't always mean that. Many farms feed antibiotics to livestock to increase the animals' size (and meat production). It's estimated that up to 80% of the antibiotics produced in the U.S. are used in livestock, but there is no standard labeling definition for antibiotic use. Why does it matter? Antibiotic-resistant infections (Superbugs) are becoming a significant problem -- and giving antibiotics to animals that aren't sick promotes the development of resistance.

What to buy: There are multiple antibiotic-related labels -- and not all ensure that your meat is antibiotic-free. Look for phrases such as "Raised without antibiotics" or "No antibiotics". If it has that plus a "USDA Process Verified" logo, the USDA has verified the antibiotic claims.

What's clear: There are definite benefits to eating organic produce, including sustainability and global impact.

What's less clear: What level of "organic pesticides" end up on the produce (I used to think that organic means "no pesticides." I was incorrect -- they simply avoid synthetic ones). The fact is, we need more data. When the USDA tests produce for pesticides, it tests hundreds of conventional (not organically grown) samples and usually only two to five organic. According to Sonya Lunder, senior analyst for the Environmental Working Group (EWG), there's no conspiracy here; the USDA samples according to the ratio of conventional/organic produce eaten in the U.S. As a result, while the few organic samples show fewer pesticides, we just don't know enough about the amounts or health impact to compare "apples to apples."

What to buy: First, keep eating fresh produce. If organic is too expensive, buy conventional (eating real foods is always healthier than processed), or select produce with lower pesticide levels. According to Lunder, regardless of growing method, produce with thick peels (pineapples, papaya, sweet corn, and mangoes) absorb less pesticide, period. Some cruciferous vegetables (cabbage, cauliflower) have a natural pest resistance. Those traditionally grown in smaller plots (such as kiwi or eggplant) make less of a target for insects -- which means they require less repellant. That's why these make up the majority of the EWG's "Clean 15." (Check out their "Dirty Dozen" to see the flipside.) Of course, score another point for a diverse diet. The more variety of produce you eat, the less likely it is that you'll be exposed to too much of any one kind of pesticide.

3. Seafood is good; mercury is very bad. Remember the Mad Hatter in Alice in Wonderland? Well, it turns out that he had mercury poisoning (common to hat-makers in the 19th century and causing psychiatric and brain disorders. Most of us aren't making hats (aha! I just found justification for having no "crafty" talents or Etsy market!), but a major source of exposure to mercury is in our diets, especially in fish. Some fish contain high amounts of mercury in the form of methylmercury, which causes neurologic damage, especially in fetuses and young children. But fish are a great source of protein, good fats and other nutrients, so you do want to incorporate them into your diet.

What to buy: Aim for fish with low mercury levels (wild salmon, sardines, mussels, rainbow trout and Atlantic mackerel) and minimize/avoid those with consistently high levels (shark, swordfish, tilefish, and king mackerel). I'm also a fan of the Environmental Working Group (EWG)
Seafood Database, which gives more detailed information and advice according to your age and health.

4. Your food containers can make you sick. How you store your food makes a difference. This is especially the case with plastics, including those containing Bisphenol A (BPA) and new, once-thought "safer" substances, such as DINP and DIDP, now found to have their own risks. BPA has been linked to diabetes, heart disease, fertility problems and neurobehavioral changes. The good news? The majority of exposure is via our food containers and avoiding these will significantly reduce your levels.

This content originally appeared on Sharecare.com. Listen to her interview with the EWG about their Food Safety Database.

More:
healthy livingPesticidesHealthantibiotics in meatorganic
Newsletter Sign Up
The essential guide to taking care of your mind and body
Subscribe to HuffPost’s wellness email
Successfully Subscribed!
Wellness delivered to your inbox