I heard it with each surrender at the shelter. I see it in posts to social media. Dogs labeled by their restrictions. We label dogs by breed, we labels cat by color and we label temperaments by... hearsay? Of course we all know a dog is more adoptable if he gets along with kids and other animals, and we don't want to withhold important information from potential adopters, but is it possible that we judge the dog based on an initial surrender evaluation? 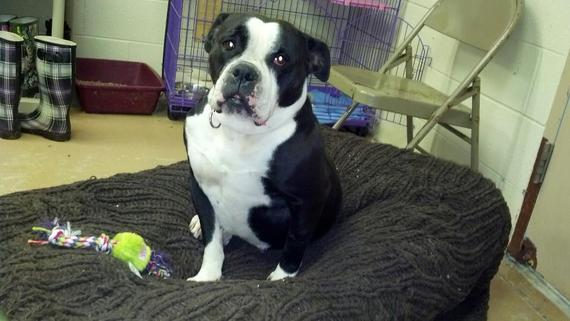 Starfire was considered to be a single dog only home, but her adopters helped her overcome that. Source: author

There are many steps we take to help a dog find a new home. I listen to the person handing me the leash, raving about what a wonderful dog I have here before me and wonder why they are surrendering the perfect dog. We should be able to get a general idea about how the dog behaves from the owner, but that doesn't mean he'll act the same in the future. The dog may have been just a puppy when he was brought into a household with a two year old. Getting along with children may mean the dog tolerated the child pulling his ears and tail. If I hear, "When my kid's friends come over, he doesn't bother them, but hides in my bedroom until they are gone," I don't accept that as a dog getting along with children. A dog who cutely shares lunch with a toddler he's lived with his entire life does not necessarily mean he shares with everyone.

So what happens when we decide to adopt to a household with kids twelve and over only? Does this allow the adopter to hold a shelter liable if the dog bites a thirteen year old? I prefer to base my decision regarding an age appropriate household on the individual family member responsible for the child and the child's level of maturity. We are working hard towards looking at dogs as individuals; shouldn't we do the same with humans?

We all know that a dog who gets along with other animals, children, people in wheelchairs, the mailman and meter reader are highly adoptable. So do owners of dogs who are looking to surrender. They want you to take that dog from them and may not think you will if they reveal everything about the dog. Initial cat/dog/fake hand tests are skewed when the dog is suffering from stress and confusion. I might bite at a stranger or refuse food in a new place with loud sounds and foreign smells, too! I've seen dogs being evaluated for surrender refuse food and get cleared of resource guarding when it's taken away. A few weeks later, the dog gets comfortable and returns to resource guarding like he did in his former home. It takes time for a dog's temperament to reveal itself. Luckily, it can be corrected, but it may narrow the selection of adopters because of his habits. Do we steer a potential adopter away from that dog because we assume the adopter can't handle it? 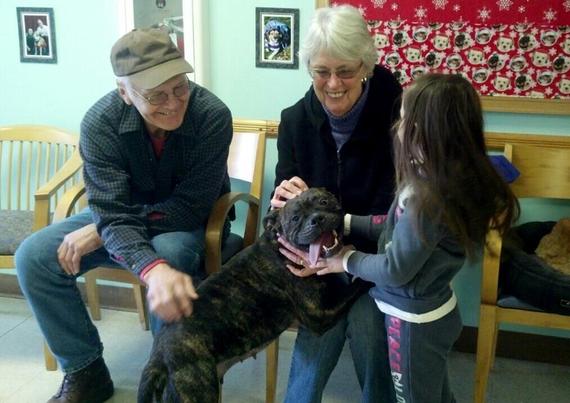 Laila arrived with a litter of four and no history. Happy ending here! Source: author

There is no clear solution to this predicament. We must continually evaluate and explore the individuals relying on us to find a home. We must be willing to work through the undesirable behavior with positive interaction. The dog who changed the way I viewed shelter behavior was a quirky girl we pulled from an overcrowded shelter on Long Island after Sandy. Every day, week after week, month after month she left poop paw prints on her ceiling because she frantically spun in her kennel. She charged the door of her kennel whenever someone passed by and scared away potential adopters. She failed the cat test. She was sketchy with other dogs. She was mouthy and grabby, so kids were excluded. A volunteer offered to take her home for an evening, and with much trepidation, I agreed, although I was queasy with worry about how it would go.

That evening, the volunteer emailed me pictures of Phoenix napping in a chair after she had done her business outside and in the presence of cats. We started taking her to adoption events and she was completely gentle with children. We eased her into playgroups and found out she preferred bigger dogs. Here was a clear example of how we held this dog's progress back by narrowing her options because we believed her shelter behavior reflected her outside behavior. She was mouthy and grabby because she was desperate for attention. She was barrier frustrated and she was stressed out. Phoenix did find a home a few months later.

Once we let go of our expectations that a dog will live up to the labels he is given, we can help shape the dog's future success. Last year, I adopted a dog from animal control an hour away from me. No history, no temperament testing -- I just liked her pitiful picture on my Facebook feed. She tried to eat my cats. Literally. She antagonized my dogs incessantly. The pound told me I was on my own, and two months later, I begged a friend with a rescue to help me place her. Maggie was in foster less than a week when the foster went on vacation, so I had to take her back. My husband and I barely sat, always waiting for her to attack, but we also kept her in the mix and not locked away in a back room. We intervened when necessary and rewarded desirable behavior. The strangest thing happened. She learned that we didn't like it when she went after the cats and the dogs didn't like her when she antagonized them. The foster called two weeks later to say she was home, and I told her we were fine. It took almost four months, but harmony returned to my home. I had no idea where Maggie came from or what her life was like before us, but I know that her future will always include us. 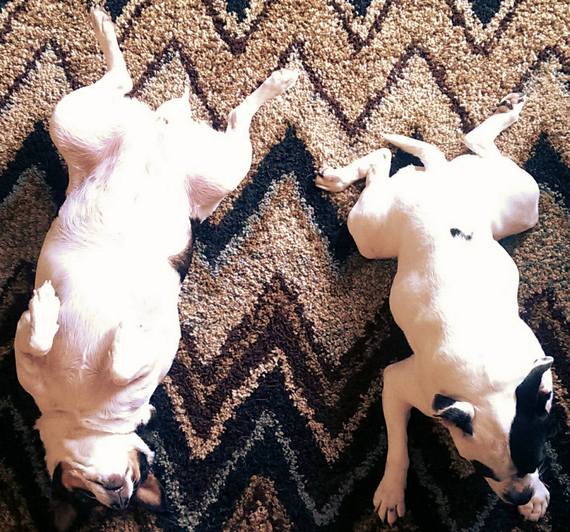