Hearing your engine purr is NOT always a good thing.

Robert Avery of Palm Coast, Fla., thought there was a frog stuck above his tire Aug. 27th, but when he and his son jacked the vehicle up, they found something much cuter.

"A little kitten was wedged in between the suspension," Avery told WESH.

Avery figured out that the feral feline lodged himself under the car the night before, 38 miles away in Daytona Beach, where Avery works. Avery says he drove home going at least 65 miles per hour, and calls the blue-eyed cat "very lucky" to have survived.

It took Avery and his son about 30 minutes to free the kitten, who was covered in oil. "He was filthy. He was nasty. He was covered. He was a nasty little fellow," Avery said.

Avery has decided to adopt the nasty little fellow, who he named "Butch."

It's been a rough couple of weeks for cats nationwide.

Last week, a cat named "Wasabi" survived an 11-story tumble out of an Alaskan apartment after she chased a mosquito out the window.

Also in Alaska, Stubbs, the feline mayor of Talkeetna, is currently recovering after a dog attack in late August. 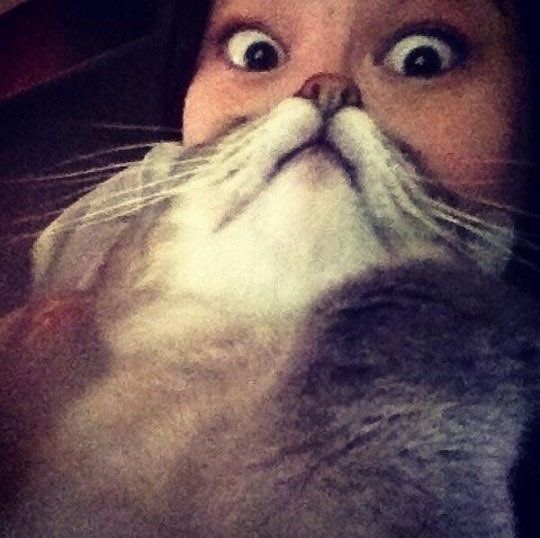 1 / 12
The latest sensation sweeping the information superhighway we call the internet is the "Cat Beard". This involves picking up your cat, lifting him up to your nose and then taking a selfie, giving the viewer the illusion that you have grown a fluffy luxurious beard - but in fact you have a cat stuck on your face... enjoy! (Credit: WENN)