In a slightly ironic turn of events, increasingly health-conscious Americans have rediscovered a passion for a notoriously unhealthy ingredient: butter. Americans are eating more butter today than they have in 40 years, according to ABC News. 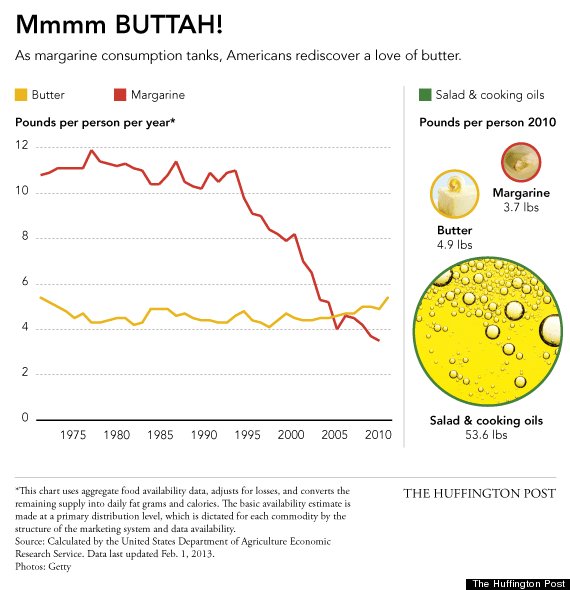 Butter consumption per person has increased 25 percent in the past decade, reaching 5.6 pounds annually, up from 4.1 pounds in 1997.

What's behind this uptick in butter consumption (besides, of course, that butter is delicious)? For one, Americans are eating less margarine. As consumers have become more aware of the health risks of trans-fat, they're cutting back on margarine, which is chock-full of it. Foods with trans-fat have been disappearing over the past decade, and in November, the FDA proposed a trans-fat ban.

Americans are also increasingly placing a higher value on products with fewer ingredients. They "want to understand all the things on an ingredient list. Butter fits perfectly. It's either just cream or cream and salt," David Riemersma, president of the American Butter Institute, told the Los Angeles Times.

Margarine is actually cheaper than butter, according to ABC. People are willing to pay more for butter because they are "willing to pay a premium for the real thing -- especially if it's organic, free from pesticides and GMOs," says Albert Straus, owner of the Straus Family Creamery.

Still, butter isn't the most popular fat. Oil trumps both butter and margarine by a long shot. In 2010, American consumed 3.7 pounds of margarine per person, 4.9 pounds of butter and a whopping 53.6 pounds of salad and cooking oil. Apparently Americans love their butter, but they love their oil even more.